Purpose: The purpose of this study was to establish a simple, accurate, rapid and sensitive method using LC-MS/MS for the quantification of paclitaxel and erlotinib from PLGA nanoparticles, in vitro release samples and plasma samples.

Methods: Instrumentation and operating conditions - The chromatographic separation was achieved using a Perkin Elmer Series 200 HPLC systems. Chromatographic separations were achieved using Discovery C18; (50x4.6, 5µm) column and a mobile phase consisted of 0.1% formic acid: ACN (70:30;v/v). The flow rate of the mobile phase was set at 0.6 mL/min with injection volume of 5µL. Samples were analyzed with an API-4000 Q Trap mass spectrometer with electrospray ionization (ESI) source, operating in positive ion mode. Method Development - The HPLC-MS/MS method was simultaneously developed for the quantification of paclitaxel and erlotinib from aqueous samples of nanoparticle formulation for the determination of their load, entrapment efficiency, and to analyze the IVR samples as well. Liquid-liquid extraction method was developed to quantify samples from plasma. Partial method validation, as per USFDA guidelines: Selectivity - The selectivity of the assay was evaluated by analyzing blank plasma samples from eight different donors and spiked plasma samples at LLOQ level. Linearity and sensitivity - The linearity of the method was determined by the analysis of standard plots associated with a nine-point calibration curve. Calibration curves from accepted three precision and accuracy batches were used to establish linearity. Accuracy and precision - Intra- and inter-day accuracies were expressed as a percentage of deviation from the respective nominal value and the precision of the assay was measured by the percent coefficient of variation(%CV) at different concentrations. Stability - The absolute stability in plasma was assessed at 8.95 and 755.03ng/mL for erlotinib and 15.00 and 1175.00ng/ml for paclitaxel during the sample storage and processing procedures. Bench-top stability was assessed at RT for 7.25 hours. Long-term stability was assessed after storage of the test samples at around –15 °C for 36 days. Recovery - Recovery was estimated at three QC concentration levels (low, medium, high) by comparing the mean peak area of all the analytes in the QC samples(n=6). Matrix effect - The matrix effect was assayed at two concentration levels (LOQQC and HQC).

Conclusion: A method with significantly reduced run time of 2.5 minutes was developed and duly validated to simultaneously detect and quantify paclitaxel and erlotinib from its nanoparticulate formulation for both in vitro samples as well as in vivo plasma samples. The method development was exceptionally challenging due to the evident chances of stability/ interaction related issues, choosing of the appropriate internal standards and mobile phase. The above challenges were successfully met while developing the method through critical screening and optimization of the internal standard as well as the mobile phase. 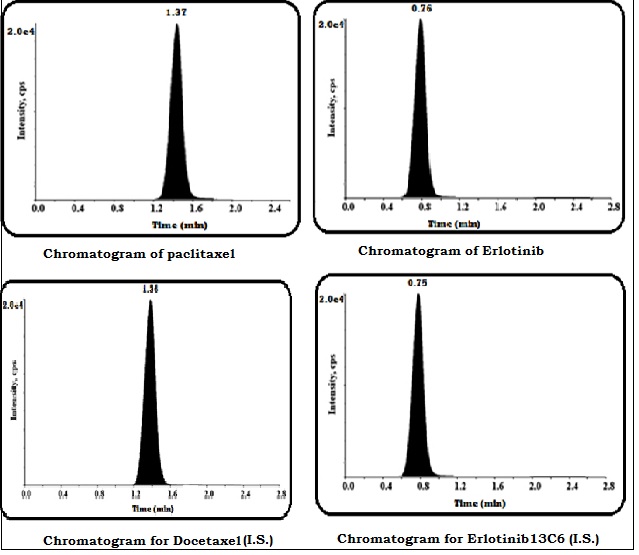 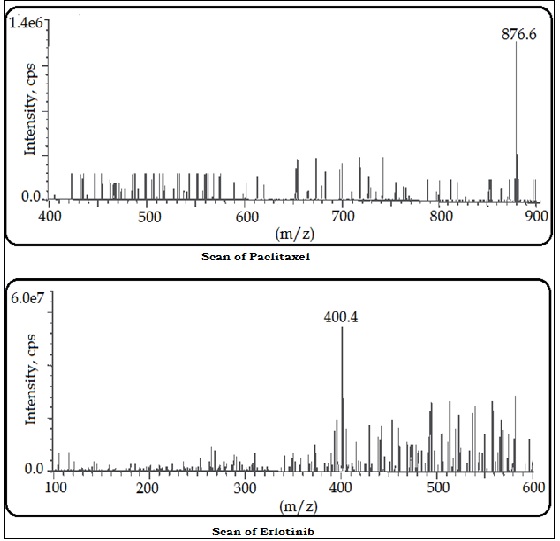 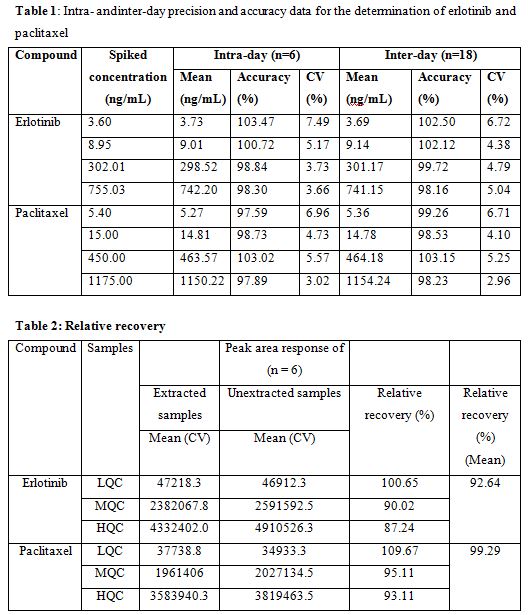