Purpose: Gamma scintigraphy is a proven imaging technique used to visualize the in vivo performance of pharmaceutical dosage forms. Combined with pharmacokinetic (PK) analysis, the clinical outcomes provide a holistic understanding on the impact of formulation composition, patient factors and human physiology on in vivo drug absorption. For oral solid dosage forms, Technetium-99m and Indium-111 are the most commonly used radioisotopes for scintigraphy studies. These radioisotopes can be incorporated into the formulations either as chelate complexes or using ion exchange resin as a carrier during manufacture or directly spiking into the drug products. For multiparticulate formulations, direct incorporation of radioisotopes is not feasible due to particle size. One approach is to use direct incorporation of the natural isotope samarium-152 oxide during the manufacturing process followed by neutron activation to convert it into its radioactive form, samarium-153. However, this approach involves a long and complex process with variable radioactivity and poses risk on the drug product stability during neutron activation. Alternatively, suitable radiolabeled surrogate particles with the same size, density and surface properties as the drug-loaded multiparticulate formulation can effectively provide information of the gastrointestinal (GI) transit of the co-administrated drug formulation, to aid interpretation of associated PK data. In this study, a novel radiolabeled surrogate technique was developed using a Hot-melt Pickering Emulsion method, which allows modification on the surface properties with functional polymeric excipients to achieve similar properties as the active drug product for delayed or sustained release delivery, hence matching the movement of the active product along the GI tract following co-administration.

Methods: Non-digestible high melting point Compritol 888 ATO (glyceryl behenate) was first melted at 75°C. The required level of indium-111 radioactivity was extracted into ethanol before incorporating into the molten Compritol. Solid emulsifiers such as Eudragit S100 or ethylcellulose N7 was used as functional excipients by dispersing into water and heating to 75°C. Molten Compritol containing indium chloride was added into the emulsifier dispersion at 75°C with continuous stirring using an overhead stirrer at different speeds to achieve the required droplet size. After sufficient mixing, whilst gradually cooling down, droplets of Compritol were solidified and spherical beads were formed, with indium chloride entrapped within the core and functional polymer excipients attached to the particle surface. The resulting surface modified radiolabelled surrogate beads were recovered via wet sieving followed by oven drying at 40°C. Formulation yield and radiolabeling efficiency was determined. Raman micro-analysis was performed on the beads to confirm the surface modification with the functional polymers. Integrity of surrogate beads was determined via a radioactive leak test in the form of a three-stage dissolution, which started from pH 1.2 (2 hours) to pH 6 buffer (4 hours) and finally pH 7.2 buffer (26 hours). Radioactivity of beads sample was taken at time points to determine loss of radioactivity from the core.

Results: The method successfully yielded solid radiolabelled beads with a comparable density and particle size to the active dosage form, which allowed for imaging and tracing of the active multiparticulate drug product in vivo. Prior to drying, the surrogate beads was screened to collect samples between 500 µm - 850 µm to mimic the size and density of the active beads (Table 1). The density of the surrogate beads was 0.55 g/mL which is comparable to the active multiparticulate (0.61 g/mL). The delayed release or sustained release functional excipients mimicked the active beads, thereby ensuring traceability in the GI tract. The final yield of the radiolabeled beads is 15.2 MBq in 2 g with radiolabeling efficiency of 61.4% to give the radioactivity of 0.8 MBq per 100 mg which met the standard radioactivity per dose for oral gamma scintigraphy study of no more than 1 MBq. The surface properties of the surrogate beads was analyzed using Raman micro-analysis and the results confirmed the existence of functional polymers on surface of the surrogate multiparticulate formulations. The radioactive leak test results in Figure 1 demonstrate that the surrogate beads has successfully entrapped the radioactivity for up to 32 hours with less than 10% losses over this period in the test media at 37°C with no size and shape change observed.

Conclusion: A novel radiolabeling technique was successful in producing surrogate beads with comparable size and density to active multiparticulate beads. Surface modification using functional polymers was applied to the surrogate beads in order to mimic the active product to ensure comparability in GI transit. The Raman micro-analysis confirm that this radiolabel surrogate approach was capable to generate a bespoke carrier, which matches the active beads to ensure maximum traceability. Surrogate beads were able to maintain a sufficient level radioactivity to allow imaging to be performed throughout the dosing window of the active product. 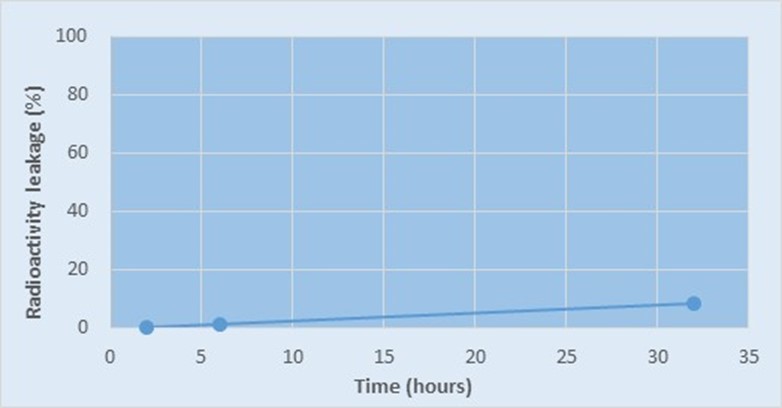