Oral drug delivery is preferred for pediatric patients due to the ease of administration. However, many drugs taste bitter, and overcoming this bitterness is a major barrier in developing a successful product for pediatric patients. Compliance rates as low as 11% have been reported in children due to palatability/taste as well as swallowability and dose adjustment issues (1). Therefore, these attributes should be considered when developing drug delivery systems for children.

Spray drying is commonly used in the pharmaceutical industry and several publications report its use in taste masking the bitter drugs (2-3). However, conventional spray drying produces microparticles, whereby a drug is generally distributed throughout the particulate matrix, including on the particle surface. Upon administration, drug on the surface is likely to interact with taste buds, rendering the method ineffective for taste masking, especially for highly bitter drugs.

Methods: Acetaminophen (water-soluble) and ibuprofen (poorly water-soluble) were selected as model bitter drugs. Solutions containing each of the model drugs were spray dried with various polymethacrylate polymers, including Eudragit E (soluble at pH < 5), Eudragit L (soluble at pH >5.5), and Eudragit RS (insoluble). The effects of the polymer system and the polymer to drug ratio on morphology, particle size, microparticle yield, and drug release were determined.

The intermediate cores were prepared using a Büchi mini-spray dryer B-290 equipped with a 1.7 mm diameter conventional (two-fluid) nozzle and nitrogen as the drying gas. The inlet air temperature was set at 120 ± 5℃ and the outlet air temperature was 50 ± 5℃. The aspirator rate was 100% with a combined pump flow rate of 4 ml/min and a nitrogen gas flow rate of ~740 L/h. These intermediate cores were characterized using scanning electron microscopy (SEM), laser diffractometry (LD), differential scanning calorimetry (DSC), and in-vitro drug release. Potency was determined using high-performance liquid chromatography (HPLC).

Results: Intermediate cores with each polymer system were successfully prepared by spray drying. Relatively high yields for L- and E- systems were obtained (~ 80-90%), whereas yields with the RS polymer were low (< 20%). The potency for all systems were > 90% of theoretical drug loading. Microparticle morphology was dependent on the polymer/solvent system. While most formulations resulted in discrete, spherical microparticles, Eudragit L/ibuprofen dissolved in 50:50 water:ethanol produced irregular shaped microparticles and collapsed microparticles were observed when Eudragit E/ibuprofen was dissolved in dichloromethane.  Acetaminophen released rapidly from the intermediate cores once suspended, irrespective of the polymer system used and even at high polymer to drug ratios (19:1). In contrast, the release of ibuprofen was dependent on the polymer system, as shown in Figure 2. The release of ibuprofen from the E-polymer intermediate cores was rapid, similar to that observed for the water-soluble acetaminophen. In contrast, ibuprofen release from the intermediate cores containing the L polymer plateaued and was correlated to the maximum solubility of the drug. Ibuprofen slowly released from the RS-microparticles over a 30-minute timeframe when tested in pH 6.8 media.

Conclusion: Drug dissolution from the intermediate core microparticles was not retarded for the model water-soluble drug acetaminophen. In contrast, the release of poorly water-soluble ibuprofen could be adequately retarded when suspended in low pH, which correlated to reaching a saturated solution of drug in the test media. Yields for the spray dried intermediate cores were high for the E and L polymer systems, whereas low yields resulted when the RS polymer was used. Future studies will use a three-fluid nozzle configuration to encapsulate the optimized intermediate cores for taste masking applications. 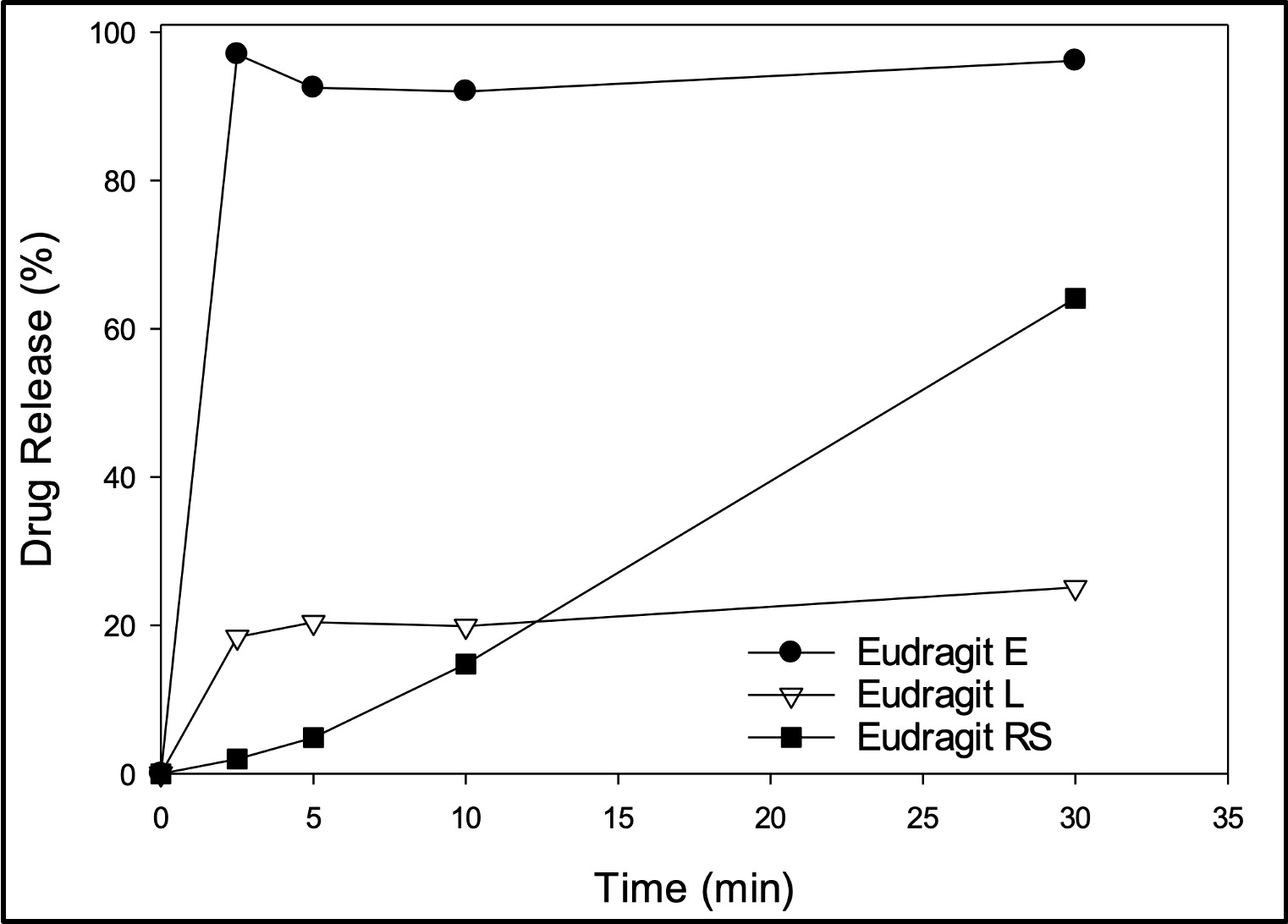