Purpose: During hot-melt extrusion (HME), thermal and mechanical energy inputs convert crystalline API amorphous and dissolve the API into a carrier polymer to form amorphous solid dispersions (ASDs) which have increased water solubility over their crystalline forms. In order to successfully process these ASDs, generally, the temperature during HME processing must be above the glass transition temperature (Tg) of the drug-polymer systems and near or above the melting temperature (Tm) of the API. One challenge in HME is processing API which has a Tm near its degradation temperature. With these drugs, the range of thermal and mechanical energy inputs that will successfully form an ASD without degrading the drug is narrow, which can make processing difficult. In addition to the heated barrel, the mechanical energy input, via rotation of the screws, is converted to thermal energy which increases the temperature of the barrel during processing. Because polymers and API generally have low thermal conductivity and so do not transfer heat rapidly, local hotspots can occur due to uneven friction inside the barrel; these hotspots can increase local temperatures above the degradation temperature of the API. This work describes the incorporation of a thermally conductive excipient (TCE) into a drug-polymer system to increase the design space of ASD formulation by HME, without altering dissolution behavior. Nifedipine (NIF) was chosen as a model poorly water-soluble drug that degrades near its Tm and Candurin (potassium aluminum silicate) was selected as a model thermally conductive excipient (TCE).

Methods: Physical mixtures of 40:60 NIF:copovidone (VA64) and 40:57:3 NIF:VA64:Candurin were prepared, where the VA64 was dried overnight. Mixtures containing NIF were protected from light at all times due to photolytic degradation. HME was performed on a Nano-16 Leistritz extruder at 3 g/min at various temperatures and screw speeds. The extrudate was tested for amorphicity by XRD, DSC, and PLM. A non-sink pH transition dissolution test was conducted to determine the solubility of nifedipine in the formulations. HPLC determined the potency and solubility of these extrudates.

Results: At all HME conditions which resulted in the formation of an ASDs for NIF:copovidone compositions, the compositions containing Candurin were also amorphous as confirmed by XRD, DSC, and PLM. Both compositions processed at 130C and 300 RPM exhibited similar dissolution profiles, achieving a 6x increase in solubility compared to crystalline drug. Potency testing of Candurin containing extrudate processed at 160C and 100 RPM showed a yield of 99.31% +/- 0.30% (n=3). Peer-reviewed data reports NIF:VA64 extrudate processed under identical conditions yielded a potency of only 89.97% +/- 0.69%1.

Conclusion: The addition of a TCE to ASDs formulated by HME expands the processing window by increasing the maximum thermal and mechanical energy input which can be used before drug degradation occurs. TCEs accomplish this by increasing the thermal conductivity of the drug-polymer blends during processing which reduces the tendency of local hotspots to form due to their otherwise low thermal conductivity. The inclusion of a TCE will be beneficial when processing API that degrades at similar processing parameters to those which are required for the successful of extrusion of ASDs. 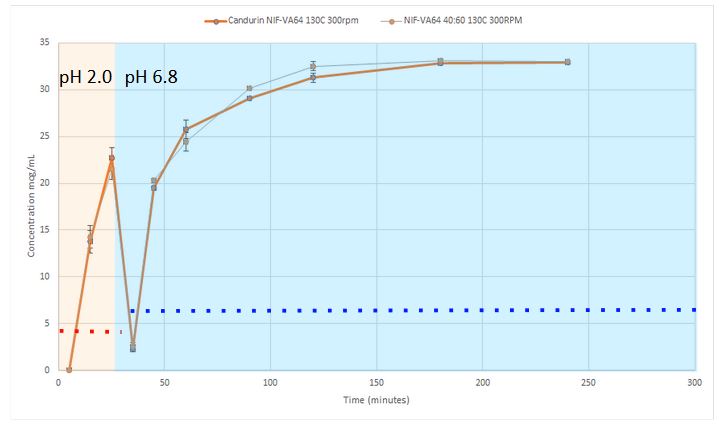