Intranasal Delivery of Insulin by Self-emulsified Nanoemulsion System: In Vitro and In Vivo Studies

Purpose: Tremendous efforts have been made to develop a non-invasive insulin (Ins) delivery system to overcome invasive delivery challenges. The only non-invasive insulin product currently available in market is Afrezza, which has several disadvantages such as throat irritation, modest reduction in lung function, transient non-productive cough etc. Therefore, there is still a need to develop a formulation which can effectively deliver insulin via non-invasive route. Intranasal delivery of protein and peptide drugs presents myriad benefits such as noninvasive needle-free administration, rapid onset of action, relatively large absorption area (150 cm2), high permeability, limited enzymatic activities and the avoidance hepatic first-pass effects.

Purpose: To develop an o/w self-emulsified nanoemulsion (SEN) dosage form of insulin where insulin is loaded in the oil phase of the nanoemulsion for enhanced nasal absorption. Hypothesis: When loaded into the lipid droplets (oil phase), insulin can be protected from enzymatic degradation, can permeate through the mucus gel barrier in a comparatively efficient manner and can be absorbed through transcellular permeation along with paracellular route.

Methods: Soy-L-α-phosphatidylcholine (SPC) was used as a complexing agent to incorporate lipophilicity to insulin molecule. Ins-SPC complex was formed by solid dispersion method at the molar ratio of 1:60. The complex was then characterized for partition coefficient. Ins-SPC complex was dispersed in to oil mixture of capmul MCM:Catex 8000 (1:1) and oil mixture was further mixed with cremophor RH 40 in a weight ratio of 6:4 to prepare a preconcentrate. Preconcentrate was further diluted with PBS (pH 7.4) to form SEN, which was characterized for droplet size, leakage of insulin from the oil phase to the aqueous phase. The cytotoxicity of the SEN was tested on the human nasal epithelial cells (HNEpC) in vitro. The transport of insulin across HNEpC monolayer by the SEN (50X dilution) was investigated. The in vivo absorption of insulin after intranasal (IN) delivery of the Ins-loaded SEN (3.6 IU/kg) along with the controls was evaluated in fasted normal rats for 240 min under anesthesia, and then histological examination was carried out to evaluate the adverse effect of the SEN on the nasal mucosa. Subcutaneous injection of insulin solution (1 IU/kg) was used as the positive control. 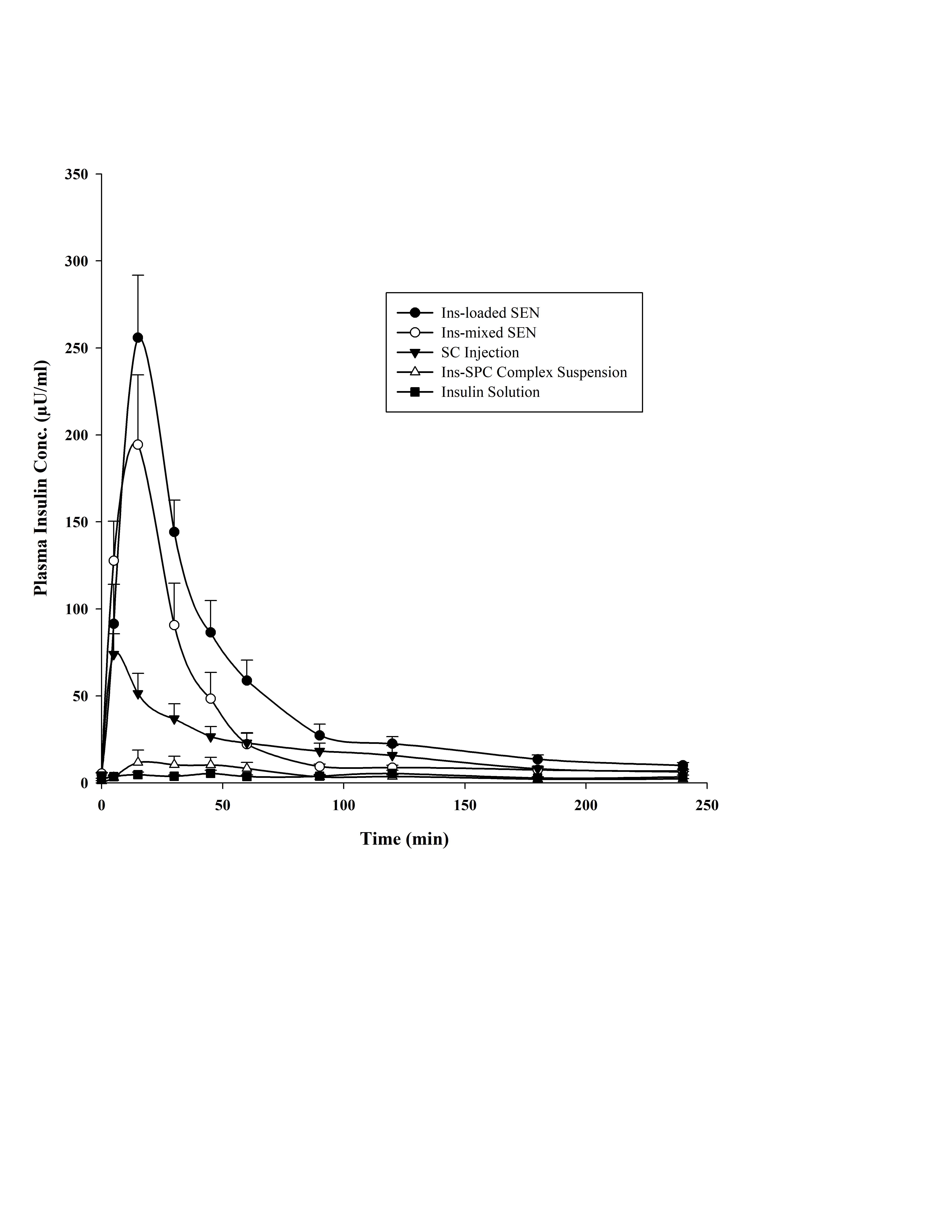 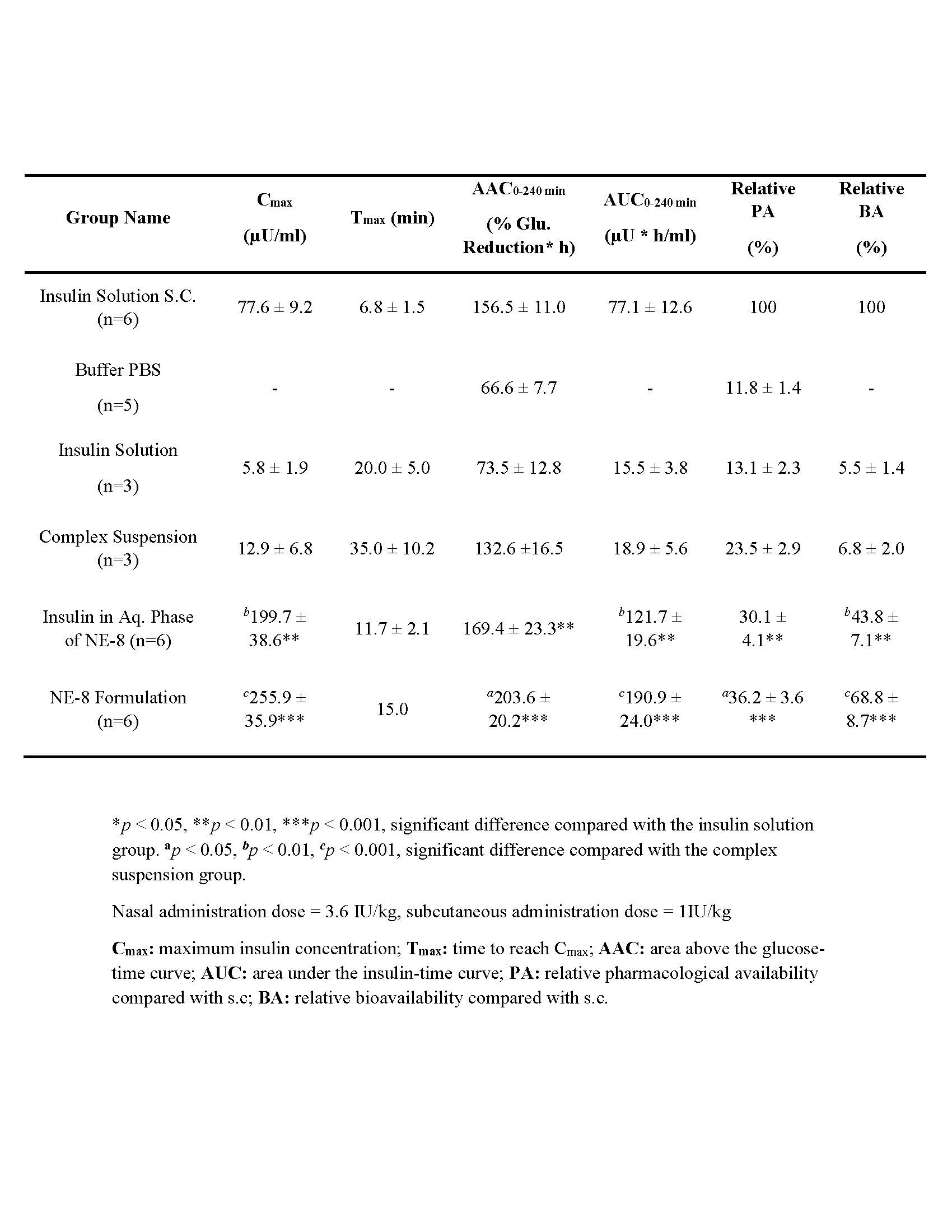 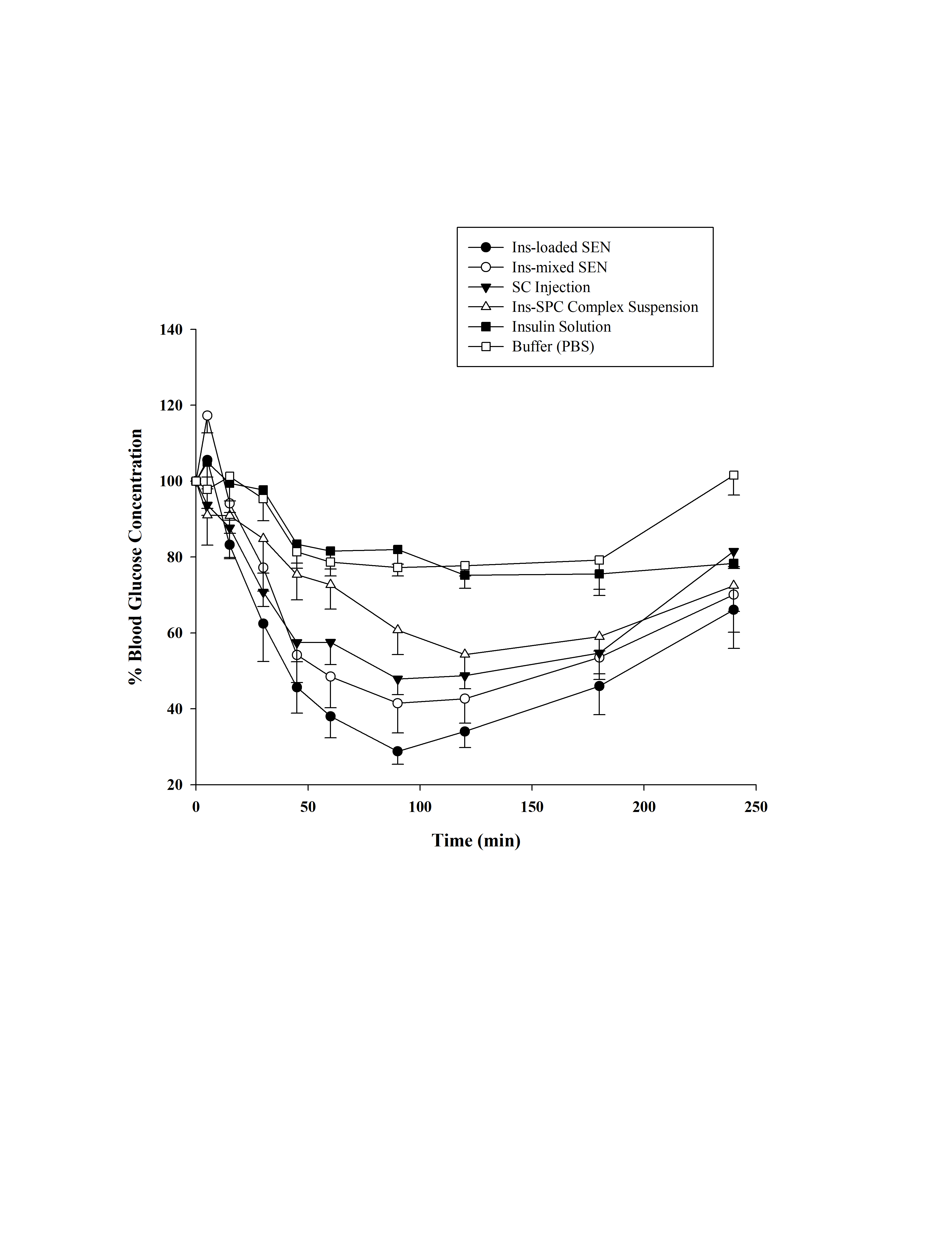