3D printing allows the fabrication of solid objects through a layer-by-layer approach based on a computer-aided model. 3D printing provides on-demand manufacturing of dosage forms [1,2] and allows fabrication of complex designs and geometries, incorporation of multiple APIs, and tailored release profile and thus could overcome the limitations of conventional manufacturing. Extrusion based 3D printing, particularly Fused Deposition Modelling (FDM) is the most widely used 3D printing technology in pharmaceutics. However, FDM has various limitations such as pre-fabrication of filaments by hot-melt extrusion (HME), which could affect the stability of thermo-labile drugs due to the increased likelihood of degradation due to thermal effect. Another major disadvantage is the limited number of drugs and excipients that can be utilized to obtain filaments of good mechanical and physical properties [3, 4]. Thus in order to avoid the fabrication of filaments by HME, direct powder extrusion 3D printing has been utilized. This technology involves direct extrusion of powder/pellets through the heated nozzle for the fabrication of desired dosage forms. Therefore, it greatly avoids the need for filament fabrication and allows extrusion of mixtures which could not be printed by conventional FDM due to their poor mechanical properties such as being too brittle or too flexible [5]. This study aims to explore the feasibility of direct powder extrusion 3D printing for fabricating sustained-release implants containing thermoplastic polymers such as poly (lactide-co-glycolide) (PLGA) and anti-inflammatory model drug, ketoprofen. Keywords: Direct powder extrusion 3D printing, sustained-release implants, PLGA, ketoprofen

Methods: For the preparation of 3D printed implants, both the drug and PLGA (50:50, molecular weight: 10-18k, acid terminated) are mixed using mortar and pestle to avoid agglomerated particles. The powder is then loaded into the thermoplastic cartridge and extruded through a nozzle of diameter 0.4 mm. The thermoplastic print head of the 3D printer (BioX) moves in three-dimensional manner to print the dosage forms in a layer-by-layer approach. All the printing parameters such as temperature, pressure, infill density, shape, dimensions, and print speed were optimized to obtain the implants of good mechanical strength. The uniformity of drug content for both intra-day and inter-day batches was analyzed using HPLC to determine the reproducibility of the printing process. The implants were further characterized for their weight variation and morphology. Finally, In vitro release of ketoprofen was studied by varying the infill density (10%, 20%, 30%, 40%) of the 3D printed implants.

Results: Low molecular weight PLGA (molecular weight: 10-18k) was found to be suitable for direct powder extrusion 3D printing without the need for including other pharmaceutical excipients. The uniformity of drug content in the implants was found to be between 95-105%, which ensures the reproducibility of the printing process. The release of ketoprofen from 3D printed implants was found to be dependent on the percentage infill density. The fastest relative drug release of approximately 90% was observed with 10% infill and lowest for 40% infill with 70% release in 21 days. Finally, the In vitro release data interpreted with various mathematical models showed the best fit with the zero-order model, as shown in Fig. 3. Further characterization by differential scanning calorimetry and Fourier-transform infrared spectroscopy need to be investigated along with optimization of implant formulation for further tailoring of the release profile. 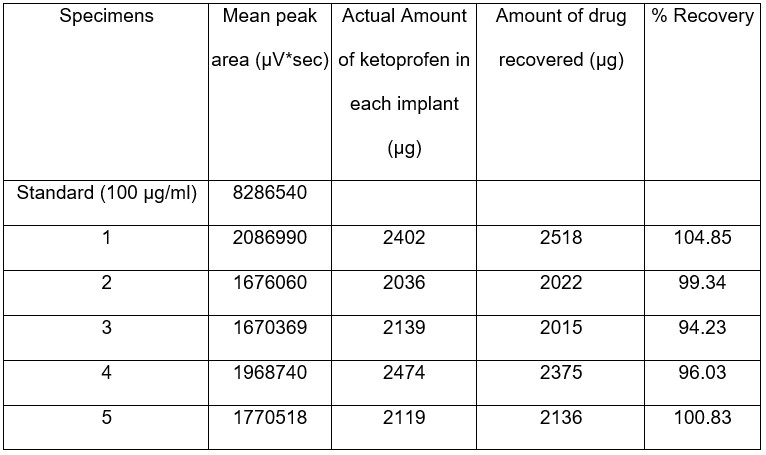 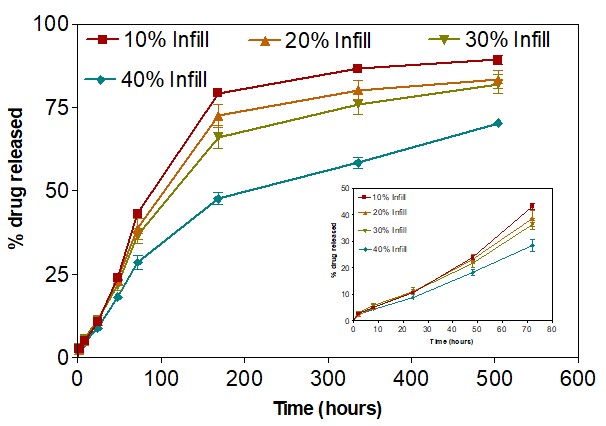