Purpose: In recent years, there has been a marked increase in discussions around surfactant mechanisms of biologic stabilization.  Many antibody-based drugs and drug candidates have limited shelf life or never reach the clinic due to thermal-mechanical instabilities in formulation, instabilities that can be mitigated by addition of a surfactant.  Improving the formulation stability of such pharmaceuticals will reduce costs and broaden markets for those drugs, while reducing side effects caused by byproducts of instability.  This work evaluates the fundamental properties and performance of a rationally-designed and chemically-defined series of surfactant excipients to better understand the mechanisms that drive surfactant stability.

Methods: N-alkyl phenylalanine Jeffamine M1000 amide molecules (xFM1000 where x=carbons in hydrophobe) were synthesized by sequential amidation of a saturated acyl chloride with phenylalanine followed by amidation of the resulting product with Jeffamine M1000.  Comparative surfactants were pharma grade and obtained from commercial sources.  NMR and liquid chromatography were used to confirm the identities of the reaction products and purity following xFM1000 synthesis.  IgG was acquired from MP Biomedical.  All formulations were prepared in dilute buffer or saline. Surface tension was measured on a Teclis Tracker.  DLS was performed on a Wyatt DynaPro II.

Results: Previous work focused on the fundamental characterization and performance of 14FM1000 (previously referred to as FM1000), where it was found that 14FM1000 stabilizes interfaces 1-2 orders of magnitude faster compared to three commonly used surfactants, Polysorbate 80, Polysorbate 20 and Poloxamer 188.  The dynamic surface tension of xFM1000 with x ranging from 8 to 18 (structures shown in Figure 1) found a marked shift in shape and speed of surface equilibration (Figure 2).  Shorter carbon lengths had drawn out, gradual equilibrations, while longer carbon lengths had precipitous drops in surface tension after an incubation time.  14FM1000 had the shortest incubation time before surface tension drop.  The shorter carbon lengths were representative of the dynamics of polysorbates.  We hypothesize that a more rapid equilibration and stabilization of an interface should lead to improved protein stabilization when subjected to interfacial stress. In a polyclonal IgG model of aggregation, the 14FM1000 differentiated itself from both longer and shorter carbon derivatives, consistent with our hypothesis.  The enhanced performance of the 14FM1000 coupled with its improved stability compared to standard technologies offers promise for its development and use for stabilizing biologic formulations in the liquid state.

Conclusion: A chemically-defined series of surfactants was developed to test how surfactant chemical structure impacts fundamental performance and stabilization of biologics.  14FM1000, the surfactant we have previously explored, was found to be at a sweet spot for properties and performance differentiation from similar surfactants.  The differentiated behavior of different derivatives within the series offers opportunities for better understanding mechanisms of aggregation for different biologics and directly mitigating biologic-specific instabilities. The data in total suggest that these novel surfactants can be promising new materials for improving the shelf-stability of antibody-derived biopharmaceuticals. 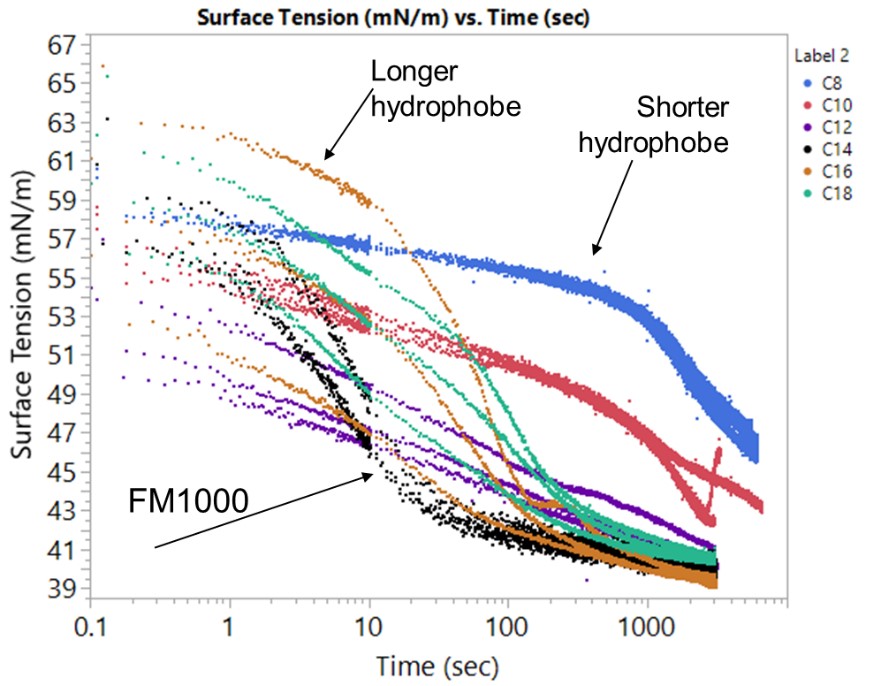