Purpose: Alzheimer’s disease (AD), the most common neurodegenerative dementia, is characterized by the abnormal amyloid-beta (Aß) accumulation in the brain, particularly Aß40 and 42. The BBB endothelium is a quintessential trafficking portal that delivers critical cargo, including glucose and growth factors, from plasma to brain, and also clears metabolic byproducts, such as Aß peptides, from brain to plasma. Glucose is the main energy source in the brain. The brain glucose is primarily transported from the plasma via the BBB. In line with our preliminary data, published studies have demonstrated impaired glucose uptake and metabolism in APP/PS1 transgenic mice, an AD model associated with Aß overexpression. These findings indicate that BBB dysfunction including impairment of Aβ protein clearance and glucose trafficking is associated with Alzheimer’s progression and may further lead to metabolic disturbance. Hence, we hypothesize that Aβ peptides cause cerebrovascular dysfunction and impair glucose transport at the BBB. The objective of this study is to elucidate the effect of Aß proteins on the kinetics of glucose transport at the BBB and investigate the molecular mechanisms underlying impaired glucose transport due to Aß exposure in Alzheimer’s brain.

Methods: To test our hypothesis, we investigated the role of Aß on glucose trafficking at the BBB by infusing Aβ40 via the left internal carotid artery. Then 18fluorodeoxyglucose (18FDG) was injected via the femoral vein and the brain uptake was determined by dynamic positron emission tomography/computed tomography (PET/CT) imaging. Patlak plots were used to estimate the rate of  glucose transport at the BBB endothelium. Then we assessed the permeability-surface area product (PS) of 18FDG in various brain regions of Aß40 pre-infused mice. Furthermore, western blot and immunochemistry studies were conducted  to test the impact of Aß exposure on GLUT1 expression in hCMEC/D3 monolayers.

Results: The Patlak plot of the data showed that the blood-to-brain influx rate of 18FDG was significantly reduced in Aβ40 pre-infused mice compared to the mice infused with DMSO control. The extent of 18FDG brain uptake was significantly decreased in Aß40 pre-infused mice. Moreover, the PS value of 18FDG was found to be much lower in the cortex, thalamus, brain stem, cerebellum, and olfactory bulb in Aß40 pre-infused mice. For in vitro studies conducted in hCMEC/D3 monolayers, we found out that Aß40 proteins disrupt the GLUT1 expression by inhibiting PI3K/AKT pathway and the underlying molecular mechanisms will be presented in the poster. 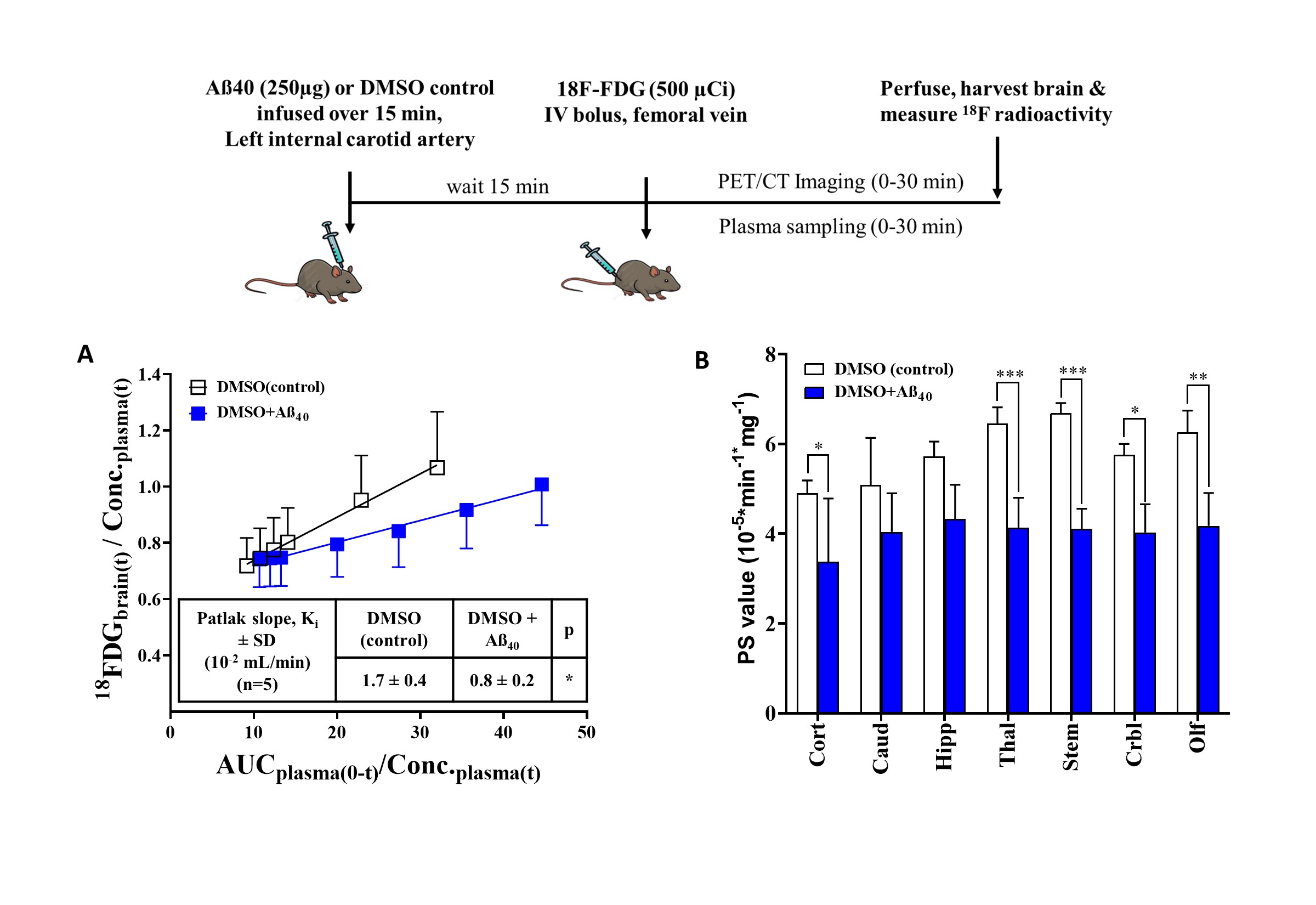