Purpose: Blending process of a low drug load formulation is a critical unit operation in the pharmaceutical development and manufacturing.  Traditional blend uniformity (BU) testing involves a thief sampling approach that is intrinsically invasive, labor-intensive, and time-consuming.  BU failures can sometimes be caused by the disturbance of blend due to blend sampling technique, instrument used & Operator to Operator variability and thus results may not represent the batch. More importantly, with an increasing number of potent compounds with low Occupational Exposure Levels (OEL) in the pharmaceutical portfolios for the treatment of cancer, the thief sampling approach presents a safety concern to manufacturing Operators of the exposure during the sampling process while the blender containing the active is open.  It has become unprecedently amenable and pressing to develop an inline Process Analytical Technology (PAT) tool for BU monitoring of low drug load compounds. Compared with the popularly used PAT tools such as NIR and Raman, Light Induced Fluorescence (LIF) has been well-known for its sensitivity to measurement of the compounds with low drug load less than 1%.  However, due to lack of well-established commercial LIF process analyzers, there has been a handful of LIF-related PAT studies or applications that have been reported. The purpose of this work is to develop a safer and novel Process Analytical Technology (PAT) tool to fill the technology gap for in-line BU monitoring of low-drug load formulation.

Methods: The customized LIF BU analyzer is equipped with a LED stabilized by an integrated photodiode to regulate current through and maintain constant optical output despite LED aging and temperature fluctuation. The single wavelength LED offered high throughput to maximize sensitivity and large detection spot size to decrease measurement variability. The formulation of this work involved a conventional direct dry blend process followed by encapsulation (Figure 1). It consisted of six ingredients with the API concentration as low as 0.25% in weight. For inline blend monitoring, the measurement head of the LIF analyzer was securely mounted using a tri-clamp connector to the sapphire window weld-mounted to the IBC (Figure 2). An embedded hardware component triggered the data acquisition whenever the blender was inverted, resulting in an LIF output per blender revolution. Instrument control and data acquisition was achieved via a remote-control computer. A qualitative calibration-free approach, trending moving block standard deviation (% MBRSD) of the LIF API signal over progression of blend process, was used for evaluation of BU. According to the methodology, if the % MBRSD meets the criterion of no greater than 3.0% for the last 60 blending revolutions, the blend is deemed uniform. Mathematically simple, the qualitative approach is most advantageous over the quantitative approach in two folds. Firstly, this approach is well aligned with the recent BU assessment guidance and accepted by regulatory agencies. Secondly, this PAT approach is robust to process and procedural variabilities, thus entailing much less burden than a quantitative approach when it comes to method maintenance during commercial phase of implementation.

Results: The LIF BU method was validated on specificity, sensitivity and robustness. The specificity was demonstrated by the minimal fluorescence emission from the placebo blend and strong API fluorescent emission from blends. The sensitivity of the method was characterized by a quantitative calibration approach involving use of a series of reference blends with the known API concentrations. The estimate accuracy of the method is less than 2.0%  relative to the 0.25% drug load. The sources of variability evaluated for robustness included API lot/vendor, batch size, dosage strengths, measurement day/instrument/personnel. Consistent analytical performance was observed for the LIF data generated on 19 commercial-scale batches. The LIF BU trending profiles showed %MBRSD values less than 3.0% over the last 60 revolutions for all the batches (Figure 3). The LIF BU results were verified by HPLC analysis of the BU thief samples taken for the DoE batches representative of the worst-case scenario.

Conclusion: A robust PAT tool based on LIF spectroscopy has been developed for blend monitoring of a low drug-load formulation. The LIF analyzer was successfully validated on selectivity, sensitivity and robustness, offering an opportunity to replace the variable manual blend sampling techniques conventionally employed for in-process BU testing. 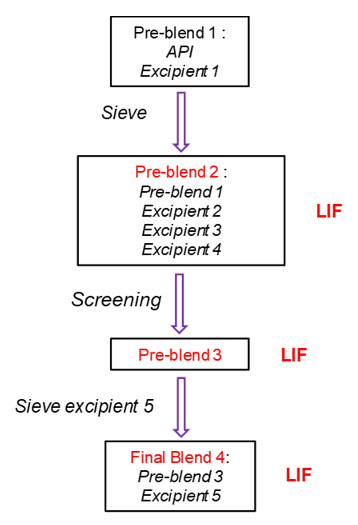 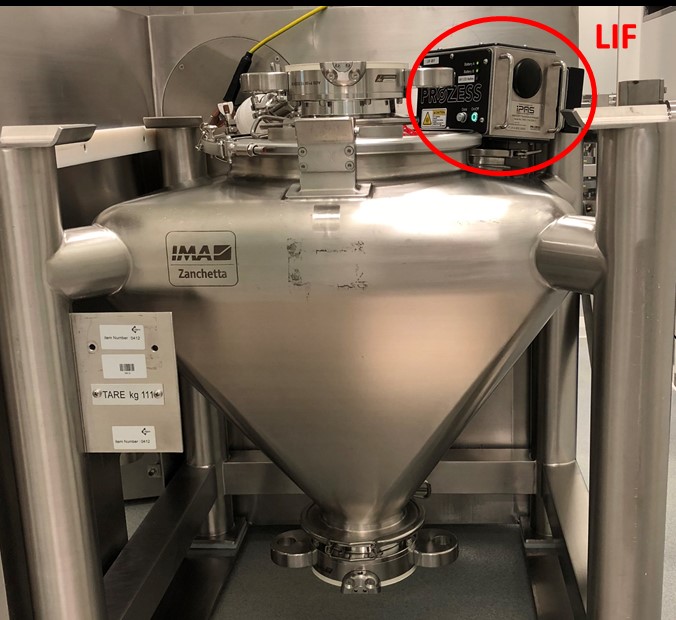