Purpose: Conventionally, film-coating of active pharmaceutical ingredients (APIs) and functional excipients on inert cores has been carried out using a spray system by atomizing coating dispersions or solutions of varying % solids. Such processes are often time-consuming as high amounts of applied solvents (aqueous or organic based) need to be sufficiently evaporated to prevent any agglomeration and remove residual solvents to an acceptable limit. In such cases, dry powder-layering or coating shows an innovative approach to film-coating using a rotor processor. In this process, micronized APIs, functional excipients, or powder blends are coated onto inert cores in their dry form with the help of very low amounts of binder solutions. By applying 100% powder blend instead of their dispersions, the processing time becomes significantly less and therefore, increases overall productivity. Furthermore, the use of organic solvents is significantly reduced along with their expensive recovery. During the dry powder-layering process, it is very critical to maintain the ratio of binder solution to powder feed rate. In many instances, there is only a narrow window of opportunity available to start the powder feeder when the inert cores become sufficiently wet. Therefore, it is very critical to continuously measure the solvent or moisture concentration throughout the process, especially during the first hour of starting the spray and powder. Previously, the use of an NIR (near infrared) filter photometer in a rotor processor during granulation was validated to continuously measure moisture of widely used excipients (R2=0.92-0.99)1. The main purpose of this investigation was to demonstrate the use of an NIR filter photometer as an in-line process analytical tool to monitor and characterize absorbances for various events (binder addition, powder addition, equilibrium state, etc.) throughout the process.

Results: Figure 1A shows the NIR absorbances recorded during the entire powder-layering process. Figures 2A, 2B, 2C, and 2D show magnified events from Figure 1. As shown in Figure 2A, the absorbance values decreased initially and then steadily increased after starting spraying the binder solution. The absorbance values started decreasing as soon as soon powder was added. The absorbance values decreased gradually with continuous powder addition until an equilibrium was reached. After reaching the equilibrium, the NIR probe was removed for inspection and the event was observed in Figure 2B. Figure 2C depicts the same patterns of change in absorbances as Figure 2A when the addition of spray and powder occurred. Figure 2D shows the process in equilibrium where the ratio of binder addition rate and powder feed rate resulted in a successful powder-layering process. Figure 2D also shows the similar event as Figure 2B where we took out the NIR probe for inspection. The process resulted in more than 96% yield with less than 1% agglomerates ( >1.4 mm). The final product showed very narrow size distribution (X10: 836 µ; X50: 1050 µ; X90: 1252 µ) and sphericity of 0.78 at X50. The powder-layering process was highly reproducible with comparable absorbance patterns for specific events. The moisture content values obtained from an LOD machine did not correlate directly to the NIR absorbances. This apparent non-correlation is because as the powder-layering process progresses, the absorbance values reflect the powder layered surface’s moisture, whereas the LOD measurement shows the total moisture content including the inner core. However, the change in LOD values can be observed in the NIR absorbance values.

Conclusion: In the present study, the use of an NIR filter photometer was successfully demonstrated to explain the changes (binder addition, powder addition, equilibrium condition, etc.) occurring during the API powder-layering process. It can be concluded from this investigation that an NIR filter photometer can serve as a versatile process analytical tool to monitor process changes with high sensitivity in real time. 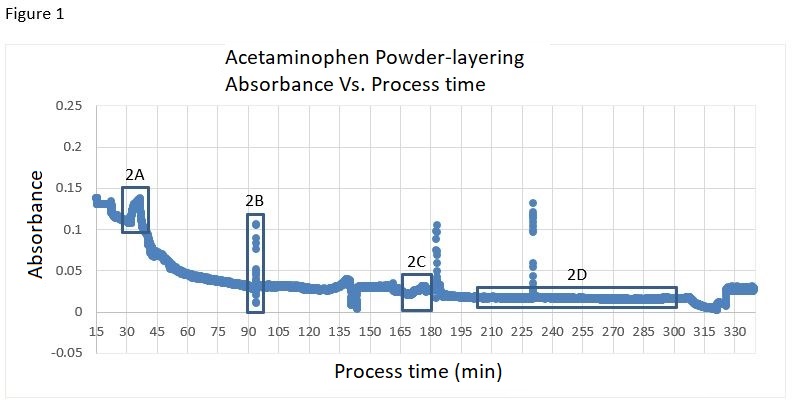 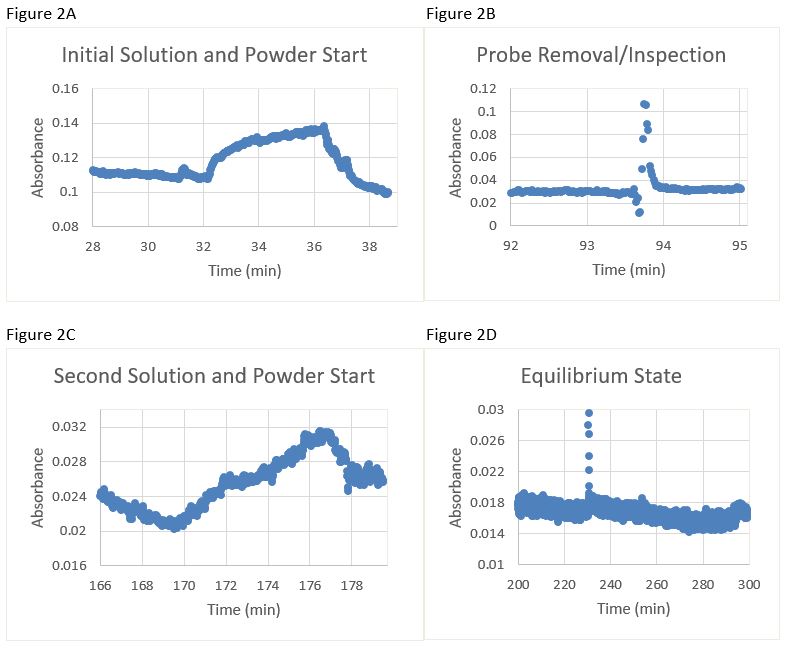