Purpose: The purpose of this study is to develop a novel therapeutic for chemoresistant prostate cancer (PCa) using existing antimuscarinic compounds currently used in the clinic to treat other indications.

Results: PCa cells that have developed resistance to the chemotherapy agent docetaxel (DTX) show a marked distinction in their transcriptome compared to chemonaïve PCa cells measured by RNA-Seq analysis. One signaling pathway that is upregulated in DTX-resistant PCa cells is the neurotransmitter acetylcholine (ACh) signaling pathway. We show that these cells have increased expression of the muscarinic acetylcholine receptor 1 (CHRM1) which is a major ACh receptor. Knockdown of CHRM1 with siRNA increases the sensitivity of PCa cells to the cytotoxic effects of DTX shown by decreased survival of CHRM1 knockdown cells at lower doses of DTX compared to cells transfected with a siControl. Conversely, overexpression of CHRM1 has a protective effect by increasing cell survival in CHRM1 overexpressing cells in response to DTX challenge. Next, we determined the ability of the CHRM1 antagonist dicyclomine (Dic), which is currently used in the clinic to treat irritable bowel syndrome, to sensitize PCa cells to DTX-induce apoptosis. Dic treatment alone did not induce apoptosis but increased the ability of DTX to induce apoptosis in chemonaïve and chemoresistant PCa cells shown by a higher percentage of cells with DNA damage observed by TUNEL assay. Conversely, the ACh mimetic carbachol (CCh) had a protective effect from DTX-induced apoptosis in cells overexpressing CHRM1 shown by decreased levels of the pro-apoptotic proteins cleaved PARP1 and cleaved caspase 3. Our novel combination therapy of Dic + DTX also showed significant efficacy in an in vivo model, where DTX-resistant PCa cells were injected in the flank of SHO mice and treated with either vehicle, Dic alone, DTX alone, or Dic + DTX. The Dic + DTX treated mice developed tumors that grew much slower than the other treatment groups and had smaller tumors at the experimental endpoint. Mechanistically, CHRM1 signaling may protect PCa cells from the cytotoxic effects of DTX through the MAPK pathway, specifically the Erk/CREB branch of this pathway. RNA-seq analysis of DTX-resistant PCa cells show a large enrichment in genes involved in the MAPK signaling pathway. Stimulation of CHRM1 overexpressing cells with CCh resulted in activation of Erk1/2 and CREB as shown by increased levels of the active phosphorylated forms measured by Western blot. This activation did not occur in the parental cell line suggesting that this pathway is only activated by ACh once cells begin to overexpress CHRM1.

Conclusion: While chemotherapy remains an effective treatment for late stage PCa, every patient inevitably develops resistance to these drugs. We show that CHRM1 signaling plays a large role in the development of DTX-resistance which may be mediated by the Erk/CREB pathway. Furthermore, clinically available CHRM1 antagonists, such as the irritable bowel syndrome drug Dic, show strong promise for preventing the development of chemoresistance and resensitizing tumors that have already become resistant. 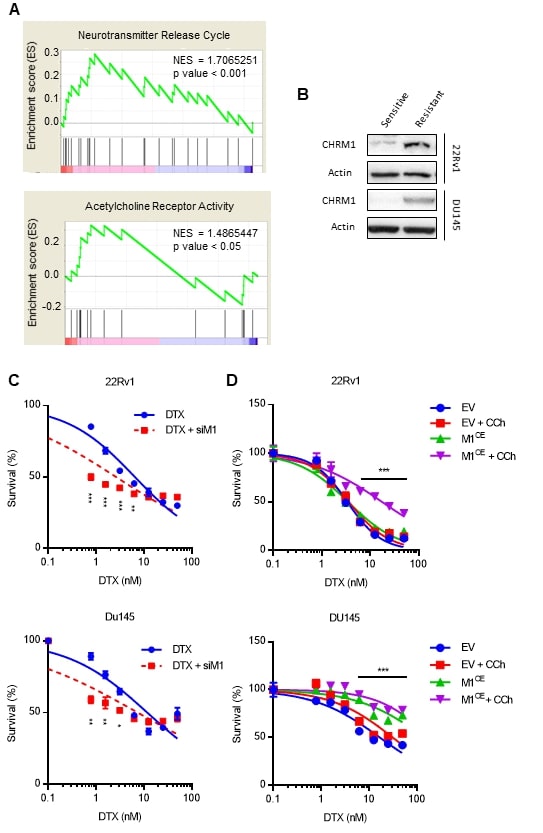 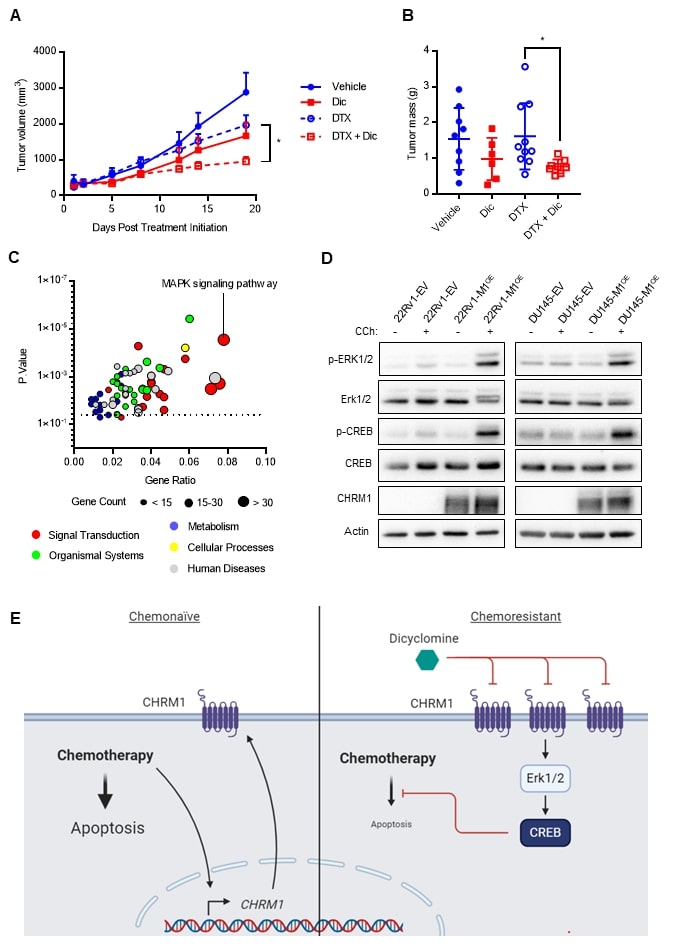