Purpose: An estimated 1.13 billion people worldwide have hypertension. Complications associated with uncontrolled hypertension are the major cause of premature death worldwide1. Polypharmacy is a major challenge with over than 65% of patients failing to adhere to their prescribed drug regimens. Fixed-dose combinations (FDC) offer an alternative approach to improve patient compliance. In this study, a FDC composed of Hydrochlorothiazide (HCTZ) and Ramipril (RMP) was manufactured using hot melt extrusion (HME). To date, the vast majority of the work reported in the literature had focused on quantifying a single drug during continuous processing. In previous work, we proved the feasibility of developing and validating a reliable Raman based process analytical tool (PAT) for the inline quantification of RMP during HME2,3. The aim of this study was to develop and validate non-destructive, predictive inline PAT tools allowing the simultaneous quantification of HCTZ and RMP during HME processing.

Methods: A co-rotating, fully intermeshing HME (Microlab, Rondol Technology Ltd, France) was used for the manufacture of FDCs. A high temperature and pressure immersion Raman Kaiser Probe (RAMAN RXN™ Probe) was installed into the extruder die. The extrudates were non-destructively analysed during processing using inline Raman spectroscopy at a laser power of 400 mW and wavelength of 785 nm. Collected spectra were then processed using SIMCA software (version 15, Umetrics, Sweden). Principal Component Analysis (PCA) was performed to identify the principle components that capture the variation in spectra collected for each drug during HME. A calibration set composed of HCTZ and RMP at concentration ranges of 6.5 to 40 and 2.5 -15 (% w/w), respectively, was manufactured to cover a wide range of the therapeutic relevant doses available in commercial products. Partial least squares (PLS) regression was performed to establish a predictive calibration model for each drug. External validation against the reference HPLC method was considered to evaluate the predictability of the developed inline Raman based PLS calibration models.

Results: Different Raman regions showing no overlapping of signals of drug or excipients were investigated to identify a distinctive region for each drug. PCA was performed to optimise wavenumber regions that can capture the variation in the spectra associated with drug content. PCA score scatterplots (Figure 1) showed that the main scores of the spectra were oriented along PC1 with the highest PC1 scores corresponding to the extrudates containing high drug content (32% and 40% w/w of HCTZ; 12.5% and 15% w/w of RMP) while lower values were associated with lower drugs concentrations. The optimum wavenumber regions were observed at 200-400 and 630-730 cm-1 for HCTZ, and 980-1100 cm-1 for RMP. The intensity of signals selected for each drug were directly proportional to the concentration of the corresponding drug in the calibration set. Furthermore, loading plots obtained for PC1 of each PCA model confirmed the suitability of the wavenumber regions selected as they were able to capture 98.6% and 92% of the spectral variation in the regions selected for HCTZ and RMP, respectively. A calibration model for each drug was established using PLS regression. PLS models developed showed excellent linearity (R2= 0.98 and 0.974) and accuracy (RMSEcv= 1.79 and 0.65 %) for HCTZ and RMP, respectively. Additionally, the models showed good predictability for drug content in the validation set. RMSEP values were reported as 1.52 and 1.01 % for HCTZ and RMP, respectively.

Conclusion: Results obtained from this study indicate that a careful selection of the spectral range that can identify each drug unequivocally in the FDC is of paramount importance for the development of PAT predictive models. Reliable Raman based PLS models for the inline quantification of HCTZ and RMP were developed and validation requirements were met. The output of this study allows in-process quality control of multiple drugs in FDC during HME. Furthermore, it allows the implementation of PAT tools as routine methods of analysis within the laboratory. 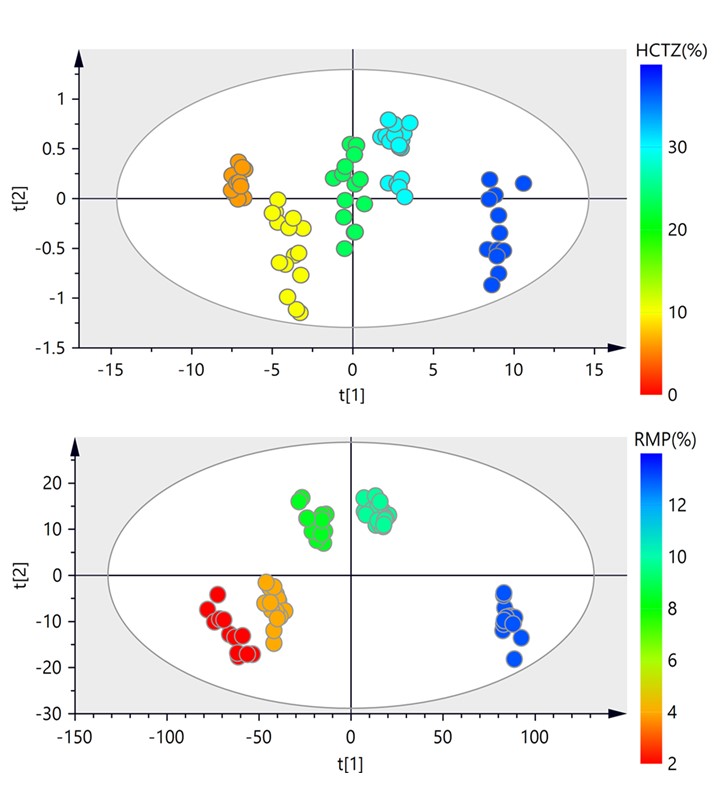