Purpose: Over five decades, tretinoin has been used in the treatment of different indications, including acne vulgaris, however, topical tretinoin may cause skin irritation in some patients and is susceptible to photo degradation. Innovation led to the formulation of tretinoin in porous microparticles (microspheres) that offered controlled drug release, decreased irritation, and improved stability. Developing a generic product for tretinoin may involve utilizing the same commercially-available microspheres (i.e., Microsponge®) utilized in the reference product, or manufacturing the microspheres in-house. In both cases, the microspheres in the test product may exhibit different physicochemical characteristics than the reference product. These variations in physicochemical characteristics may result in different bioavailability and may impact the bioequivalence of the test product compared to the reference product. This study compared the physiochemical properties between the in-house prepared tretinoin microspheres with the microspheres that were separated from Retin-A® Micro (tretinoin) gel, 0.1%, and evaluated the influence of physiochemical differences among microspheres on tretinoin release via in vitro release testing (IVRT).

Methods: Tretinoin-loaded microspheres were prepared by mixing tretinoin and Microsponges® 5640 in acetone followed by evaporating the solvent to achieve tretinoin concentrations at 0.5%, 1% and 2% w/w, respectively in the microspheres. The drug-loaded microspheres were characterized for particle size distribution and surface morphology by comparing them to the blank Microsponges® 5640, and the microspheres that were in (and separated) from Retin-A® Micro (tretinoin) gel, 0.1%. The particle size distribution was assessed using laser diffraction analysis. Surface morphology of microspheres was visualized by optical and scanning electron microscopy (SEM). Drug distribution in the internal space of the microparticles were evaluated by Raman mapping coupled with chemometric analysis. Drug release (IVRT) from the in-house drug-loaded microspheres 0.5%, 1% and 2% w/w, the separated microspheres, and Retin-A® Micro (tretinoin) gel, 0.1% was studied using Vison® Microette™ Hanson vertical diffusion cells for 12 hours. Preliminary studies were conducted to evaluate tretinoin permeation from the microparticles through human cadaver skin (Science Care Co.; Phoenix, AZ, USA) using an in vitro permeation test (IVPT) method.

Conclusion: In the current study, particle size distribution and surface morphology assessments were utilized to characterize in-house prepared tretinoin microspheres and microspheres that were separated from Retin-A® Micro (tretinoin) gel, both of which were found to be spherical, free-from-aggregates with apparent differences in particle size. The IVRT method we developed was able to discriminate differences in tretinoin release rates (and amounts of tretinoin released) based upon differences in the particle size and drug loading of the microspheres, however, the gel matrix surrounding the microspheres in Retin-A® Micro gel had no measurable effect in controlling the release of tretinoin. IVPT studies with this tretinoin-based product appeared to demonstrate problems with permeation or detection that need further study. 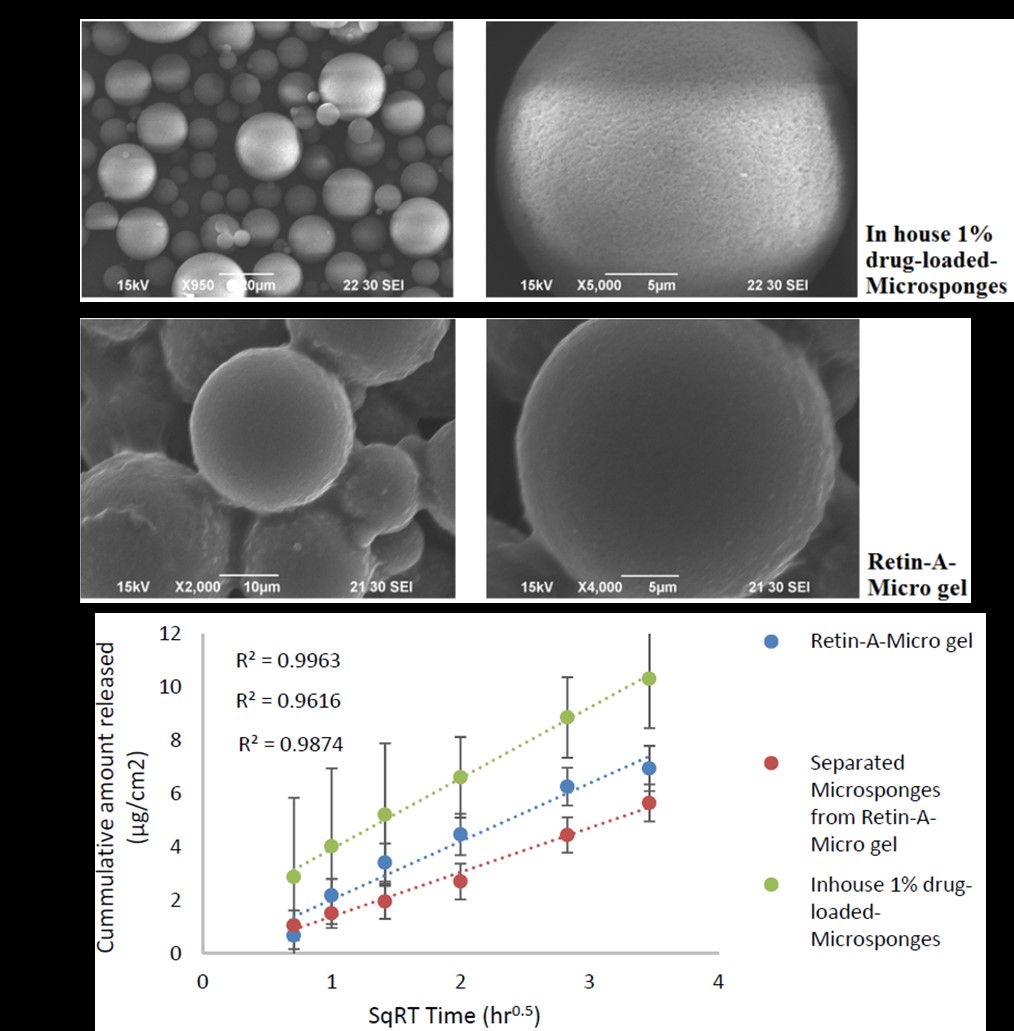