Purpose: Polymeric medical implants have emerged as promising drug-eluting devices in recent years. With an ability to tailor the drug release at a predetermined rate, these implants are flexible, easy to fabricate, and biocompatible upon implantation. Such implants improvise the treatment regimen by decreasing the frequency of drug dosing for better patient compliance. Thermoplastic materials are always of central importance for extrusion-based technologies like Fused Deposition Modeling (FDM). FDM requires the pre-fabrication of filaments by Hot melt extrusion (HME) prior to printing. This multi-step process is time consuming and also results in repeated thermal stress on the active pharmaceutical ingredient (API) and limited excipients, thus increase the likelihood of degradation (1). Removing the step of filament fabrication will substantially reduce the production cost, accelerate formulation development and shifts the attention to single 3D-Printing process and design optimization. Recently published research works involving single-step extrusion for plastics (2), printlets (3), and tablets (4) have shown clear advantages over FDM with regards to productivity, time efficiency and excipients selection.

Thermoplastic single-step extrusion utilizes temperature for melting the feed and pneumatic pressure to extrude filament from the nozzle based on CAD model designs sliced to the desired shape on printing platform. A biodegradable polymer, polycaprolactone (PCL), is a suitable candidate due to its thermal stability at higher extrusion temperature. PCL implants also have longer resorption time once installed inside the body, resulting in extended-release of actives. In this work, PCL implants were produced by thermoplastic extrusion technique. Thermoplastic extrusion of polymers as a direct step was investigated as a possible additive manufacturing technique to fabricate dynamic polymeric implants. Ketoprofen, an anti-inflammatory agent, was utilized as a model drug. Keywords: Thermoplastic extrusion, polymeric implants, 3D-Printing, Biodegradable polymers

Methods: 3D-printed polymeric implants were fabricated by the thermoplastic extrusion approach using BIOX printer. The printer provides versatility to mount thermoplastic printhead and utilizes temperature and pressure regulated extrusion of polymeric feed to design implants using stl file on the preheated platform. PCL (molecular weight, ~80 k) was mixed uniformly with ketoprofen in different ratios and filled in the stainless steel cartridges prior to extrusion. The temperature and pressure is optimized for printing based on the melting temperature of the feed composition. The surface morphology and roughness was characterized by Keyence VHX 6000 microscope. Multiple batches of implants were printed with variation in printing parameters like printing speed, the extent of infill, printing pattern, drug-polymer ratios, and nozzle size (Figure. 1). The in vitro release profile of ketoprofen from implants was investigated in PBS: ethanol (95:5) (pH 7.4) as release media for 45 days. A fixed amount of aliquots were removed and replaced at predetermined time points and quantified by UV-spectrophotometer. The residual content of the final implant and the extent of polymer erosion was also evaluated. We aim to investigate the stability of the drug molecule in implants using Differential Scanning Calorimetry (DSC) and alteration in the mechanical strength of polymeric implants on the basis of different processing parameters.

Results: The implants showed a sustained release profile of ketoprofen with almost 50% of the drug released by 7 weeks. The drug release pattern was observed to be proportional to the rate of infill as 25% drug infill ratio showed maximum release in comparison to higher infill ratio (Figure. 2). The amount of blend extruded from the nozzle as well as the amount of drug-loaded on the implants were found to be not exactly proportional, but relatively increasing with the increasing rate of infill (Figure. 3). The batch to batch reproducibility was evident, and uniformity in drug content was quantified. Some limitations observed were occasional weight variation between batches of same processing parameters and longer melt residence time.

Conclusion: PCL-ketoprofen implants were fabricated by thermoplastic extrusion and characterized for its possible drug delivery properties. The single-step alternative to FDM was investigated for batch-to-batch variation and feasibility of the production of polymeric implants. The drug loading of the fabricated implants has been found consistent, and the technology appears to be viable for on-site manufacture of personalized implants. We are still in process for mechanical characterization and stability evaluation. We aim to elucidate the possible practical utilization of thermoplastic extrusion for polymeric implant manufacturing in terms of productivity, time efficiency, and excipients selection. 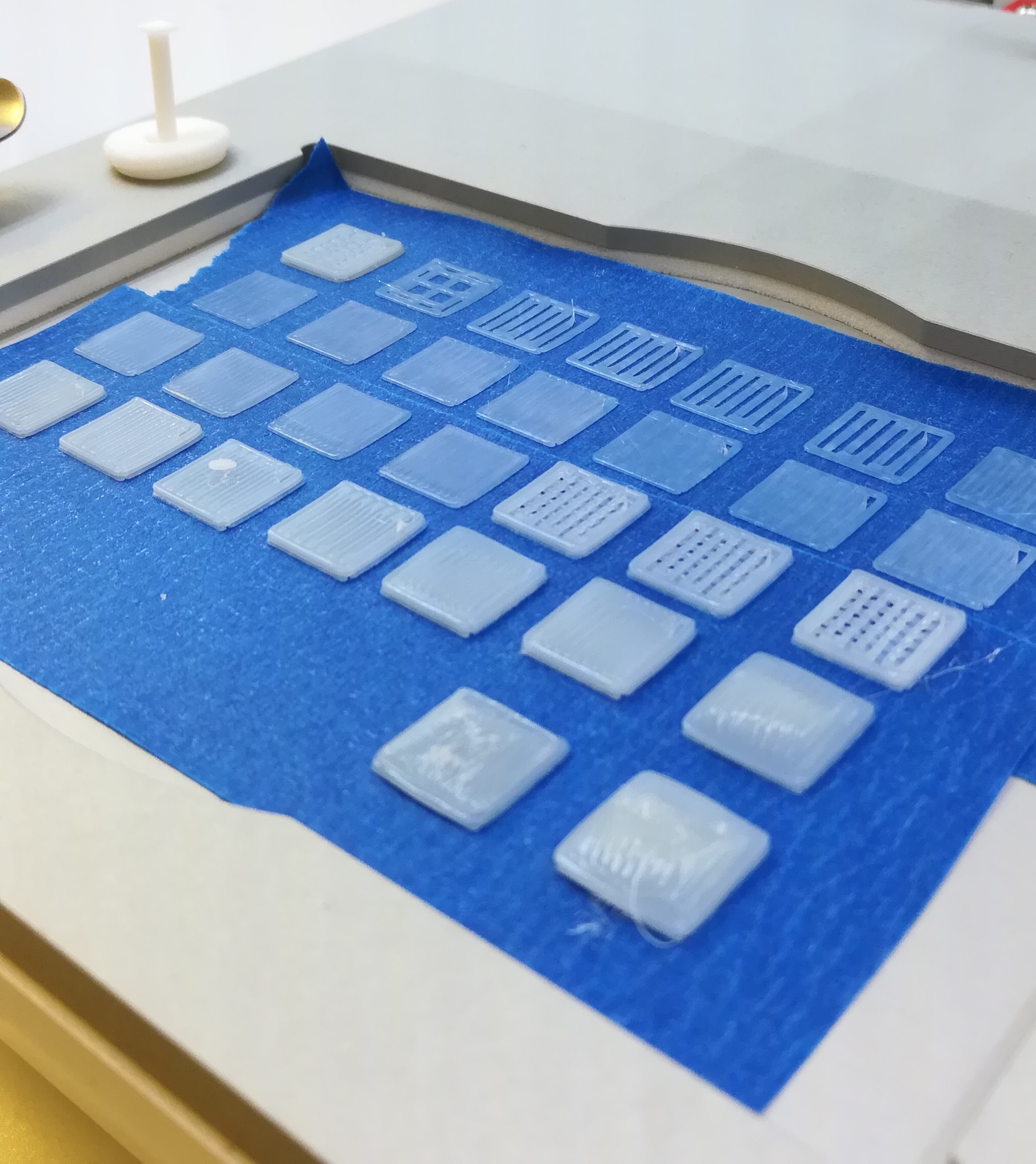 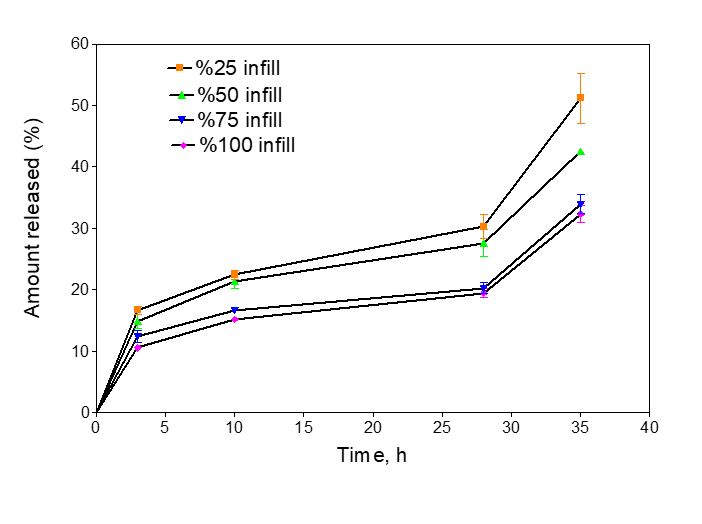 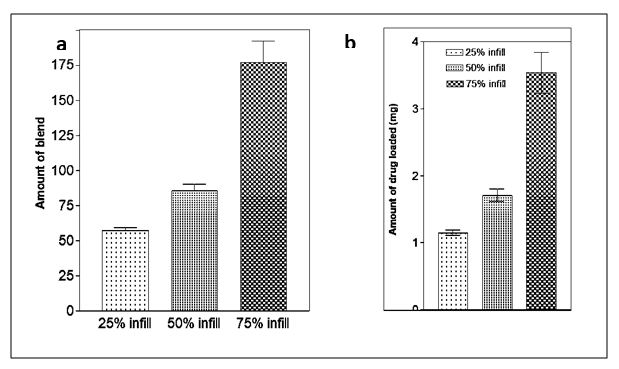