Purpose: Oral mucositis ulcerations cause intense pain, nutritional compromise, high cost of care and sometimes requires reduction in the chemotherapy or radiation dose that a cancer patient receives [1]. Although anesthetic mouth-rinse remains the current first-line therapy for oral mucositis pain control at most US hospitals, it requires high rinse volume (5-30 mL) over the whole oral cavity resulting in side effects of numbness throughout the healthy oral mucosa. In situ forming gels have been gaining growing interest for precisely localized drug delivery due to their sol-gel transition behavior [2]. A low administration volume is necessary to reduce the contact of the gel with the healthy oral mucosa, thus delivering drug substances precisely at the mucositis lesions. However, this is challenging for in situ forming gels loaded with hydrophobic drug substances due to their low solubility. The objective of this study is to develop an in situ forming gel with enhanced loading of the hydrophobic drug, Bupivacaine γ-linoleate (Bup-γL), for oral mucositis pain control.

Methods: Two co-solvents (PEG400 and ethanol) and eight solubilizers (Tween 80, sodium lauryl sulfate, Cremophor® RH 40, Cremophor® EL, Kolliphor® HS 15, Soluplus®, PEG3350 and PEG8000) were selected to screen their solubilizing capability to Bup-γL. The solubility of Bup-γL was measured via the shake-flask method. Carbopol was swollen in water under stirring for 2 h to form a homogenous liquid at room temperature, followed by the addition of Pluronic F127 (F127) and Pluronic F68 (F68) at 4°C to form blank in situ forming gels. The drug loaded formulations were prepared by adding Bup-γL/DMSO solution (~700 mg/mL, 40 °C) dropwise to the blank gels under vigorous stirring.  Formulations with enhanced drug loading were prepared by adding sodium lauryl sulfate (SLS) powder to the blank gels immediately after the addition of the  Bup-γL/DMSO solution. The formulations were characterized for their gelation temperature (tube-inversion method [2]), rheological behavior (ARES-G2 Rheometer) and solid state (Olympus BX51 polarized light microscopy). In vitro drug release testing was performed in pH 6.8 artificial saliva using a USP apparatus 2 with enhancer cells at 37°C.

Results: Among all of the selected co-solvents and solubilizer solutions (Figure 1), SLS showed the most significant solubilizing capability (8.83 ± 0.94 mg/mL), and therefore was used to enhance the drug loading in the formulation. The in situ forming gels were free-flowing liquids at room temperature and formed a solid gel at the gelation temperature. Increase in the F127 concentration and decrease in the F68 concentration of the formulations reduced the gelation temperature (Table 1). By varying the concentrations of F127 and F68, desired gelation temperatures were obtained for both the drug loaded formulation (34.2 ± 0.8°C) and the blank formulation (35.6 ± 2.2°C). The addition of SLS significantly (p< 0.01) improved the drug loading of Bup-γL in the in situ forming gels. At a dose of 25 mg [3], the required volume of the saturated Bup-γL water solution, the Bup-γL formulation without SLS (CP167) and the Bup-γL formulation with SLS (SCP167) were 9.1 mL, 3.9 mL and 2.4 mL, respectively. The rheological properties (Figure 2A) of formulation SCP167 demonstrated the sol-gel transition behavior of the formulation. The polarized light microscopy results showed that the Bup-γL was in the crystalline solid state and that there was no crystalline precipitation in the formulation (Figure 2B). The in vitro drug release showed that maximum drug release was achieved at approximately 6 h (Figure 2C).

Conclusion: An in situ forming gel with high loading of hydrophobic Bup-γL was successfully prepared. The free-flowing property of the formulations allows ease of application (such as in spray or drop form) at room temperature. The solid gel property of the formulation at body temperature and the low administration volume allows precise localized delivery, reducing the side effects of numbness towards the healthy oral mucosa, which is difficult to achieve with the current mouth-rinse. Furthermore, the gelation temperature of the formulation can be easily adjusted by altering the polymer type and concentration, which renders this technology to be readily extended to other applications. 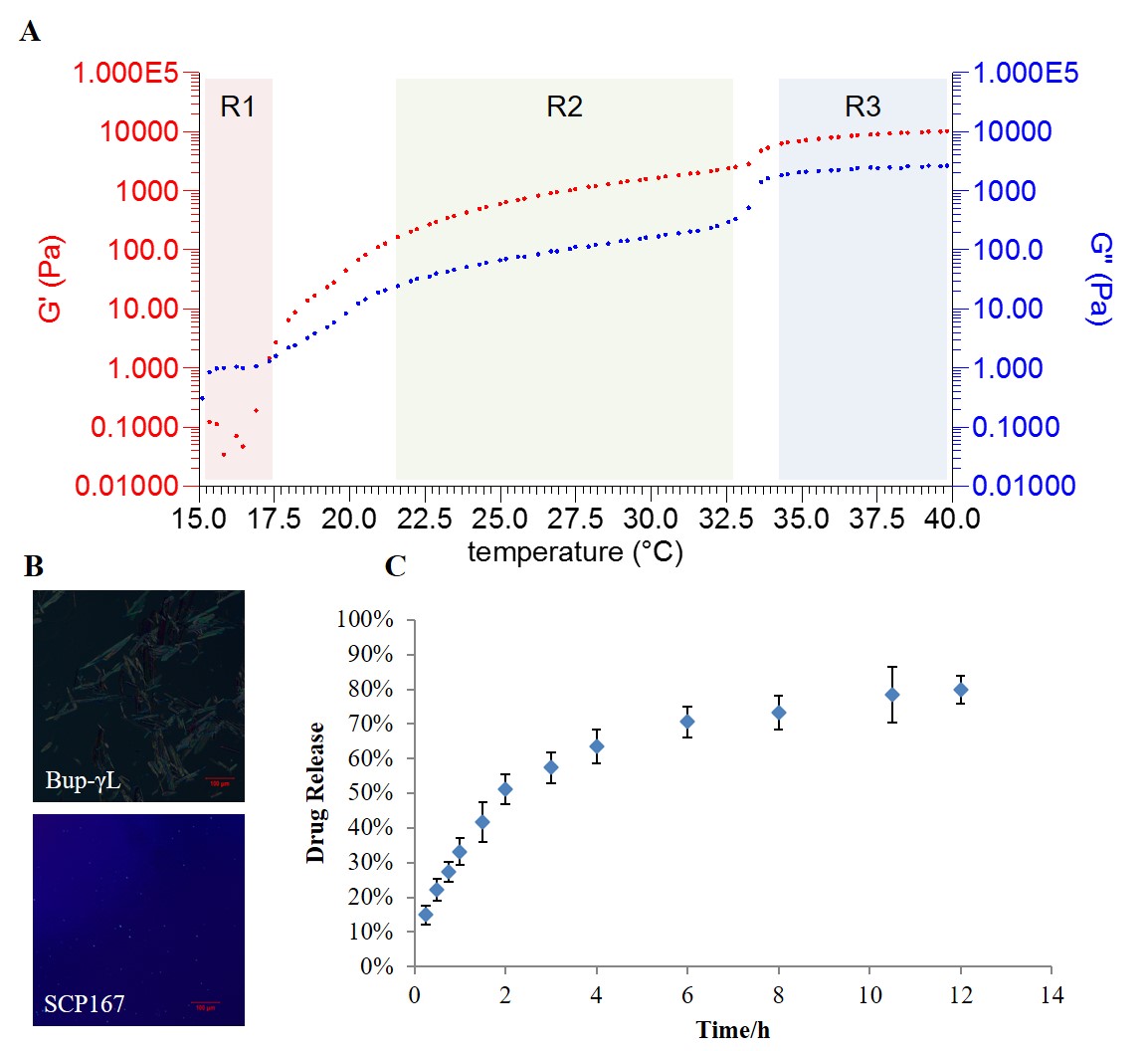