Purpose: Repository corticotropin injection (RCI; Acthar® Gel) is a naturally sourced complex mixture of adrenocorticotropic hormone analogs and other pituitary peptides.1 A major component of the formulated complex mixture is N-25 deamidated porcine adrenocorticotropic hormone 1-39 (ACTH1-39). RCI is approved by the US Food and Drug Administration for the treatment of several autoimmune and inflammatory diseases, with demonstrated efficacy in patients who have not responded to corticosteroids for the treatment of these conditions.2,3 Synthetic ACTH1-24 depot is a suspension that contains the first 24 amino acids of the full-length natural ACTH1-39 and is complexed with zinc to prolong its release. Both RCI and synthetic ACTH1-24 depot bind to and activate melanocortin receptors (MCRs).4 Previous clinical and nonclinical studies suggest that synthetic ACTH1-24 depot is a stronger agonist of MC2R in the adrenal cortex, which leads to a greater level of endogenous corticosteroid production versus RCI.5-10 Immune cells have been shown to express MCRs 1, 3, 4, and 5, the activation of which results in direct anti-inflammatory effects independent of endogenous corticosteroid production.4 However, a direct comparison between RCI and synthetic ACTH1-24 depot that assesses the differences in their cortisol production and immunomodulatory effects has not been previously reported. The purpose of this phase 1, single-center, open-label, randomized, parallel study was to directly compare the pharmacodynamics of clinically relevant doses of RCI and synthetic ACTH1-24 depot with oral methylprednisolone used to assess the cortisol equivalent exposure and immunological effects of each drug.

Results: The change from baseline (day −1) for free cortisol concentrations (pg/mL) on study days 1 and 4 after administration of RCI and synthetic ACTH1-24 are presented in Figure 1. A two- to three-fold increase in free cortisol levels was observed after treatment with therapeutic doses of synthetic ACTH1-24 depot compared with RCI. Methylprednisolone results were consistent with the known suppression of free cortisol. Analyses of additional pharmacodynamics and immunological markers are ongoing.

Conclusion: At clinical doses, RCI induces less cortisol than synthetic ACTH1-24 depot. These results suggest that the therapeutic efficacy of RCI may be attributed to mechanisms independent of endogenous corticosteroid production. 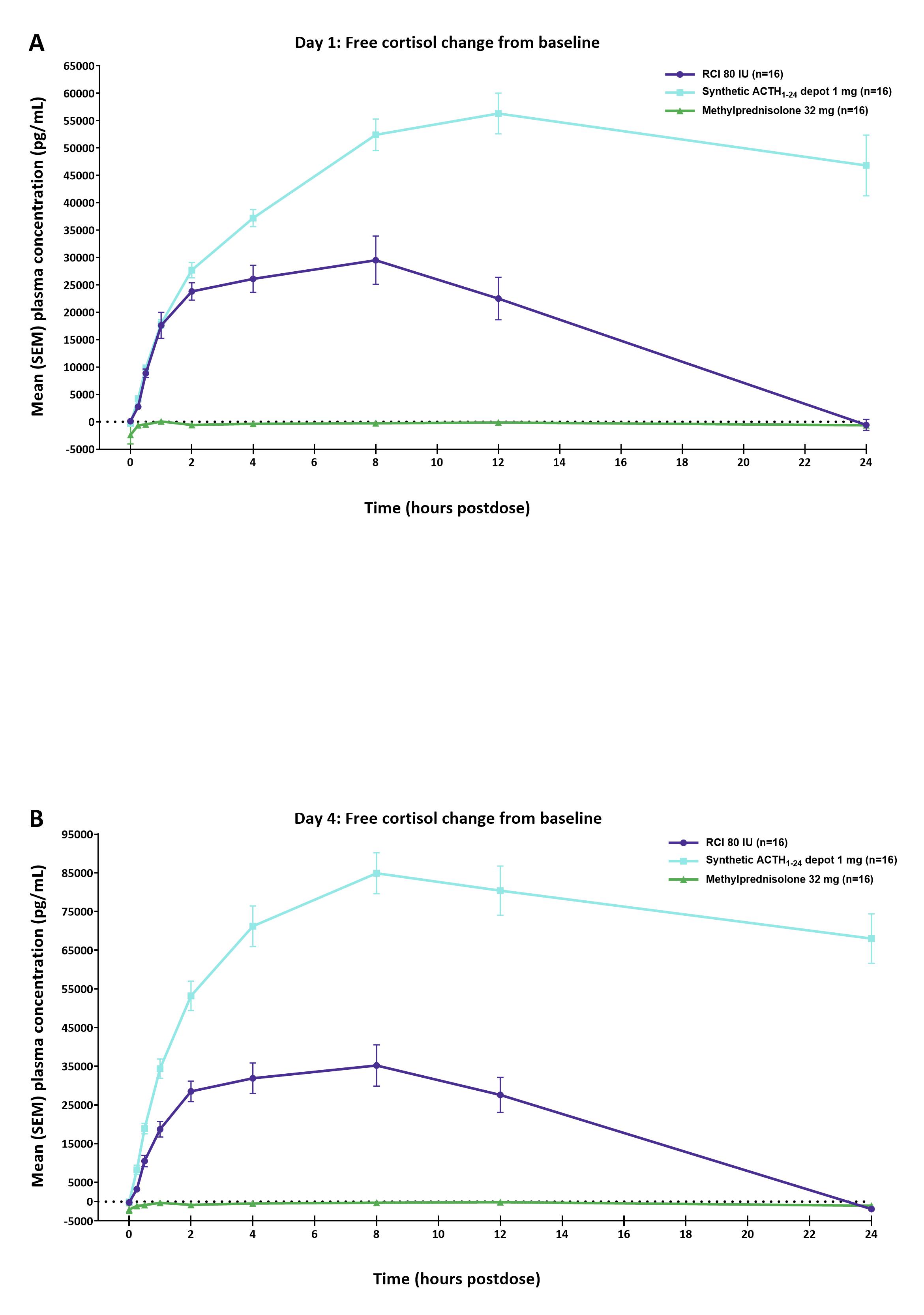