Purpose: Corticosteroids are primarily used for treatment of atopic dermatitis or eczema, and monoclonal antibodies are an emerging therapy for the same. However, skin atrophy and other safety issues associated with the repeated use of corticosteroids and high cost of biologics are big concerns. Literature reports that therapeutic agents including cromolyn sodium with the ability to stabilize mast cells from degranulation can be an alternative treatment option. However, clinical studies report limited effectiveness of cromolyn sodium, which may be attributed to its low penetration in the skin, due to its hydrophilic nature and barrier properties of the outermost lipophilic skin layer, stratum corneum. Our aim is to develop a topical gel that permeates into the deeper layers of skin. Novel penetration enhancers such as salcaprozate sodium (SNAC) and other functional excipients will be evaluated for achieving the required permeation characteristics.

Methods:  A high-performance liquid chromatography (HPLC) based analytical method for quantitative estimation of cromolyn sodium was developed and validated for inter- and intra-day accuracy and precision. Solubility of cromolyn sodium and SNAC in propylene glycol was determined. Three gel formulations containing cromolyn sodium, without (control) and with different amounts of SNAC (2.5% and 4.5% w/w) were prepared individually, using hydroxy propyl cellulose as the gelling agent. Drug content and uniformity of all the gels was evaluated using HPLC (n=3).  In vitro release of cromolyn sodium from the prepared gels through synthetic nylon membrane (0.22 µm) was investigated using Franz Diffusion Cells (n=3) for 6 h, to determine the effect of SNAC on the same. Statistical analysis was performed using one-way analysis of variance.

Results: The developed HPLC method involved isocratic elution on Kinetex® 5 µm Biphenyl 100 Ao, 250 X 4.6 mm C18 column, at a ﬂow rate of 1.1 mL/min and column temperature of 40°C, after injecting 35 µL of sample and using methanol (38%) and 62% of 0.1M phosphate buffer (pH 4.0) as mobile phase and UV detection at 236 nm. Linearity range was found to be between 0.1-50 µg/mL drug concentration. Limits of drug detection and quantitation were determined to be 0.01 and 0.04 µg/mL, respectively. Inter and intra-day accuracy for the samples in the linearity range, varied between 98-101% and the precision was < 3%. These values were acceptable as per ICH guidelines. More than 9.5 % w/w and  6% w/w of cromolyn sodium and salcaprozate sodium could be respectively solubilized in propylene glycol. Three clear and transparent gels, each containing 4% cromolyn sodium, 1% hydroxypropyl cellulose as gelling agent, and 0, 2.5, and 4.5% SNAC, respectively, were formulated. Drug content recovery for all the gels ranged from 96.52 ± 3.23 to 101.06 ± 3.77%. About 60% of the added cromolyn sodium (~4000 µg) was observed to be released from all the gels after 6 h and no significant difference in their release profiles was observed (p >0.05, Figure 1). 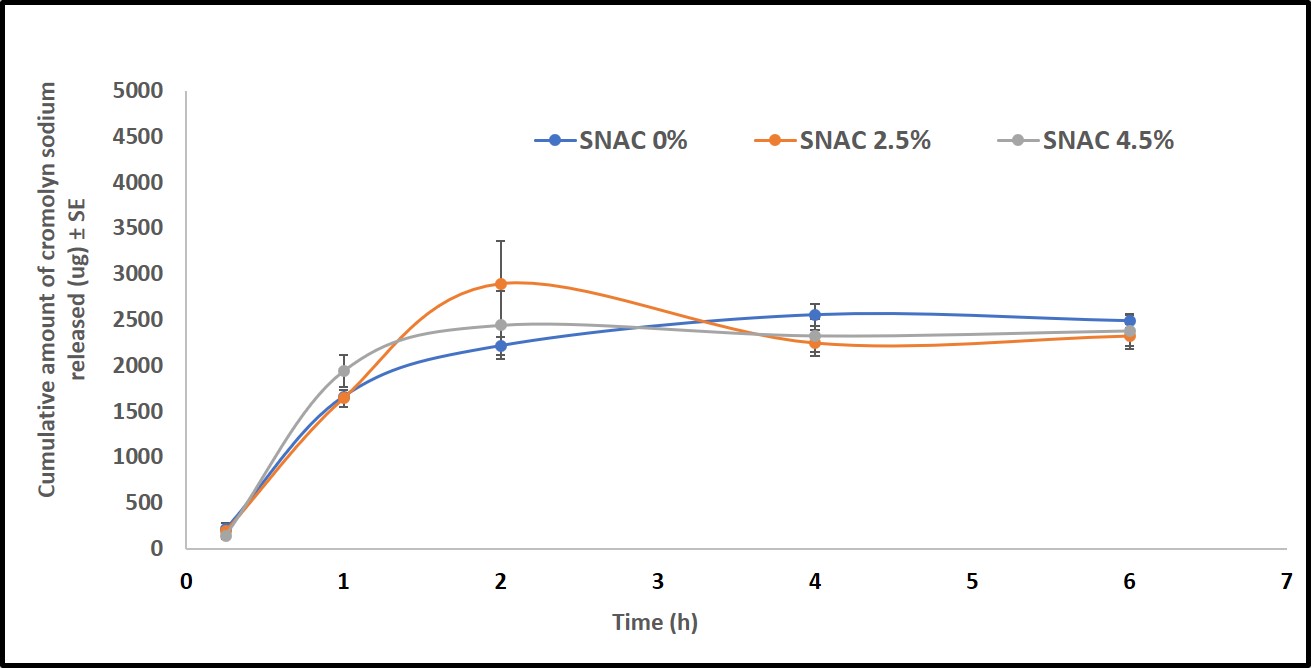