Purpose: Our aim is to develop a pharmacokinetic model of exenatide to support the proposed dosage regimen change for exenatide ER from once weekly to every four weeks based on a recent study conducted by Wysham et al.

Methods: The exenatide new compound profile was developed using physio-chemical properties and pharmacokinetic parameters from the literature. The model was built using the SimcypⓇ (version 19) with a minimal PBPK distribution and mechanistic subcutaneous absorption models in healthy volunteer population. We stimulated the zero-order drug release only, which makes up 37% of the subcutaneous dose. The systemic clearance of exenatide in humans is 7.8 L/h and lymphatic clearance is 1.82 L/h. Steady state plasma concentration (Css) for exenatide was simulated and compared with the literature value in the recent published clinical study.  The trial design was set to model the clinical data of administering 2 mg of exenatide weekly dose for a period of four weeks.

Results: The developed PBPK model reasonably predicted the plasma concentration at steady state (Css) and volume of distribution (Vd), shown in Table 1. They were within the acceptable fold range of (0.5-2) of the observed data extracted from the analysis of a previous in vivo study by Cirincione et al. We modeled the release of exenatide ER 2 mg weekly dose for four weeks. Our results indicated that the Css range of 508 ng/L was reached by 6 weeks, this is in agreement with the published parameters extracted from the study conducted by Cirincione et al. Our analysis of the terminal slope of Cirincione data confirms that the release of the drug continues up to 6-7 weeks after administration. The simulation of once every four weeks exenatide ER 2 mg resulted in a Css of 127 ng/L, which may reflect an observed value of 75 ng/L (if we factor the 1.69 fold in). This steady state value is above the exenatide minimum effective concentration MEC (50 ng/L) and thus can maintain the patient HbA1C within a desired range. There is no justified reason to target a Css that matches Cmax of (211 ng/L) of the exenatide IR (10 mcg BID). The Cpmax of 211 ng/L after IR injection is eliminated at a half-life of 2.4 hours, allowing for an approximate 5 hours duration of action. For this reason the exenatide IR is administered as a twice a day regimen. The latter is not the case with the ER formula which maintains the Css above 50 ng/L over at least 4 weeks period. Thus the 75 ng/ L generated from the exenatide ER once every four weeks is safe and effective and can help exert the same therapeutic effect of the Css of 300 ng/L resulting from the weekly ER injections.

Conclusion: PBPK Simcyp modeling of exenatide using Simcyp Mechanistic Subcutaneous Model correlated well with published clinical data. Our analysis supports a dosage regimen change of exenatide ER from a weekly dose to a once every 4 weeks dose. This can potentially improve patient compliance by decreasing the frequency of administration and reducing the burden of health care costs. 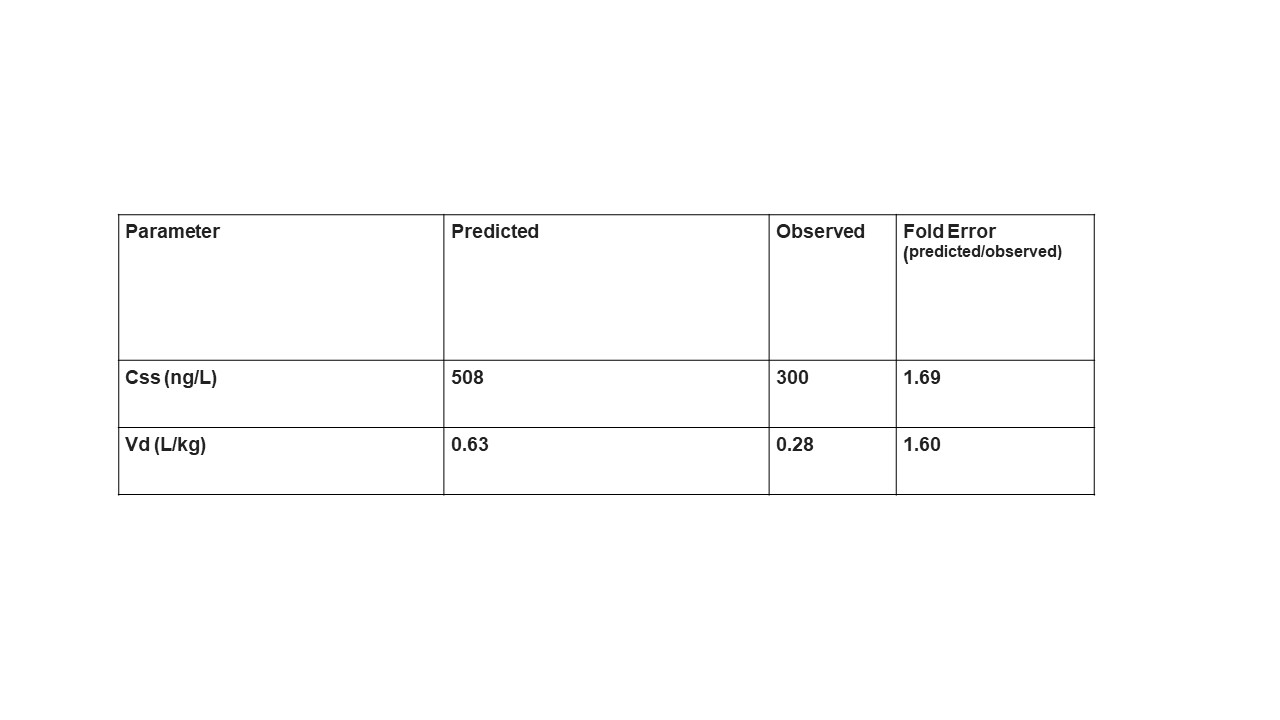