Combination of Gemcitabine and Cytidine Deaminase Inhibitor: A Breakthrough Cocktail for the Treatment of Pancreatic Ductal Adenocarcinoma

Purpose: Pancreatic ductal adenocarcinoma (PDAC) is a highly devastating type of pancreatic cancer and is one of the deadliest cancers. In US, it is the 3rd leading cause of cancer-related death. The 5-year survival rate is less than 10%. PDAC is often diagnosed at an advanced stage and therefore most of the patients are not suitable for any curative surgical resection. Unfortunately, the only option available is chemotherapy treatment which improves the lifespan by an average of 8-16 weeks. Gemcitabine (Gem), a DNA synthesis inhibitor, is still the mainstay drug for the treatment of PDAC. Therapeutic efficacy of Gem is majorly limited by shorter plasma half-life, receptor specific cellular uptake and metabolism in cancer cells. Gem is a hydrophilic drug which requires nucleoside transporters (hENT1/2 or hCNT3) for its efficient uptake. Once inside the cell, Gem is converted to an active triphosphate form which inhibits DNA synthesis and causes apoptosis. However, Gem gets inactivated by cytidine deaminase (CDA). Long term treatment with Gem leads to increased CDA production thereby developing resistance to nucleoside analogs. We hypothesize that combination of Gem with CDA inhibitor like Zebularine (Zeb), could prevent the intracellular degradation of Gem. Combination can potentially result in enhancing the anti-cancer activity of Gem (Fig. 1), reduced dose and dosing frequency and minimizing side effects. The objectives of our study were; (a) to investigate the cytotoxic interaction of Gem and Zeb alone and in combination in 2D pancreatic cell culture models and 3D multicellular tumor spheroids. (b) Evaluating effect of various apoptosis and proliferation markers using flow cytometry and western blot assay.

Methods: Initially we explored the anti-proliferative effects of Gem and Zeb as a single drug and in combination on MiaPaca-2 cells using MTT assay. Combination index was calculated using chou talalay method and cytotoxic interaction was analyzed using cell viability assay and Combenefit software. Effect of Gem, Zeb, and combination treatment on the cell viability of 3D tumor spheroids and its area was carried out using Live/Dead Cell Assay Kit by fluorescence microscopy (Evos imaging system) and ImageJ software respectively. Scratch wound healing assay was conducted to examine the effect of the drugs in inhibiting the in vitro migration of MiaPaca-2 cells. Apoptosis study was carried out using Annexin V apoptosis kit and clonogenic assay was performed to determine cell reproductive death after treatment. Cellular uptake studies of Gem will be carried out in presence of CDA inhibitor in MiaPaca-2 cells. Western blot analysis of various proliferation markers including cleaved caspase-3, bcl2, p21 and survivin will be performed.

Results: Gem and Zeb exhibited dose-dependent inhibition in viability of MiaPaca-2 cells with an IC50 of 0.48 and 67.82 µM, respectively. The IC50 value for Gem at 1:10 ratio reduced by 11 folds (0.04 µM) compared to Gem alone and for Zeb at 1:10 ratio, 154 folds reduction was observed (0.44 µM). The combination index was calculated to be 0.09 (Table 1). Fluorescence images revealed the overall morphology of the spheroids. The density of cells in the core of the control spheroid (not treated) was found low, and no dead cells were identified. By contrast, a higher number of dead cells were observed in Gem and Zeb alone treated spheroids. It was quite interesting to observe a unique spheroid growth inhibition pattern of combination treated spheroid. In spheroids treated with combination of Gem and Zeb, an irregular and undefined spheroid surface was observed post 24 h of treatment and significantly higher red fluorescence (dead cells) indicated enhanced cytotoxicity. This may possibly be due to high levels of cellular stress inside the 3D spheroids (Fig. 2a). In comparison with the control, after Gem, Zeb treatment, spheroid area decreased by 1.6 and 1.3 folds respectively. Remarkably, combination treatment significantly reduced spheroid area by around 2.3 folds (Fig. 2b). Interestingly, combination of Gem and Zeb (1:10 molar ratio) significantly inhibited the cell migration by 1.6-fold compared to Gem and Zeb alone (Fig. 2c). Also, combination of Gem and Zeb showed a reduction in the number of colonies formed in comparison to the control.

Conclusion: Thus, our research confirms that a combination of Gem and Zeb shows remarkable enhancement in cytotoxicity and demonstrates phenomenal synergistic effect. This synergistic combination can be a breakthrough approach for the treatment of PDAC. 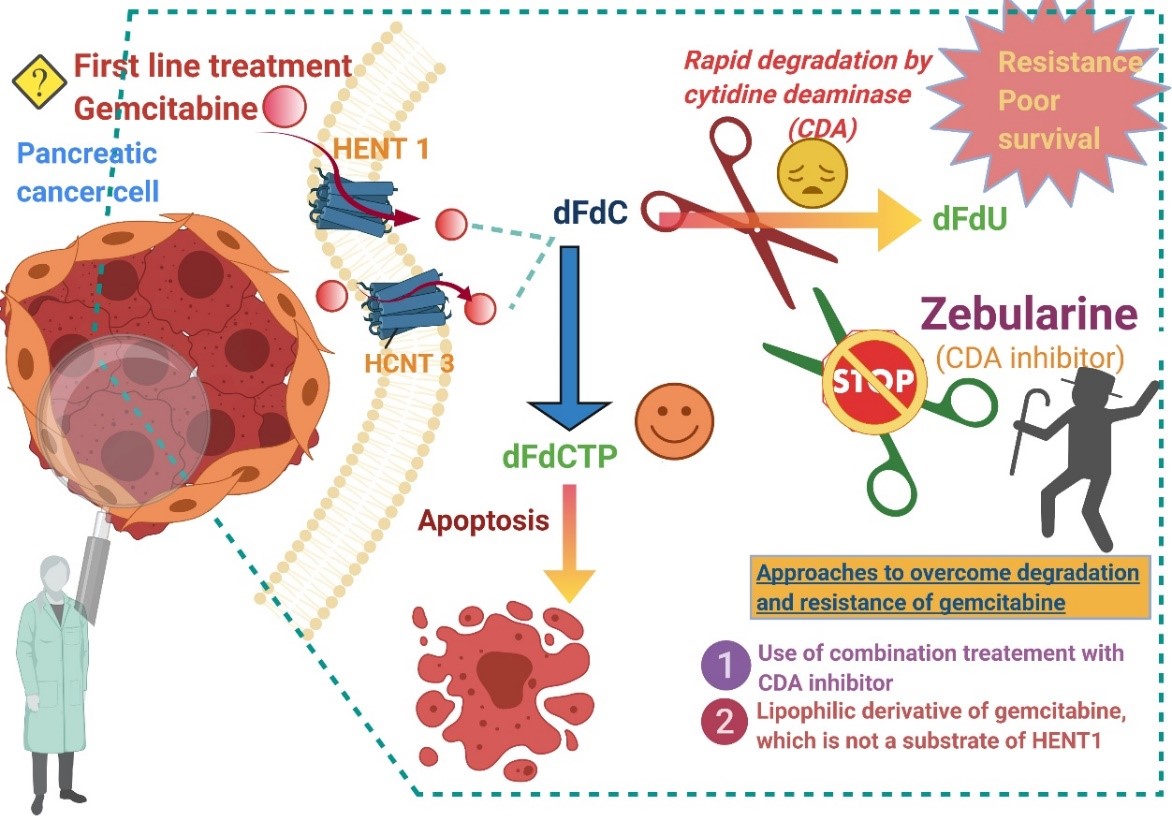