Purpose: Viral titer, expressed as the number of viral units per unit volume of fluid, is a critical measurement in both R&D and production applications using virus, such as protein production using viral vectors, studies of viral infection, and vaccine development. The most commonly used techniques for viral quantification fall into 3 categories: techniques that measure viral infectivity, techniques that measure viral nucleic acid or protein, and direct measurement of physical viral properties. The first two are “wet”, or chemical/biological methods, requiring lab assays performed by highly skilled personnel, and can take from hours to days to perform. In this report, an electrical method for detection of viral particles is used as a fast, simple method of obtaining viral titer. This method has the benefit of only taking minutes, and does not require highly skilled personnel to accomplish.

Methods: Several different viral formulations were measured using the Spectradyne nCS1™ instrument and associated microfluidic cartridges. Measurements required only 3 microliters sample volume in each case. The principle of operation, Microfluidic Resistive Pulse Sensing (MRPS™), is a non-optical technique in which particles are detected individually as they pass through a nanoconstriction sensing element. Because particles are measured individually, the size and concentration of highly polydisperse mixtures can be measured with high resolution.

Results: Clearly defined virus peaks were identified for a variety of virus samples, with the corresponding virus concentration reported (example shown in Figure 1). Particle size distributions from 50nm to 400nm (larger sizes can be measured as well) in size are generated in 5-10 minutes using only 3 µL of sample. Because these measurements can be made so quickly, they can be used during viral processes to monitor titer over time, unlike biological methods which are too time-consuming to be used during viral processing. This is demonstrated by showing the particle size distribution for a virus as it goes through the purification steps in its processing (Figure 2).

Conclusion: This report demonstrates the high speed, simple task of generating viral titer using a direct, electrical measurement of individual virus particles. Because this technique is so quick, it is able to effectively measure virus titer more often, enabling in-process measurements where they could not be done before. 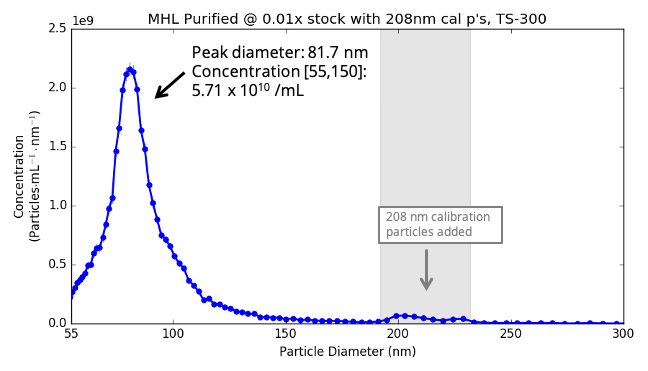 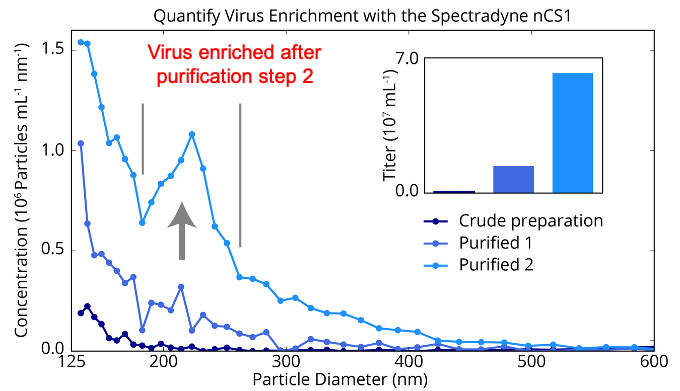