Application of Minimal Physiologically Based Pharmacokinetic Model for Insulin: A Population Analysis

Purpose: Physiologically based pharmacokinetic (PBPK) models are mathematical models, which are parameterized by considering the physiology of the individual. To circumvent the overall model complexity of whole-body PBPK models, the lumping of tissue compartments has been proposed in literatures [1,2]. The resulting PBPK model which inherits physiological attributes of whole-body PBPK models has been defined as the minimal-PBPK model [3]. After the development of the model, subsequent pharmacokinetic (PK) data analysis can be performed by two approaches. Firstly, data from an individual can be analyzed individually. Secondly, data from multiple individuals can be analyzed simultaneously (also known as population PK). The major advantage of population PK is that it considers covariates information (e.g., weight, age, etc.) of the individual for the PK data analysis. However, the major challenge with population PK is the nature of the model used during such analysis, which cannot accommodate all prior information on physiology of the individual [4]. The purpose of this study is to develop a minimal-PBPK model for insulin by considering both the blood flow (perfusion) and permeability of the cell membrane as a structural model for population analysis. Together with this, a residual error model which represents the statistical part of the model were evaluated.

Methods: The minimal-PBPK model development makes use of published PK data of insulin [5]. The data comprise of insulin plasma concentration measurements after an intravenous administration to Yucatan minipigs (n = 12). The objective of this study is to first visualize the data set, which promotes the generation of modeling hypotheses. These hypotheses are then implemented in the model, followed by population analysis using Monolix Suite (Lixoft, France). Data visualization was performed using Datxplore (part of Monolix Suite) as a spaghetti plot and stratified based on weight (Figure 1).

Thereafter, the modeling hypotheses was generated as i) a model with multiple compartments is probably necessary to describe the data and ii) weight might influence the PK of insulin. Therefore, a minimal-PBPK model with two tissue compartments (liver and muscle) has been proposed (Figure 2). The tissues in the model are connected via the systemic circulation (represented by heart) separated into the splanchnic circulation and the peripheral circulation as two parallel subsystems. The splanchnic circulation is formed by the liver and the peripheral circulation comprises microcirculation of the muscle represented as peripheral plasma flow. Since tissues receive a fraction of total cardiac output, parameter fractional distribution (based on the Fick’s Law for tissue distribution) is chosen to describe the fraction of blood flow (Qco) perfusing liver (fd1.Qco), and muscle (fd2.Qco). Additionally, based on a well-mixed organ model, the intrinsic clearance (CLint) accounts for the hepatic extraction of insulin. This model structure was described by a set of differential equations and was used for population analysis by the SAEM algorithm built in the software (Monolix Suite).
Following model assumptions were made during the data analysis using the minimal-PBPK model.


Results: The model applicability was evaluated by fitting of individual data and the outcomes were shown in Figure 3.

Conclusion: Adequate fitting of individual data indicates that the developed model can be used as a structural model for population analysis. 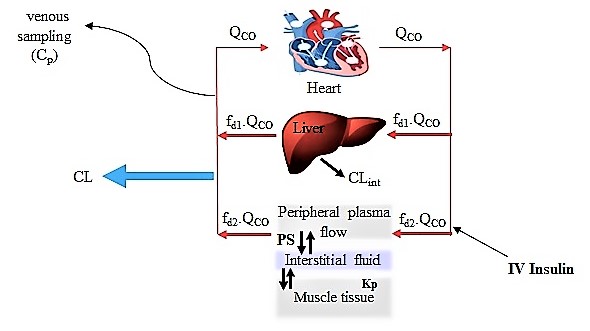 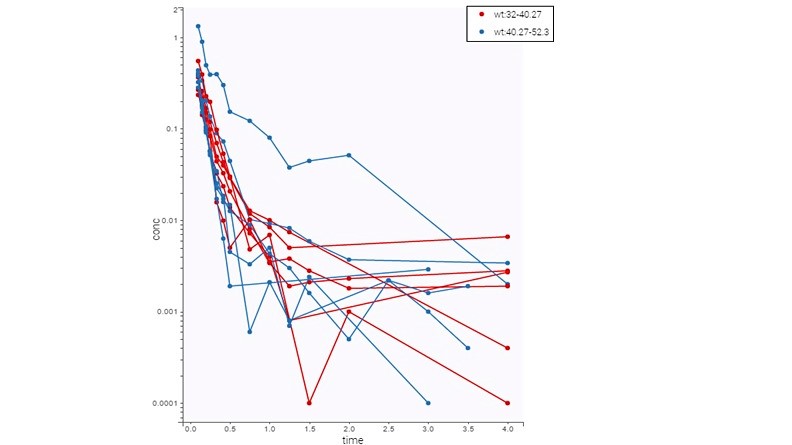 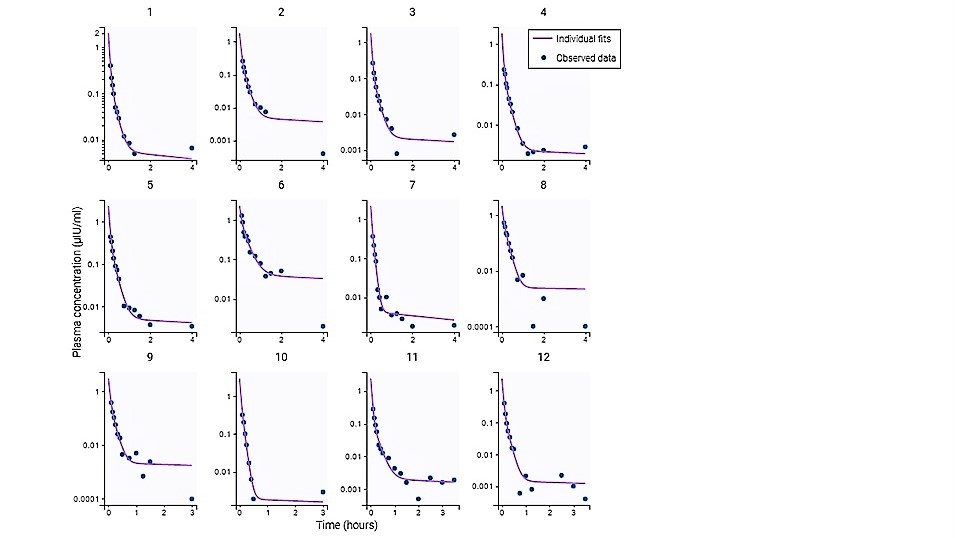