Purpose: Glioblastoma multiforme (GBM) is the most common and malignant form of astrocytoma. Poor availability of anticancer drugs such as Temozolomide (TMZ) at tumor site is one of the major hurdles in GBM treatment. Although TMZ can cross the BBB, alternative treatment approaches are necessary owing to its side effects. Epidermal growth factor receptor (EGFR) amplification in GBM is one of factors associated with treatment resistance. This can be overcome by using nano particulate delivery in presence of external physical field to enhance permeation. Thus, a polymeric nanocarrier system encapsulated with TMZ, targeted by the magnetic field, might offer the viable alternative to the current invasive therapeutic measures for the GBM treatment.

Methods: Oleic acid magnetic nanoparticles (OMNP) were synthesized using thermal decomposition method. Nano carrier of poly(lactic-co-glycolic acid) (PLGA) and poly(lactic acid)− methoxy poly(ethylene oxide) (PLA−PEG) was prepared by single emulsion solvent evaporation method. TMZ loaded magnetic nanoparticles were prepared and characterized for morphology, particle size, zeta potential, encapsulation efficiency and physical stability. Also, NMR and FT IR analysis were carried out to confirm the co polymer linkage. Further, the effect of concentration (%) of polyvinyl alcohol (PVA) was evaluated to optimize the drug loading and encapsulation efficiency. The effect of TMZ-loaded magnetic nanoparticles on the cellular proliferation of U-87, U-138 was evaluated using MTT assay. Bio distribution study was conducted using magnetic nanoparticles loaded with TMZ in Sprague Dawley rats. Here, the magnetic field was generated using permanent magnet which produces a uniform 0.5 Tesla (T) magnetic field. The rat’s head was positioned in the airgap between the circular space of the Halbach Array (magnetic ring) for half hour. After 24 hours of treatment, rats were sacrificed to isolate brain tissues. Plasma samples were withdrawn at 1 and 24 h, respectively, to analyze TMZ. Rat brain tissues were evaluated for iron content by inductive coupled plasma technique. Based on pilot study results, in the main study -  the magnetic field was increased to 1.8 (T). The magnetic field was induced such that the north was aligned to the cerebrum of rat’s brain. Also from the point of rat’s head resting on the surface to the exterior of the magnetic ring was measured for each rat to allow the constant optimized magnetic field induction. TMZ distribution in brain tissue was checked for significant difference in presence and absence of magnet.

Results: A uniform red brick dispersion because of conjugation of ferrous and oleic acid was obtained at 100℃ for 20 min followed by 200℃ for 10 min and 260℃  for 10 min. The synthesized OMNP (10- 30 nm) were characterized for magnetic activity. Coating of PEG PLA - PLGA showed marginal change in particle size but substantial change in zeta potential (negative to neutral). Presence of co polymer block linkage on the surface of OMNP was confirmed by proton NMR and FT IR. TEM analysis showed a spherical particle in the range of 10-30 nm. Drug loading was optimized such that the particle size and stability were not affected. An optimum encapsulation efficiency for TMZ was achieved. During MTT assay, cytotoxicity of TMZ and TMZ-nanoparticles was compared and the results showed that the formulation has higher cell killing and hence the IC 50 values are lower as compared to TMZ alone. Magnetic transport was optimized with permanent disc magnet of different strengths. 0.5 T disc magnet was found to be optimum for 24 h transport study. As compared to pilot study in rats, the magnetic field strength was increased from 0.8 to 1.6 T and hence the TMZ exposure in rats exposed to higher magnetic field increased by 4.6 fold. Rats treated with higher magnetic field oriented in specific direction (North pole facing the center of cerebrum) showed 3.6 fold increased TMZ distribution as compared to the group not exposed to magnetic field. 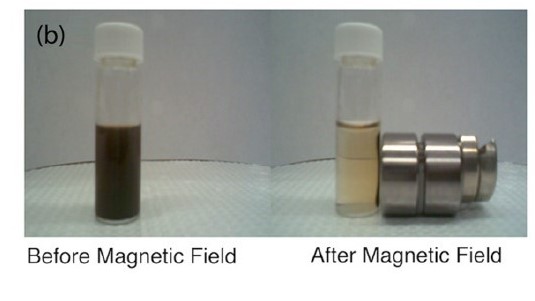 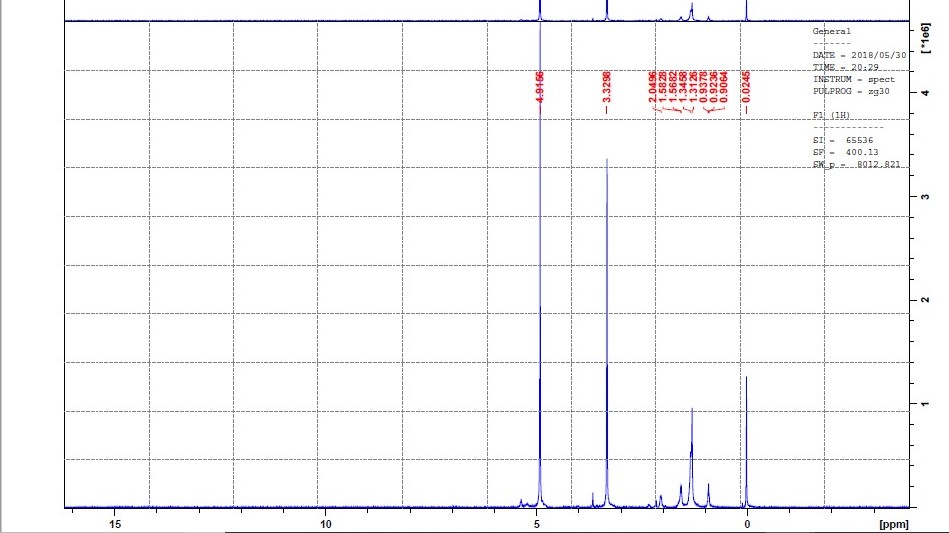