Purpose: Poor aqueous solubility is a significant issue in the current pharmaceutical industry with approximately 90% of new chemical entities in the development pipeline characterised as poorly water-soluble. There are many ways in which poor aqueous solubility may be addressed including particle size reduction, salt formation, cyclodextrin complexation and amorphous solid dispersions (ASD). The latter approach is highly attractive but high risk, due to the inherent instability of the amorphous drug forms. ASDs often contain the drugs in a high energy form but offer increased stability due to significant interaction with the polymeric carrier in which they are embedded. Hot Melt extrusion is a new technology that has shown significant promise in continuously manufacturing ASDs [1]. In this study we examine a model BCS class II drug Albendazole (ABZ), which has been initially utilized as anti-parasite drug to act in the intestinal lumen, but recently shown significant anti-cancer effects. [1]. We adopt a range of pre-screening tools as a means of identifying polymers suitable for formulation of ASDs and we manufacture those polymeric ASDs using HME to examine the potential of this process to produce suitable drug formulation to enable the performance of ABZ.

Methods: ABZ was purchased from (Kemprotech Limited (U.K.) whereas polymeric excipients (Soluplus® (Tg 75oC), Kollidon® VA64 (Tg 107oC), and polyethylene glycol PEG-6000 (Tm 60oC) were generously provided by BASF, (Germany). As an initial pre-screening tool and to gather basic information on durg-polymer miscibility, Hansen solubility parameters (△δ) of ABZ and polymeric excipients were calculated according to group contribution methods developed by Van Krevelen and Hoftyzer [1]. Formulations containing a range of different ABZ loading (0-40%) were manufactured on a HAAKE® MiniLab extruder (Thermo Fisher Scientific, Cheshire, U.K.) operating at 150°C with conical twin screws co-rotating at 10 rpm. 10g of each PM was prepared as described above and manually fed in the extruder. Melt extrudates were collected on a conveyer belt at room temperature ground with mortar and pestle and stored in glass vials over silica gel at 4°C. Raw materials, physical mixtures and extrudates were characterised using a range of different techniques. In brief, PXRD data were acquired using a MiniFlex II powder X-Ray diffractometer (Rigaku Corporation, Japan), whereas thermal analyses were conducted 5 to 10mg of material using a DSC 6000 (Perkin Elmer, Inc., Buckinghamshire, U.K.). The effect of polymer to inhibit ABZ precipitation during dissolution as well as ABZ drug release properties were characterized using a USP type II (paddle) in 900ml of HCl solution pH 1.2 at 100 rpm. For the investigation of precipitation inhibition, polymer (800mg) was added into the dissolution medium 30 min prior dissolution test, ABZ (200mg) was dissolved in 5ml of solvent (1ml of 32% w/w HCl in 1000ml of methanol), sonicated for 30 min and then added into the dissolution medium. Quantification of ABZ concentration in the aliquot samples was undertaken using UV-spectroscopy.

Results: A range of polymeric excipients was screened and ABZ was found to be highly miscible (△δ ≤ 2MPa0.5) with three pharmaceutically relevant polymers which predicted miscibility decreased in the following order: Kollidon® VA64 > Soluplus® > PEG-6000 with △δ 0.59, 0.82 and 1.61, respectively. Thermal analysis and X-ray diffractometry confirmed that ABZ had a defined melting point at 210oC and distinct diffraction bands that could be used to further characterize the presence of residual crystal content in HME amorphous solid dispersions. ASDs manufactured using Soluplus® and Kollidon® VA64 were DSC and x-ray amorphous at drug loadings up to 20% w/w, whereas PEG-6000 showed residual crystalline content. Despite each of the three polymers having good miscibility (as defined by △δ ≤ 2MPa0.5) there were significant differences in the miscibility limits of the drug in each of the polymers. In regard to the ability to inhibit ABZ precipitation from a supersaturated solution, Kollidon® VA64 was significantly better than Soluplus® with PEG-6000 showing less ability to inhibit recrystallisation (Figure. 1). Drug release properties varied as a function of drug content and polymer loading. The dissolution results demonstrated that all hot-melt extruded formulations provided oversaturated drug concentrations during drug release relative to pure crystalline ABZ. As shown in Figure 2, Kollidon® VA64 released ABZ at a faster rate and to a greater extent than the other two miscible polymers (PEG-6000and Soluplus®). Interestingly, this study demonstrated the rank order of miscibility of ABZ with polymeric excipients matched inhibition of crystallisation (precipitation) during supersaturation drug dissolution studies.

Conclusion: In this study we have manufactured amorphous solid dispersions of ABZ and shown that the drug release performance can be improved. A range of pre-screening tools were investigated, and it was shown that a combination of methods can be employed to help identify appropriate polymer systems and drug loadings and this a formulation design space for effective manufacture of drug enabled formulations. 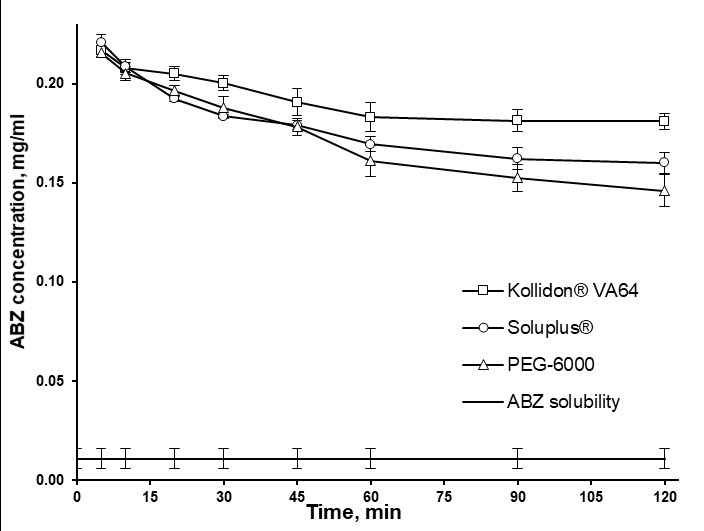 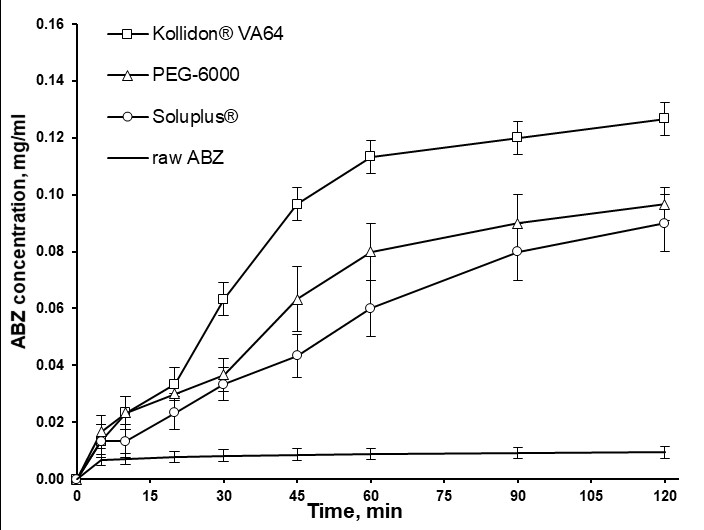