Purpose: Proton pump inhibitors (PPIs) are extensively given to patients for the treatment of gastric acid-related disorders. The therapeutic effect of taking PPIs results in an elevation of intragastric pH and ease symptoms such as acid reflux, but at the same time, this therapeutic effect often leads to a reduction in the systemic absorption of some oral medications (especially basic drugs) by decreasing their solubility in the stomach. Since such an effect can be impactful and reduce the efficacy of the drug, lots of efforts have been made into modeling and developing in vitro assays to better forecast the PPI effect in the drug development process. Despite the efforts, it remains challenging to predict the effect of PPIs on victim drug’s exposure without a dynamic model that can mimic the gastrointestinal tract. In this study, we evaluated the dynamic Triskelion’s Gastro-Intestinal Model (Tiny-TIM) to test the PPI effect with a list of compounds in human including free base and salt.

Methods: Tiny-TIM is a dynamic and multi-compartmental model which is designed to simulate the absorption behavior of oral drugs during GI transit. It consists of the stomach, pylorus, small intestine, and a hollow fiber filter (Figure 1). The conditions in the compartments are computer-controlled via pH electrodes, and temperature and pressure sensors. The secretions into the gastric compartment consist of artificial saliva with electrolytes and alpha-amylase and gastric juice with hydrochloric acid, pepsin, and lipase. In the small-intestinal compartments, the secretion fluids consist of bicarbonate, electrolytes, pancreatic juice with digestive enzymes, and bile. For the fasted state the gastric pH dropped from 3.0 to 1.5± 0.2 within 30 min by simulated secretion of HCl. For the fasted PPI state, everything was kept the same except that the gastric pH was modulated by the drug substance without simulating the secretion of HCl. The running time of each experiment was 5 hours and data was analyzed to 4 hours using an HPLC.

Results: To exam the PPI effect, the ratio of % bio-accessibility in PPI and non-PPI conditions (% bio-accessibility in PPI / % bio-accessibility in non-PPI) was calculated for each compound and compared with the literature data (calculated based on the plasma area under curve AUC0-24 in PPI / AUC0-24 in non-PPI) where % bio-accessibility = accumulated bio-accessible drug *100 / dose. In general, the results generated by Tiny-TIM were in good agreement with reported finding for all of 12 compounds (Figure 2). Tiny-TIM predicted significant negative PPI effect for atazanavir sulfate, GDC-B, GDC-C, GDC-D, dasatinib, dipyridamole, erlotinib, and ketoconazole, but no PPI effect for alectinib, GDC-A, GDC-E, and GDC-F. For free bases, they are likely to experience negative PPI effect because the reduced gastric solubility which is triggered by the elevated gastric pH leads to the loss of solubilization of free bases in the stomach. However, if it is a low dose, this loss of solubilization in the stomach can be covered by the dissolution in the small intestine making no difference in drug absorption. This helps to explain why PPIs in some cases has no effect on the absorptions of basic drugs at low doses. As PPI effect in free bases can be explained from the dose and the solubility in the small intestine, dose number (Do) was obtained. The expectation of introducing Do was to differentiate a negative PPI effect from a no effect for basic drugs based on Do value, for example, when Do value is greater than 1, PPI effect is negative; and when Do value is less than 1, PPI effect is negligible. However, the result indicated Do value is not applicable to forecast in-vivo PPI effect for free bases. For compounds that are salts, the drug absorption in the GI tract gets more complexed. Since salts can self-modulate pH upon contacting/dissolving in aqueous and have other factors (ie. superstation ratio, precipitation rate, degree of precipitation, and the form and particle size of the precipitant), predicting the effect of PPIs on the exposure of salts based on its solubility and the initial dose remains a challenge. This difference in predictability or ratios could come from transporters that are involved in pharmacokinetic processes (absorption, distribution, metabolism, and elimination) but are not captured in Tiny-TIM. As long as Tiny-TIM can predict the type of PPI effect correctly, it is believed to be a very reliable and promising GI model.

Conclusion: Tiny-TIM, a dynamic multi-compartmental absorption model, was used to test the PPI effect of a list of compounds containing free bases and salts. All drugs were predicted to have either a negative or no PPI effect which matched with the clinical findings. The deviation in PPI ratios is because Tiny-TIM is unable to capture the impact of gut metabolism, hepatic clearance, and transporters on exposure. However, Tiny-TIM successfully forecasted the type of PPI effect, even for salt at low doses. 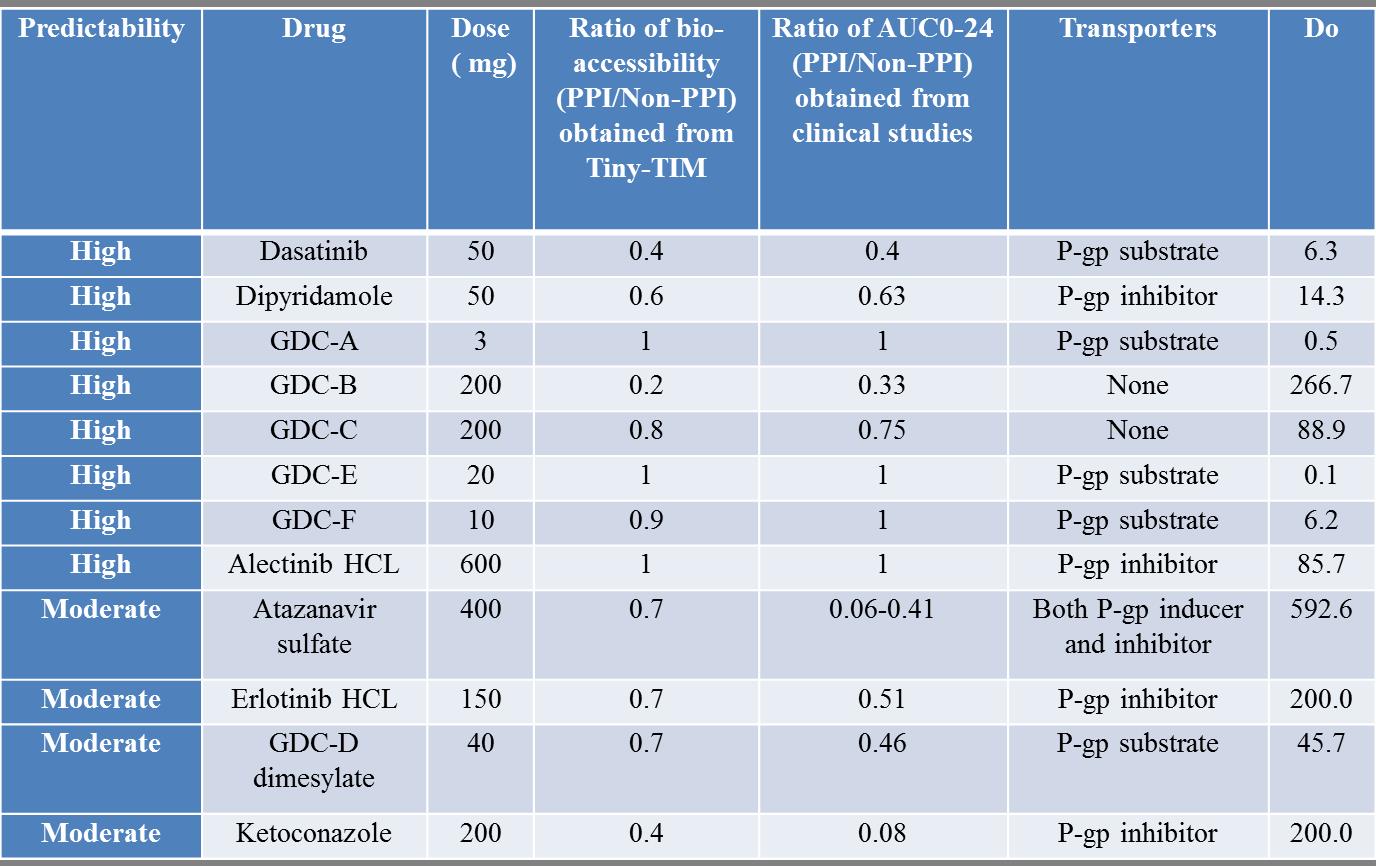