Purpose: Microneedles (MNs) are a minimally invasive physical technique that can subtly pierce the skin and circumvent the stratum corneum (SC, the outermost layer responsible for the main barrier function of the skin). This offers numerous opportunities for the effective transdermal delivery of a broad range of therapeutics, including hydrophilic small molecular weight drugs, peptides, proteins, and vaccines. The success of a solid MN-assisted drug delivery technique, where micropores are created in the skin before application of a drug formulation patch, is highly dependent on the continuous availability of open micropores for drug diffusion into the systemic circulation. Micropore lifetime has important implications for MN-assisted drug delivery timeframe and depends on the skin innate healing abilities, which are controlled by skin barrier and structural functionalities that are different in diverse ethnic/racial skin types. With the broadening applicability of MN technology, particularly in developing countries around the world and the rapidly changing demographics in the United States, it is important to understand how properties of ethnic/racial skin types affect micropore lifetime. This study sought to investigate differences in micropore closure time after MN application in subjects of diverse ethnic/racial skin types.

Methods: All study procedures were approved by the University of Iowa Institutional Review Board and subjects provided written informed consent before starting the study. Nine sites were identified on the upper arm: MN treatment sites occluded with patches (n=3), non-MN treated sites occluded with patches (n=3), and no treatment control sites (n=3). MNs of 800 µm length were applied to the MN treatment sites using stainless steel arrays containing 50 MNs each. Impedance spectroscopy and transepidermal water loss (TEWL) were measured at baseline and post-MN to confirm micropore formation. Impedance spectroscopy was measured every 24h up to 96h to estimate micropore closure times. Skin color (L* parameter, describing light/dark) was measured with a tristimulus colorimeter and skin hydration was measured using a corneometer.

Conclusion: These data demonstrate for the first time that there are differences in micropore closure time after MN application in subjects of diverse ethnic/racial skin types. This could have important implications for safety and efficacy when using MNs to transdermally deliver drugs in diverse patient populations. Next steps for this research will include drug delivery studies to correlate micropore closure time with drug permeation through ethnic/racial skin treated with MNs. 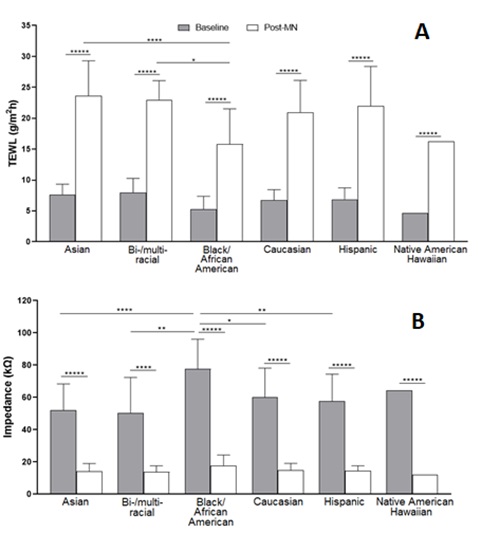