Purpose: The study aimed to evaluate for the first time the anti-proliferation properties of leaf extract of Crinum latifolium on C4-II cervical cancer cells in vitro.

Methods: Leaf extract of C. latifolium treatment was obtained by filtered the suspended powdered dried leaf sample in the culture media. Cervical cells were seeded on media with and/or without the plant extract, epidermal growth factor (EGF) or Erlotinib, an epidermal growth factor receptor (EGFR) inhibitor in order to assess the suppressive property of the EGF-induced proliferation of the C4-II cervical cancer cells. Selected gene expressions in the AKT-PI3K-mTOR and RAS-RAF-MEK-ERK MAPK pathways were investigated to understand the anti-cancer proliferation mechanism of this plant at genetic level.

Results: Our cell viability data revealed that leaf extract of C. latifolium is sufficient to significantly suppress EGF-induced proliferation of C4-II cell growth in a dose dependent manner similar to the inhibition effect of Erlotinib, an EGFR inhibitor drug used in cancer therapy. Crinum extract suppression of cell proliferation was carried out by suppressing the upstream genes of the AKT-PI3K-mTOR and RAS-RAF-MEK-ERK MAPK pathways, namely AKT1 and RAF2 that are crucial for signal transduction cascade for cell propagation and cell cycle progression.

Conclusion: We demonstrate here for the first time that leaf extract of C. latifolium possesses potent anti-proliferative activities against C4-II cervical cancer cells in vitro and may be used for the treatment of a wide range of other cancers with aggressive proliferation. 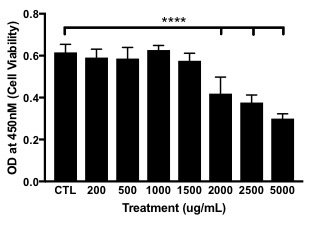