Results: Leuprolide is a potent luteinizing hormone releasing hormone (LHRH) agonist that stimulates the release of luteinizing hormone. Leuprolide has been used successfully for the palliative treatment of prostate cancer by saturation and down-regulation of pituitary receptors, result in the suppression of testosterone production. Commercially, LHRH agonists have been formulated in controlled release PLGA microspheres administered as a depot injection lasting up to 1 month. In previous work, LCFS composed of SMO was studied for a sustained release of leuprolide1. SMO has been used as a pharmaceutical excipient and regarded as safe through many medical applications. The LCFS exists as a liquid phase in the absence of aqueous fluid and forms into a liquid crystal in the presence of aqueous fluid. The pharmacokinetic profiles of low fat animals such as rat, beagle dog were shown to have low initial burst and sustained release of leuprolide. On the other hand, the pharmacokinetic profiles were shown to have a huge initial burst release in animal species with developed subcutaneous fat, such as the human, and drug release was not maintained for one-month. To solve this problem, a semi-gel formulation was prepared by adding water into pre-concentrate to increase sol-gel transition rate. Sol-gel transition was confirmed over time in the subcutaneous fat tissues of pigs. As a result, in the case of pig and mini-pig subcutaneous tissue, the pre-concentrate solution was slowly transitioned to gel. The semi-gel formulation containing water was quickly transitioned to gel after subcutaneously injected into pig and mini-pig. Sol-gel transition rate depends on the water content, and as expected, the PK profiles of semi-gel and pre-concentrate were different. Plasma leuprolide concentration of semi-gel was shown to have a lower initial burst release than pre-concentrate formulation due to fast sol-gel transition. The AUC(0-3days) (Area Under the Curve) of the pre-concentrate was 7,864 μg hr/mL, but the AUC(0-3days of the Semi-gel was 5,528 μg hr/mL, which was approximately 30% reduced. The initial burst release of the semi-gel was lowered, so that the drug was remained in the gel formulation maintaining a higher drug concentration in the blood than the pre-concentrate formulation.

Conclusion: Consequently, a semi-gel LCFS was developed by adding water into LCFS to improve the sustained release profile of leuprolide and reduce the initial burst release. The semi-gel LCFS was quickly transitioned to gel in the subcutaneous tissue in vivo compared to pre-concentrate formulation. Based on the results, semi-gel LCFS will be utilized to potential use in clinically available sustained-release formulation. 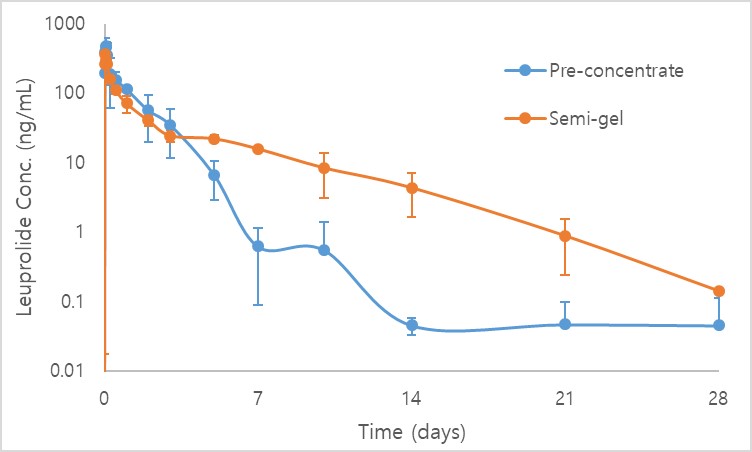 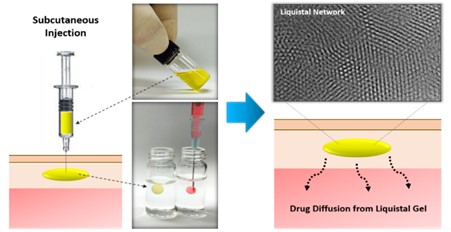