Purpose: The high incidence of breast tumors and the lack of strategies for local management of non-invasive, low grade ductal carcinoma in situ (DCIS) and atypical lesions led us to propose the development of nanocarriers for intraductal drug administration. Aiming to obtain a prolonged drug retention and localization at the target site, improved efficacy and reduction of systemic adverse effects, we produced multifunctional nanoemulsions (NE) containing the chemotherapeutic agent piplartine. Piplartine (piperlongumine) is an alkaloid/amide component of the Piper species that has significant cytotoxic and antiproliferative activity in several tumor cell lines. Piplartine was incorporated into nanoemulsions which had the surface modified with hyaluronic acid (NE-HA) to confer bioadhesive properties.

Methods: Nanoemulsions were prepared with tradition oil in water method, sonicating a phosphatidylcholine-based surfactant blend, oil and aqueous phases. The formulations were subsequently characterized for droplet size and zeta potential. To assess the ability of NE to promote retention in the breast tissue following intraductal administration in female sprague dawley rats, Alexa Fluor 647 was encapsulated in the NE-HA, and an in vivo imaging system (IVIS Spectrum) was used to track fluorescence for 1-120 h post-administration. To evaluate whether drug encapsulation in the nanocarrier improved cytotoxicity of the chemotherapeutic agent, the viability of breast cancer cells (MCF7 and T47D) in 2D (monolayer) or 3D (speheroid) models was assessed after treatment with the unloaded NEs and drug-loaded NEs or drug solution for 48 h. Subsequently, formulation in vivo efficacy was assessed in a model of chemical carcinogenesis (induced with 50 mg/Kg of N-metil-N-nitrosourea) using female sprague dawley rats (8 weeks old). Animals were divided in 3 groups (n= 8 animals/group) based on the treatment they were going to receive: i) control non-induced, ii) control induced and non-treated and iii) induced and treated with NE-HA intraductally. Four weeks after the induction, the treated group received 20 µL per duct of NE-HA + piplartine every 2 weeks. After completing 3 cycles of treatment, animals were euthanatized. Number and size of tumors were registered, and the mammary glands were collected for histological analyses and image acquisition.

Results: The diameter of the NE-HA was 76.7 ± 8.8 nm, and their zeta potential was -28.7 ± 5.6 mV. Intraductal administration of the fluorescent marker solution or intraperitoneal NE administration resulted in a rapid decay of the fluorescence signal. On the other hand, animals subjected to intraductal administration of NEHA depicted stronger fluorescence signal in the mammary region during 120 h, demonstrating that the nanocarrier localized and prolonged the retention of the fluorescent marker in the mammary tissue. Cell viability was approximately 90% after 48 h of treatment for both unloaded formulations (without drug), suggesting that they did not exhibit cytotoxicity. The concentration of piplartine in solution necessary to reduce viability to 50% (IC50) was 11.3 μM in MCF-7 and 10.1 μM in T47-D. Drug encapsulation in NE-HA shifted the cell viability curve to the left, decreasing IC50 by 2.7-4.0 times depending on the cell line. Untreated spheroids were spherical and homogeneous with an average diameter of 841 μm ± 78.9 (MCF-7) and 1.052 μm ± 49.9 (T47-D). Unloaded NE did not show cytotoxic effects after 48 h treatment. Compared to the drug in solution (IC50 93.0 μM in T47-D and 191.9 μM in MCF-7), drug-containing NE-HA reduced the IC50 by 4.1-9.1 times respectively. Palpable tumors developed in 77.7% of the animals in the induced non-treated (2.5 ± 1.6 tumors per animal) group. On the other hand, similar to the non-induced group, no tumor development was observed in the NE-HA group. These results were confirmed through histological analyzes. We observed the presence of DCIS in the non-treated group, while in both, NE-HA treated and non-induced groups, the mammary glands have a similar pattern of organization and are compatible with the absence of DCIS.

Conclusion: These results demonstrate that the nanocarrier was able to increase the cytotoxic effect of piplartine in 2D and 3D cultures, but that a more pronounced cytotoxic effect was observed in 3D culture. This is a very interesting result considering that the 3D model better mimics the complex architecture and organization of solid tumors. Moreover, the nanocarrier improved retention of encapsulated compounds in the mammary tissue while reducing tumor development after MNU induction. All of these advantages support the potential benefit of the intraductal nanoemulsion for localized DCIS treatment. 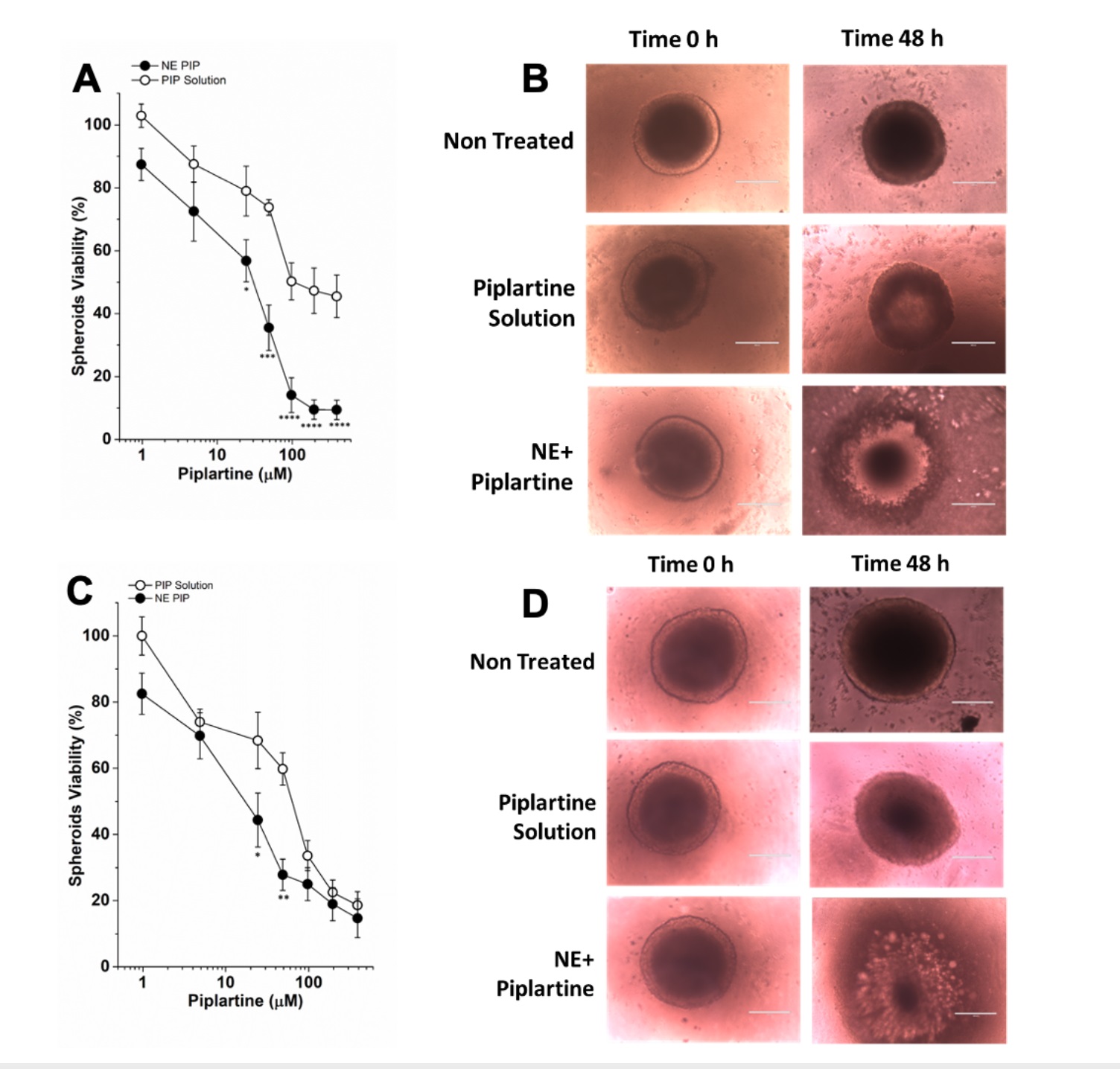