Purpose: The purpose of this study is to formulate a nanoparticle delivery system intended for tumor-specific accumulation and release of recombinant murine Granulocyte-Macrophage Colony-Stimulating Factor (GM-CSF) in vivo to alleviate tumor hypoxia and immunosuppression, which are both significant drivers of tumor progression and treatment resistance in breast cancer [1, 2]. Our laboratory was the first to demonstrate the novel capability of GM-CSF to influence both tumor oxygenation and anti-tumor immunity in a PyMT mouse model of breast cancer through modulation of tumor-associated macrophage (TAM) functions, in which intratumoral (IT) injections of recombinant GM-CSF 1) altered the TAM profile from immunosuppressive M2-like to immunosupportive M1-like, and 2) stimulated soluble VEGFR-1 production from TAMs that sequestered VEGF and reduced angiogenesis [3, 4]. Further, our recent pilot data demonstrates that smaller doses of IT GM-CSF increases both tumor oxygen and pH in vivo. As a result of these regulatory capabilities, we formulated GM-CSF-loaded PLGA/PEG-PLGA nanoparticles (NPs) using a phase separation technique and characterized these NPs, in vitro. This study has allowed us to determine an optimal formulation intended for further in vivo applications.

Methods: PEG-PLGA [Poly(ethylene-glycol)-poly(lactic-co-glycolic acid))] and PLGA-COOBn were synthesized using ring-opening polymerization. Recombinant murine GM-CSF was dissolved in NaCl solution before precipitation in glycofurol on ice. PLGA-PEG, PLGA-COOH (Resomer®), and/or PLGA-COOBn were dissolved in 6, 9, or 12% w/v dimethyl isosorbide and mixed in various ratios under stirring. Glycofurol, either alone or containing GM-CSF protein precipitate, was then added to the mixture. Phase separation was initiated under continual stirring by addition of aqueous phase buffer, followed by centrifugation twice to achieve the final nanoparticle suspension. Supernatant was collected from wash and quantified by ELISA as the unentrapped protein fraction. Theoretical entrapment efficiency = [(protein added-free unentrapped protein) / protein added] x 100. NPs were diluted and analyzed for size distribution by Nanoparticle Tracking Analysis and for zeta potential values by Electrophoretic Light Scattering. To determine morphology, a drop of diluted sample was placed on a silicon wafer overnight, placed in a Denton Benchtop Desk V Sputter for a thin coat of gold-palladium, and imaged with a Scanning Electron Microscope. GM-CSF release from NPs was monitored in 2 mL of 0.05M Tris-HCl, pH=7.4 + 0.9% NaCl + 0.1% BSA under agitation at 37ºC. A small amount of sample was removed at pre-determined time points, centrifuged, and the supernatant subject to dilution and further quantification by ELISA. Released protein was assessed for functionality by treating murine bone marrow monocytes with 100 ng/ml collected GM-CSF followed by intracellular staining of phosphorylated STAT5 and analysis by flow cytometry. Empty NPs were tested for their potential to elicit an immunogenic response from bone marrow-derived macrophages (BMDM) in vitro by incubation for 24 hours followed by qPCR analysis for genes that regulate inflammation. To determine concentration-dependent cytotoxicity in vitro, BMDM were again treated with varying doses of NPs for 24 hours followed by trypan blue exclusion assay to determine changes in cell membrane integrity and MTT assay to determine changes in cell viability.

Results: Our optimal formulation consists of 50% PLGA-PEG and 50% PLGA-COOBn polymers dissolved in solvent at 9% w/v. These NPs yield an average size of 146 nm +/- 41 nm S.D. with a uniform size distribution, which is sufficient for passive targeting of tumors via the Enhanced Permeability and Retention effect [5]. NPs yield a zeta potential of -47.7 +/- 5.96 mV and a spherical, uniform morphology as determined by SEM. Entrapment efficiency of GM-CSF was calculated to be 79.2% +/- 3.4 SEM. In vitro release of GM-CSF was achieved with observation of an initial “burst release” followed by a continuation of sustained release monitored over 72 hours. GM-CSF remained functionally active after initial precipitation and, importantly, after release from nanoparticles. Also, 1 mg/mL NPs elicited insignificant gene transcription of Il-12, Tnfa, Il-6, iNos, and Arg1 in comparison to IFNy+LPS treatment from BMDM after 24 hr incubation. BMDM also maintained 92% cell viability by MTT with 97% cells negative for trypan blue staining. These data suggest NPs will not elicit immunogenic or cytotoxic effects on macrophages during in vivo encounters/clearance.

Conclusion: Here we have successfully formulated and characterized GM-CSF-loaded PLGA/PEG-PLGA NPs in vitro and demonstrated feasibility for in vivo administration. This study lays the groundwork for nanoparticle-mediated delivery of GM-CSF to PyMT breast tumors for targeted therapeutic effects. 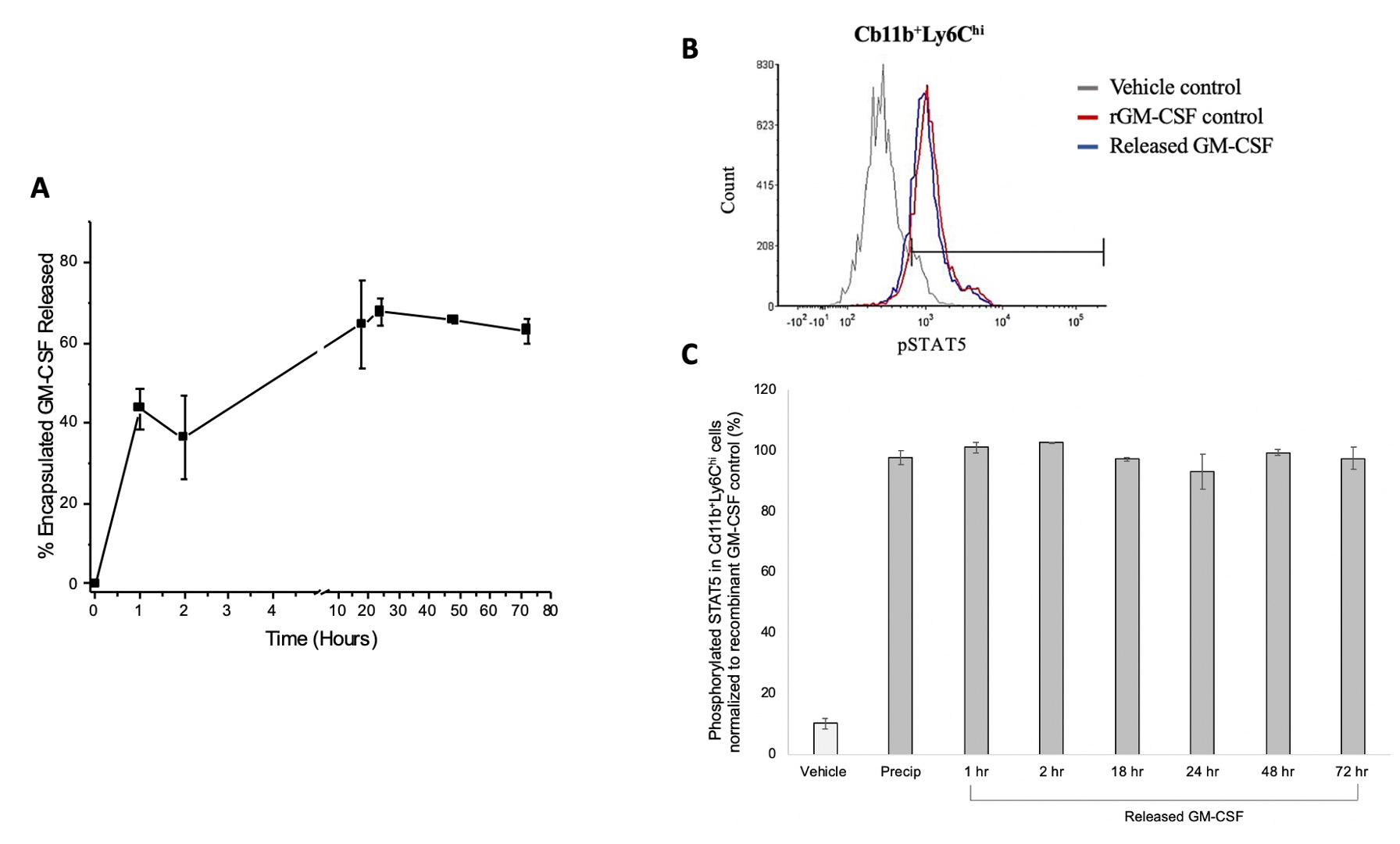