Purpose: Lumefantrine (lum) is an anti-malarial drug which is characterized by low crystalline aqueous solubility (< 80 ng/mL) and high permeability. Therefore, even the currently marketed formulation has low oral bioavailability of 4-11%. In the past, lum amorphous solid dispersions (ASDs) prepared by solvent evaporation have successfully improved lum dissolution [1]. However, solvent evaporation is not a cost-effective method with its requirement of large quantities of organic solvents. Ideally, the manufacturing method needs to be economic to have a wide application in impoverished countries that use this drug extensively for the treatment of malaria. Therefore, the first aim of the study was to improve lum dissolution by formulating lum as ASDs with a simple, low-cost manufacturing method like anti-solvent precipitation.
Moisture is a well-known factor which negatively affects ASD stability. Since anti-solvent precipitation involves usage of aqueous solvents, the second aim was to evaluate if the developed ASDs were physically stable under accelerated storage conditions. When lume ASDs were prepared using solvent evaporation method (with no aqueous solvents), a directly proportional co-relation had been observed between the extent of lum protonation (by polymer) and the ASD stability [1]. Therefore, the last aim was to evaluate if this relationship exists when ASD is exposed to moisture during manufacturing process itself like in anti-solvent precipitation.

Methods: The study investigated four acidic polymers: hydroxypropylmethylcellulose phthalate (HPMCP), hydroxypropylmethylcellulose acetate succinate (HPMCAS), cellulose acetate phthalate (CAP), and Eudragit L100 (EL100) to prepare lum ASDs at a drug:polymer ratio of 4:6. The ASDs were manufactured by anti-solvent precipitation method, wherein an organic solution of the drug and polymer was sprayed by an ultrasonic nozzle into its anti-solvent, acidic water. The precipitate was filtered and dried at room temperature under vacuum.
Dissolution study was performed in phosphate buffer (pH 6.8) at 37°C. The physical stability of the ASDs was studied under accelerated storage conditions of 75% relative humidity (RH) and 40°C for 90 days. The formulations were characterized for crystallinity using powder X-ray diffraction (PXRD) and for moisture content by thermogravimetric analysis (TGA). The glass transition/melting point of the dispersions was investigated using modulated differential scanning calorimetry (DSC). Based on the initial results, additional drug-polymer ratios (2:8 and 3:7) for HPMCP and HPMCAS polymers were similarly characterized. X-ray photoelectron spectroscopy was used to measure the extent of % protonation of lum tertiary nitrogen within the formulated ASD.

Results: The PXRD spectra obtained immediately after the ASDs preparation indicated no crystalline peaks for HPMCP, HPMCAS, and CAP-based ASDs, thus confirming their amorphous form while the EL100 ASD plot showed small peaks indicating onset of crystallization (Figure 1). Hence, EL100 ASD is excluded from further analysis. The stability study (Table 1) indicated HPMCP and HPMCAS to be the most suitable polymers with lum amorphous form being retained for over three months. The higher water content of CAP dispersions after drying (10% w/w as opposed to an average of 4% w/w in other ASDs) and longer drying times of EL100 dispersions (4 days vs < 12 hours for other ASDs) could be a possible reason for the rapid development of crystallinity in these two formulations. The glass transition temperature of ASDs was in general agreement with the PXRD results in terms of identifying the stable dispersions, i.e. all HPMCP based ASDs had highest Tg values (89-110°C), followed by HPMCAS (85-87°C) and CAP (82°C) dispersions.
The 2:8 HPMCP ASD showed highest drug release with a maximum of 208.41 µg/ml, followed by HPMCAS which reached 142.84 µg/ml (Figure 2). In contrast, no drug release was detected for the marketed drug formulation even at 2 hours.
As seen in the XPS results (Table 1), the extent of lumefantrine protonation appears to be directly proportional to polymer loading. However, a direct correlation is not observed between the degree of protonation in lumefantrine and ASD stability. Particularly because both CAP- and EL100-based systems exhibited higher degrees of lumefantrine protonation and poorer stability profiles. However, it is noteworthy that both CAP- and EL100-based systems, also had higher moisture contents or were exposed to moisture for a longer time due to slow drying rates relative to other ASDs.

Conclusion: This study demonstrated that spray anti-solvent precipitation is a viable and economical approach to manufacture amorphous solid dispersions with satisfactory physical stability and drug release. The choice of polymer and drug-polymer ratio played a crucial role in solubility and stability enhancement of lum, with HPMCP at a drug-polymer ratio of 2:8 providing the best stability and dissolution properties. The study also indicated that although a higher degree of drug protonation by polymers may confer greater stability to the ASD, the presence of high moisture content can negatively affect this stability. 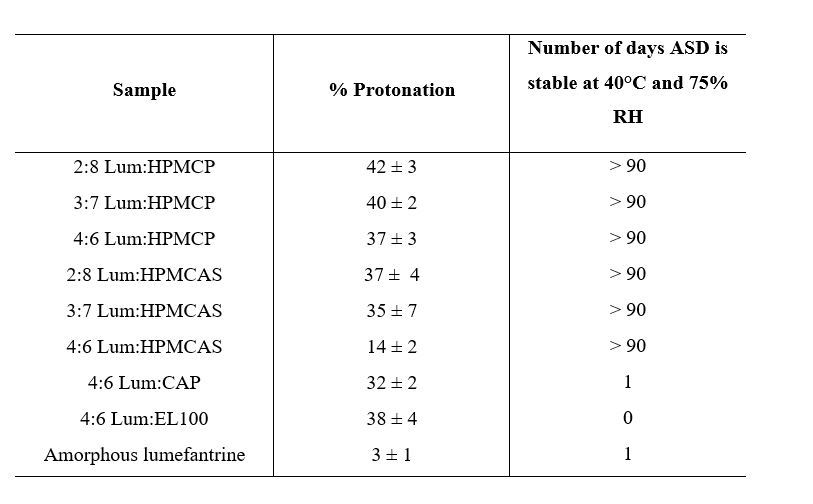 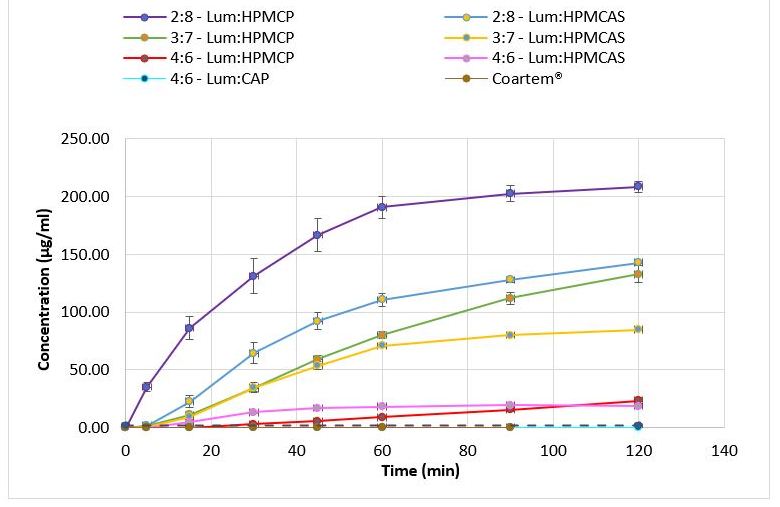 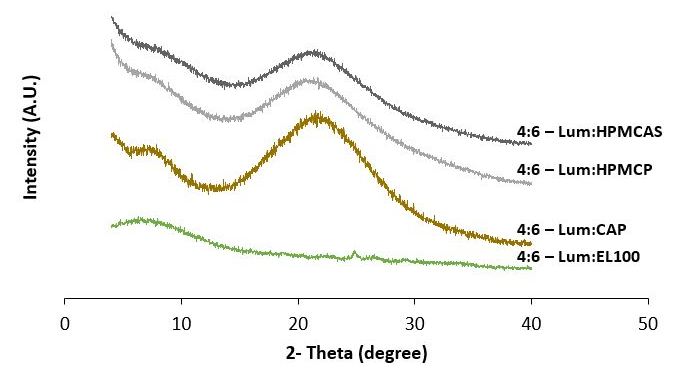