Purpose: The pharmaceutical industry requires a simple nondestructive inspection technique for quality control, where the characteristic properties of the inspection targets are not affected during inspection. Terahertz (THz) transmission spectroscopy has potential as nondestructive identification and quantitative inspection techniques for formulation tablets [1, 2]. This technology is based on the measurement of the vibration of the lattice phonon mode originating in the crystal structure [3] and transmission measurement is enabled by high transmittance of a wide variety of materials including pharmaceutical additives in THz frequency regions. In this work, the potential of our developed frequency-domain (FD) THz spectrometer with principal component analysis (PCA) and quadratic discriminant analysis (DA) method was evaluated for classification of ofloxacin antibiotic formulation tablets.

Methods: Ofloxacin was purchased from Fujifilm Wako Pure Chemical Corporation and THz spectrum of pure ofloxacin absorption spectrum was measured. The sample powders were weighed and pressed into 10 mm diameter tablets at a pressure of 78.5 kN. Their thickness was 1.02 mm.
Nine kinds of ofloxacin tablets commercially available from Japanese pharmaceutical companies (Table 1) were prepared for classification analysis. Their manufactures are Daiichi Sankyo Co. Ltd., Sawai Pharmaceutical Co. Ltd., Ohara Pharmaceutical Co., Ltd., Nihon Generic Co., Ltd., Towa Pharmaceutical Co., Ltd., Tatsumi Kagaku Co., Ltd., Teva Pharmaceutical Industries Ltd., Koa Isei Co., Ltd., and Tsuruhara Pharmaceutical Co., Ltd. Each formulation tablet contained 100 mg of ofloxacin. The tablets except Tablets H and I contained lactose hydrate as an excipient. The composition of Tablet A’s ingredients was similar to that of Tablets B and C. Tablets C, D, and F contained crystalline cellulose or cellulose, and their compositions were similar. Tablets H and I had nearly all the same ingredients. These tablets were filed to obtain the appropriate signal intensity for measurement. Their thickness after filing was about 1.2 mm.
THz absorption spectra were recorded using our FD THz spectrometer [1]. Tunable high-peak-power THz waves were generated with an injection-seeded terahertz parametric generation (is-TPG) technique. The generated THz waves were focused on a sample tablet in a chamber in which the relative humidity was controlled to less than 1%. The transmitted THz waves were upconverted to near infrared light using a nonlinear crystal and detected by a 2D-CMOS sensor at room temperature.

Results: Figure 1 shows the absorption spectrum of the pure ofloxacin. Absorption peaks of ofloxacin appeared clearly at 1.05 and 2.22 THz. Absorption spectra of the commercial pharmaceutical tablets are shown in Fig. 2 (a), and these were the averaged spectra of six tablets of each kind (five tablets for Tablet I). Absorption peaks of ofloxacin appeared at 1.05 and 2.22 THz in all spectra. Tablets A-G also had absorption peaks due to lactose being apparent at 1.20, 1.38, and 1.82 THz, which agreed with those of existing literature [4]. The intensities of the lactose peaks are expected to be dependent on the difference in quantity of lactose in each kind of tablet. The base line of spectra of Tablets H and I were offset compared with Tablets A-G, which was presumed to be affected by other additives and scattering inside the tablets. The second derivative was performed on the spectra (Fig2. (b)), in order to eliminate the influence of scattering inside the tablets and to visualize the absorption peaks. PCA and quadratic DA method were applied for the second derivate THz spectra using The Unscrambler X Ver.10.5 (Camo Software, Norway). The first principal component (53% of the variation) was mostly based on variation in the lactose absorption peak. The second (24% of the variation) and third (8% of the variation) principal components were considered to be based on variation in the absorption peaks of ofloxacin and other additives, respectively. Using quadratic DA with these three principal components, the formulation tablets were successfully classified with an accuracy of 98.1% (Fig.2 (c)). 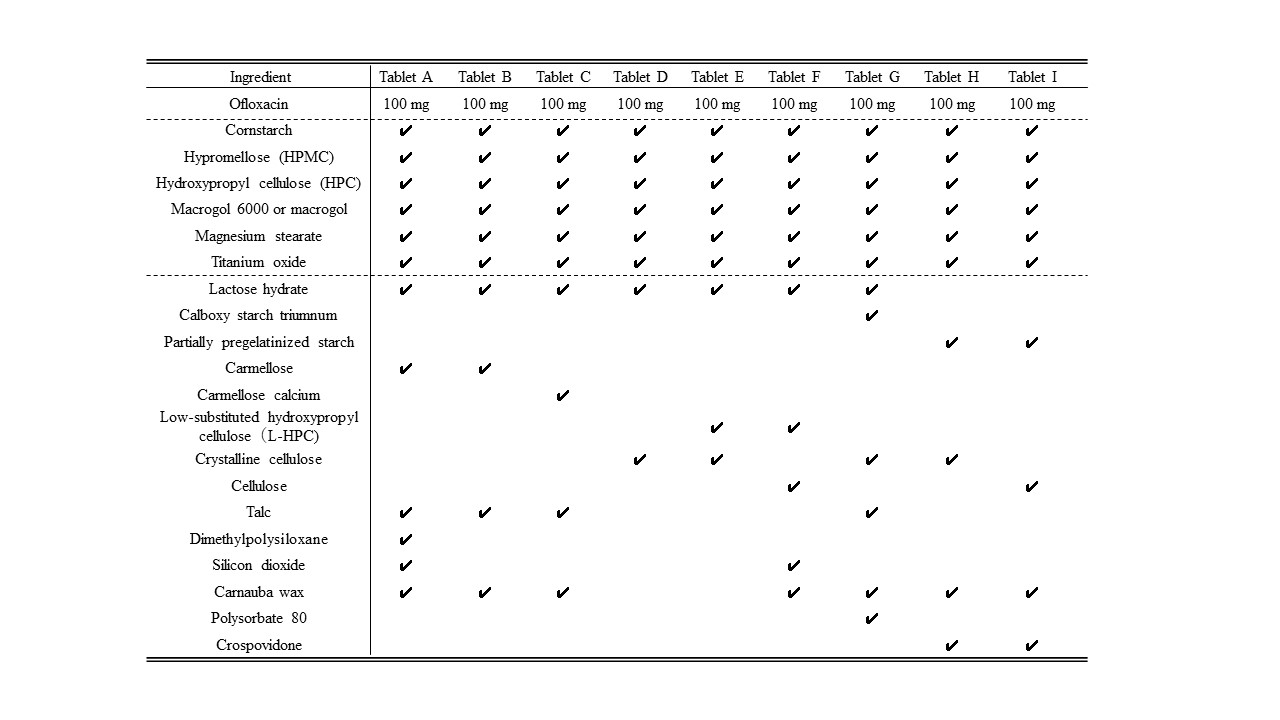 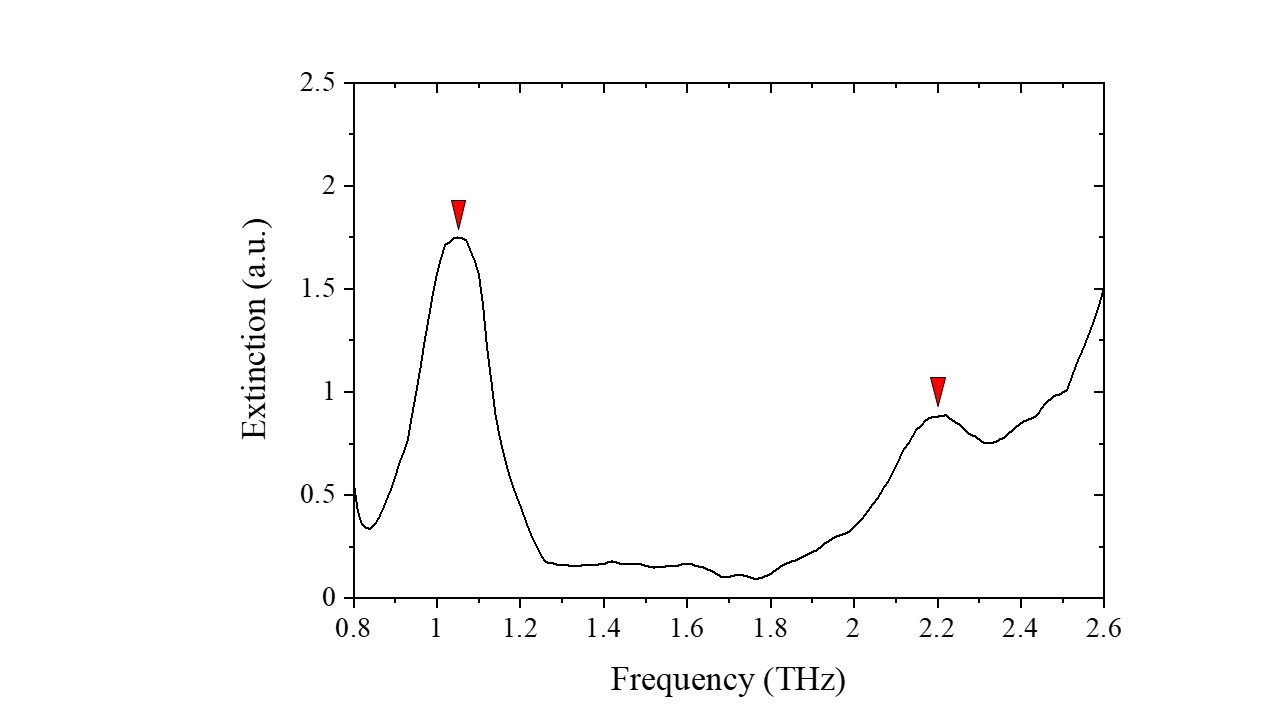 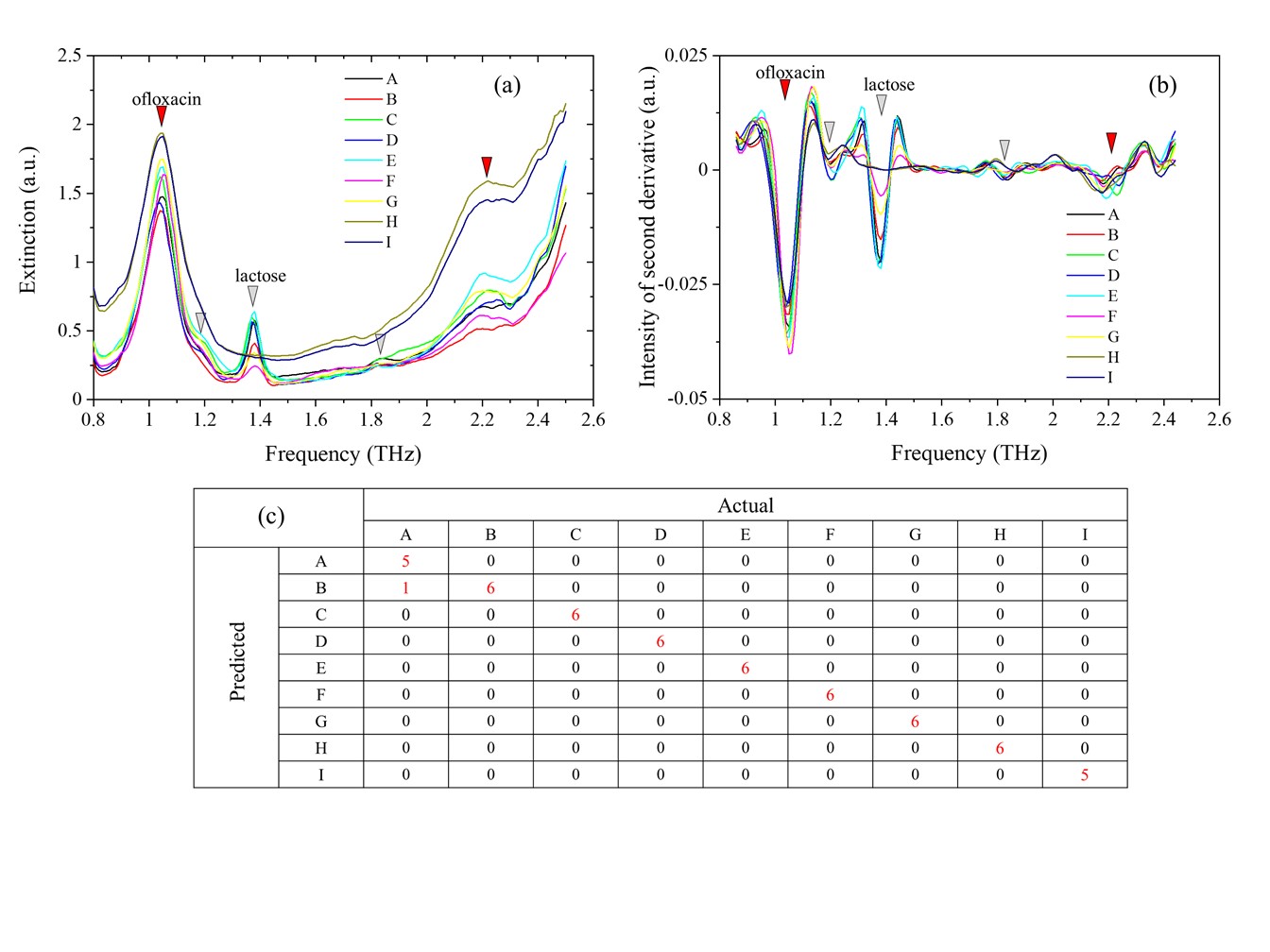