Crystalline Sponges as a Sensitive and Tast Method for Metabolite Identification: Application to In Vitro Metabolites

Purpose: Understanding the metabolism of new drug candidates, human in vitro systems are used in early drug discovery to investigate human relevant metabolism and hence efficacy and safety aspects. The complete structural elucidation of metabolites, only available in small quantity from incubation (ng range), is limited by conventional technologies. Although MS techniques have reached extreme sensitivity, these techniques fail in many situations, e.g., to identify the complete structure of metabolites. This forces scientists to use NMR, a less sensitive technique, requiring larger amounts of material (usually μg to mg range), which is therefore not always suitable for analyzing samples from in vitro origin. A new approach, commonly known as “crystalline sponge method”1, enables structure determination at atomic level without the need of crystallization and only ng amount of analytes using conventional single crystal X-ray crystallography. Previous studies2 show that when optimal soaking is possible, crystalline sponges technology is a sensitive (ng amount) and fast (few days) method.

Methods: Gemfibrozil (20 µM) was incubated in potassium phosphate buffer with rat liver microsomes (0.5 mg/mL) and NADPH as cofactor for 3 hours to generate phase I metabolites. After terminating the reaction with cold acetonitrile and centrifugation, the metabolites were separated and purified using high performance liquid chromatography (Acquity Arc HPLC, Waters Corporation) with UV and MS detection (negative ion mode) in combination with a fraction collector. Fractions with the desired molecules were pooled and evaporated to dryness. The analyte material was prepared for guest soaking by adding one crystalline sponge ([(ZnCl2)3(tpt)2∙(cyclohexane)x]n) together with 50 µl of cyclohexane and 4 µL 1,2-dimethoxyethane to the sample vial. After 1 day incubation at 50 °C for slow evaporation of solvent, the crystal was measured via X-ray diffraction (Rigaku Oxford Diffraction XtaLAB Synergy-R diffractometer (Cu-Kα)) equipped with a HyPix-6000HE/HyPix-Arc 150° Hybrid Photon Counting (HPC) detector at 100 K and the structure model of framework and analyte determined using the software OLEX23, with SHELXT for solution and SHELXL4 for structure refinement. Hydrogen atoms were fixed using the riding model. The data quality was assessed by Rint (measurement) and quality of the fit by R1 (refined model) values.

Results: LC-MS analysis of incubated gemfibrozil (m/z 249) showed the formation of metabolite M1 at a deprotonated molecular mass [M–H]– of m/z 265. The increase of the m/z value of 16 Da suggested the addition of one oxygen to the molecular structure but giving no information about the exact position.
The crystal structure of the parent compound gemfibrozil revealed two molecules with occupancies of 100% (R1= 11.25%; Rint 1.81%). The crystallographic analysis of the metabolite M1 exhibits relatively high electron density at one of the methylcarbon atoms of the 2',5'-dimethylphenoxy moiety, revealing the exact position of hydroxylation. Two analyte molecules and one cyclohexane were assigned with occupancies of 100% (R1= 7.58%; Rint 2.18%) (Figure 1). π-π stacking interactions could be observed between the aromatic ring of M1 and the framework [distance 3.63 Å, angle 5.83 °]. The refined structures of gemfibrozil and M1 are shown in Figure 2.

Conclusion: In summary, our work shows that the combination of the crystalline sponge method with MS data can provide information of the complete structure of metabolites generated in low amount from in vitro incubations. MS data provided us information on the type of metabolism but is limited to pinpoint the exact position of hydroxylation. Only the crystallographic data revealed that hydroxylation occurred at the 5'-CH3 positions of the aromatic ring.
The application of the crystalline sponge method for metabolites offers a great opportunity for scientists in drug metabolism and pharmacokinetics to investigate human relevant metabolism at early stages in drug discovery and development where other analytical techniques are limited by their ability to provide information of the complete structure (LC-MS) or the necessary amount of material (NMR). 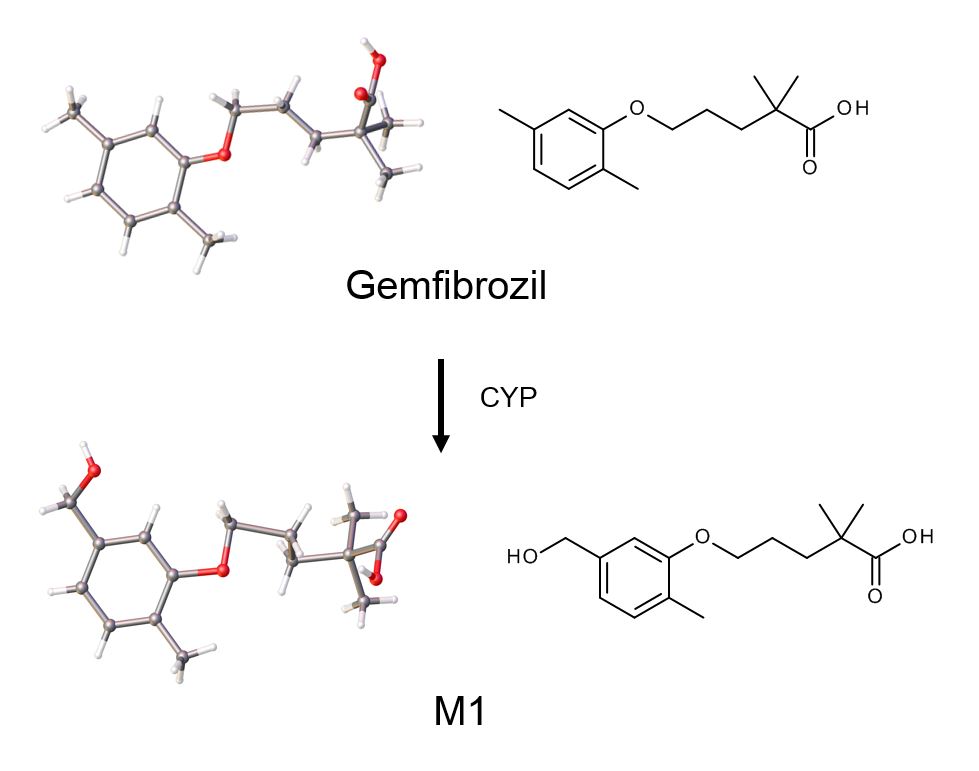 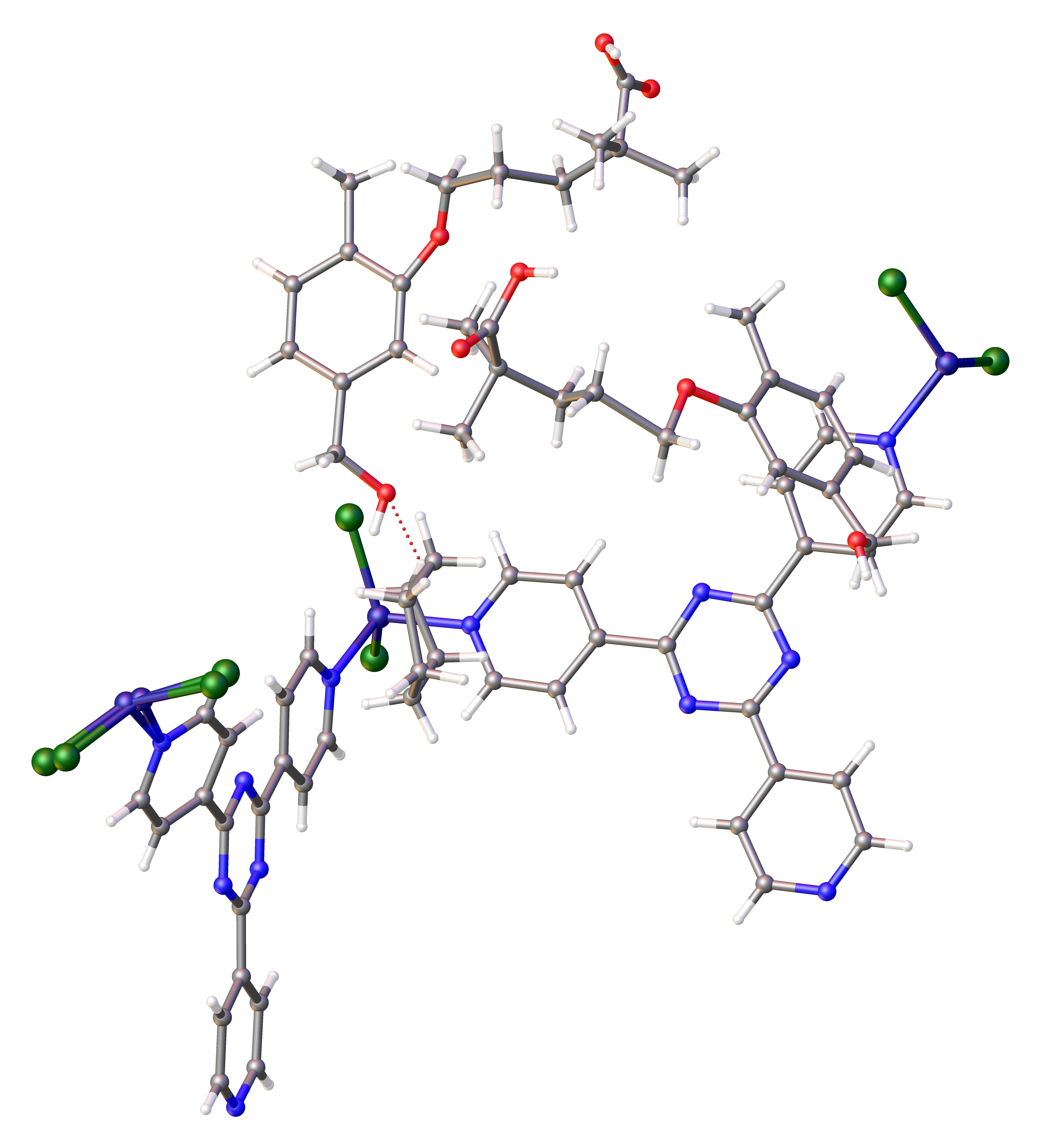