Is Derivatization Necessary for the Gas Chromatographic Analysis Performed in Extractable/Leachable Screening Studies?

Purpose: Extractable/Leachable screening studies are performed as a first step in the characterization of substances that can be extracted (extractables) or leached (leachables) from various materials or into the drug, respectively, during the manufacture, storage, and/or delivery of a pharmaceutical product.  These studies must be designed so that they can qualitatively and quantitatively analyze a wide range of substances that may be present.  To achieve this, it is an established practice to utilize a range of analytical methodologies, such as HS/GC/MS, GC/MS, LC/MS, and ICP/MS, to adequately analyze the potential diverse range of compounds that may be encountered in such studies. However, the design of the analytical methodologies themselves can have a critical impact on the thoroughness of the data produced.  One such issue is associated with the analysis of compounds with active hydrogen atoms, such as carboxylic acids, alcohols, and amines, which can be difficult to analyze by GC/MS.  This difficulty is due to the ability of these functionalities to form hydrogen bonds with the surfaces of the gas chromatograph, resulting in poor response, poor peak shape, and carryover.  This difficulty can be remedied by replacing these active hydrogen atoms with another functionality via derivatization.  The resulting derivatized analog produces significantly better chromatography and sensitivity than the original molecule, thus allowing for it to be readily analyzed by GC/MS. The purpose of the study summarized in this poster was to determine if derivatization is required for these substances, and if so, report procedures and reagents that work well for the derivatization of samples analyzed in E/L studies.  An assessment of the benefits of derivatization as compared to not performing derivatization and confirm that derivatization is required for these compounds as opposed to other approaches, such as the ability of other analytical platforms to cover these compounds.

Methods: A GC/MS system with an HP-35 column was used to perform the separation and analysis, respectively, of the derivatized and un-derivatized samples.  Derivatization was performed using two reagents, BSTFA/TMCS for alcohols/hydroxyls and acids MBTFA for amines, based on their abilities to adequately and quickly derivatize these functionalities. HS/GC/MS and LC/MS was performed to assess the cross-method coverage of these compounds and determine if they could be adequately analyzed on these platforms, thus alleviating the need to analyze them by derivatization GC/MS.  HS/GC/MS analysis was performed using a DB-624 column on a single quadrupole system while LC/MS was performed using a C8 column on a UPLC/QTOF-MS system.

Results: Table 1 presents the data obtained for the analysis of the various compounds with labile hydrogens by GC/MS.  As can be seen, the derivatized compounds produced a significantly better response, as illustrated by the estimated QL, when compared to the non-derivatized preparation, if detected at all in the non-derivatized form.  Furthermore, the response was more linear, and the peaks chromatographed better (tailing, plate counts). The data obtained from the analysis of the compounds by HS/GC/MS and UPLC/QTOF-MS showed that a small number of these compounds could be adequately analyzed by one of these platforms.  For example, most of the primary and secondary amines produced comparable, if not slightly better, QL values in the UPLC/QTOF-MS analysis than by derivatization GC/MS.  Otherwise, the majority of these compounds either produced much lower QL values in these methods or were not detected at all.

Conclusion: The results of this study have shown that including a derivatization procedure in the analysis of E/L samples by gas chromatography is critical for the attainment of a characteristic extractable and/or leachable profile. While some of these compounds could be analyzed in their non-derivatized form by GC or one of the other methods typically included in an E/L screening study, most would not be adequately characterized.  Since many of these compounds are relatively hydrophilic, and thus more likely to leach into aqueous drug product, their omission from the dataset generated in an E/L screening study by not including derivatization could result in a critical data gap in the ensuing risk assessment. 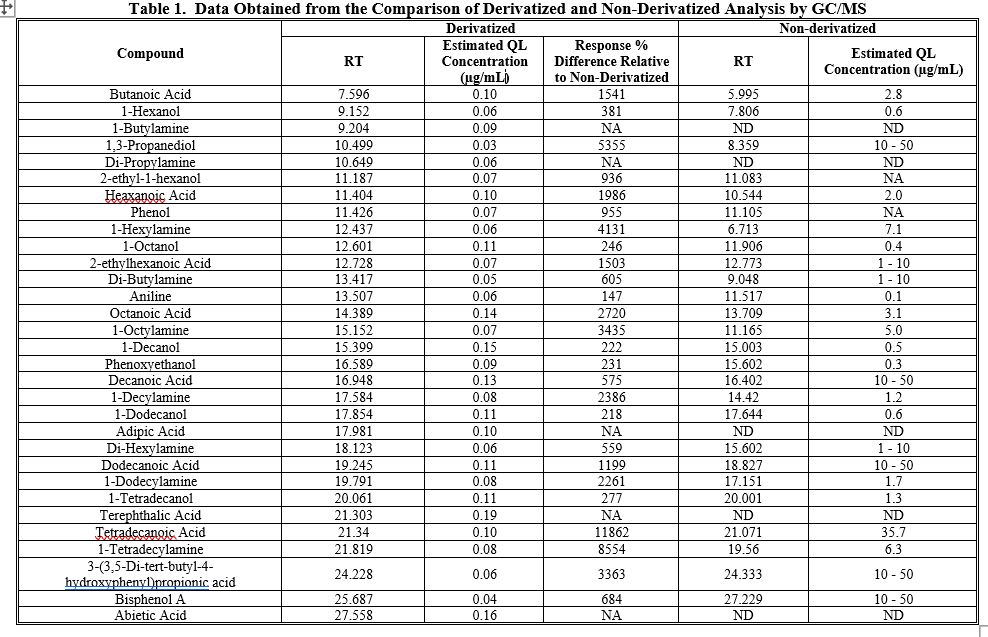