Purpose: Hydroxypropyl cellulose (HPC) can be an unexpected candidate for certain applications such as amorphous solid dispersions - it can be used as a solubility enhancer for poorly soluble drugs, acting as an efficient solubilizing agent. However, the best results were obtained only for low molecular-weight (Mw) HPC grades with a short-chain structure1-2. Standard 1H-NMR spectra show the proton spin-spin coupling due to chemical bonds, whereas nuclear Overhauser effect (NOE) occurs through the space when the distance between two protons is less than 4.9 Å. Thus, to obtain meaningful insights on the HPC behavior in aqueous and organic solutions and the effect of molecular weight at the molecular and supramolecular levels, NOESY (Nuclear Overhauser Effect Spectroscopy) in various solvents (DMSO-d6, DMF-d7 and D2O) was employed3.

Methods: Hydroxypropyl cellulose (HPC) with average molecular weight of 140,000 (HPC-L), 100,000 (HPC-SL), 40,000 (HPC-SSL) and 20,000 (HPC-UL) were provided by Nippon Soda, Japan. Deuterated dimethyl sulfoxide (DMSO-d6, 99.9% D) and deuterated dimethyl formamide (DMF-d7, 99.5 % D) are purchased from FUJIFILM Wako Pure Chemical Corporation, Japan. Deuterium oxide (D2O, 99.8 % D) is purchased from Tokyo Chemical Industry, Japan. For DMSO-d6 and DMF-d7, in order to avoid the OH groups exchange with residual H2O, the samples are prepared as follows: a. preliminary weighted amount of HPC was dried at 45 °C overnight, then placed in a desiccator over CaCl2 for 30 min under vacuum; b. the sample is then dissolved in the deuterated solvent (0.5 %) at room temperature under nitrogen atmosphere. For deuterated water (D2O), where the residual H2O doesn’t play an important role, the sample preparation involves weighting and preparing of a 0.5 % solution. Bruker Biospin AVANCE III HD 500 Onebay is used for the measurements: mixing time 0.3 s; number of scans 8. Tetramethyl silane (Me4Si) is used as an internal standard.

Results: The HPC grade with the highest molecular weight (L) showed multiple strong proton cross-relaxations between the different functional groups. The strongest were those between the protons of CH, CH2 (Figure 1). An interaction between C1 protons from the cellulose moiety and CH3 groups was also observed. This speaks for close distance between the propoxyl groups and cellulose skeleton in solution. The low molecular weight grades of HPC revealed the same interactions as did their high Mw counterparts, however with decreased intensity, proportional to the decrease of their molecular weight (example HPC-L vs. HPC-UL, Figure 2). Moreover, in aqueous solutions, the observed differences in the intensity of the CH3-CH3 interactions at 1.1 ppm confirmed the well-known experimentally measured differences in the cloud point of the different HPC grades. A stronger CH3-CH3 interaction with increase of the HPC molecular weight corresponds to a decrease of the measured cloud point. 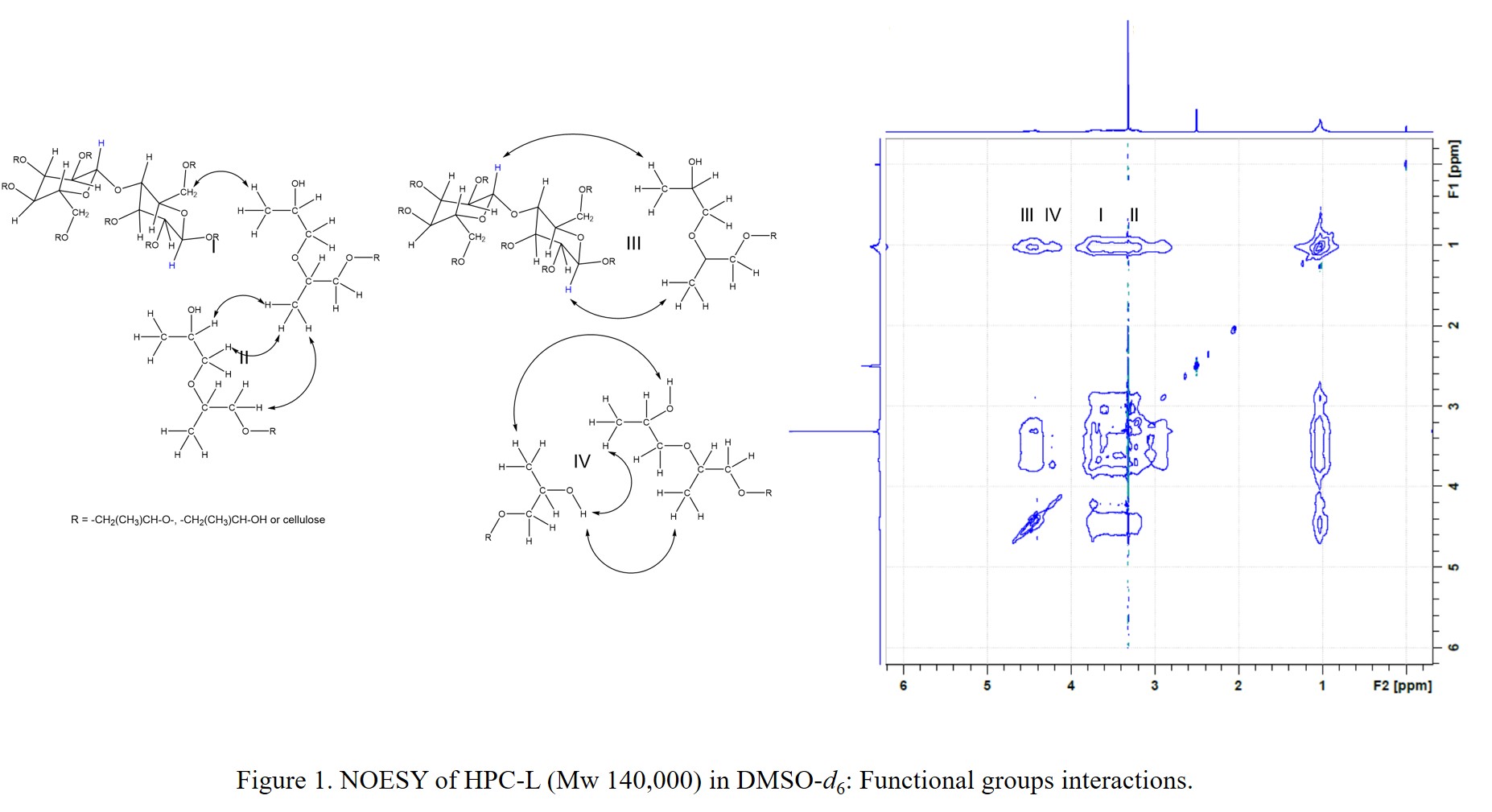 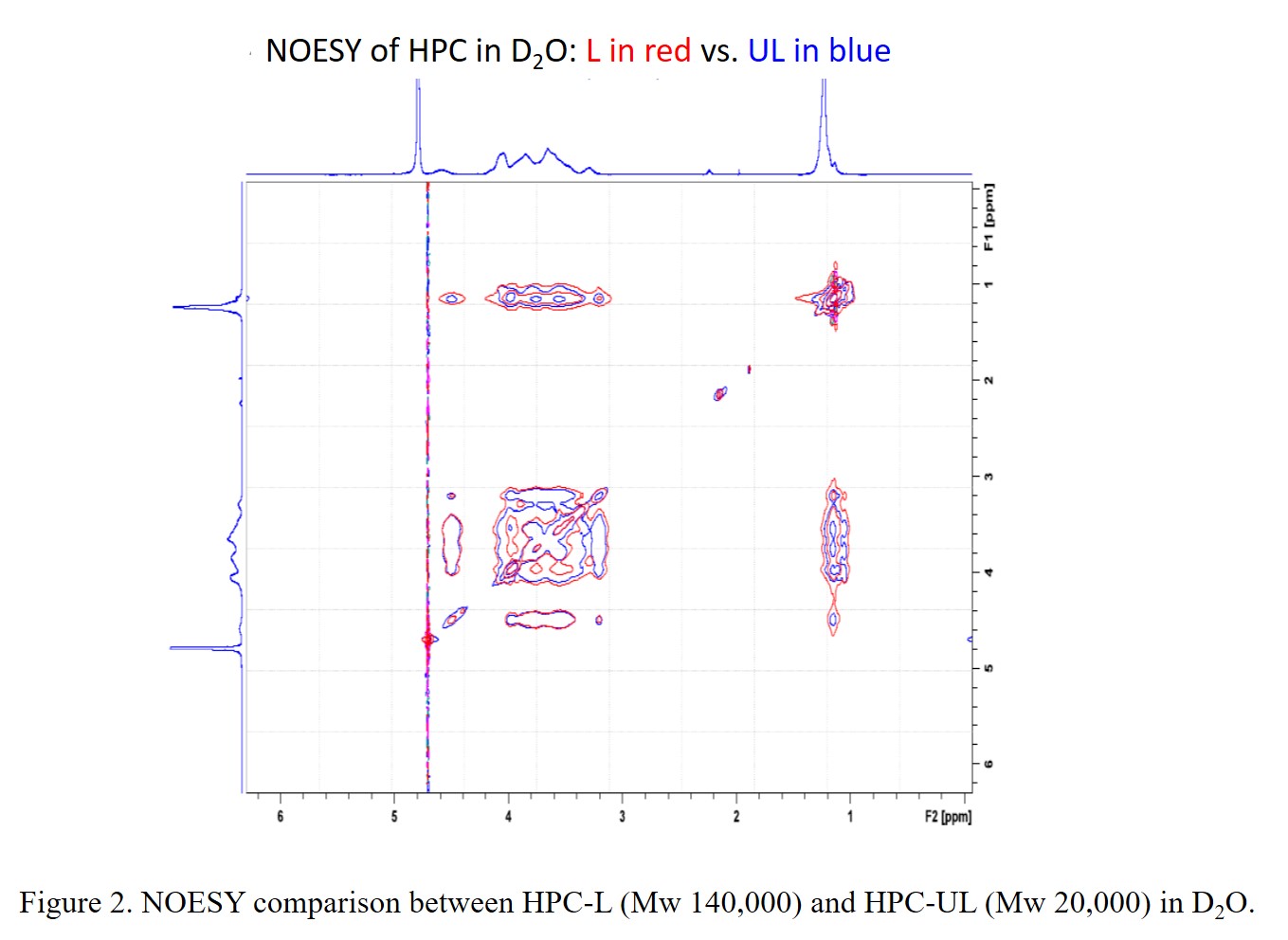