Purpose: To better understand the role excipients in stabilizing secondary structure of biologic compounds to help optimize their formulation process. To this end, the thermodynamic effects excipients had on model poly-l-lysine helix systems were evaluated and quantified. Through better understanding the behavior of these protective agents in an isolated system, we hope to improve our understanding of their behavior in larger systems.

Methods: Sample Preparation: All PLL purchased from Alamanda Polymers ( >95% purity) were diluted to a concentration of 150 mM with or without 0.25M of excipient, mannitol.  pH of the solutions were adjusted to pH of 11.5 for all solutions.
Experimental Design: Four systems were set up to evaluate thermodynamic effects of excipients on model peptide PLL. They are: system A, PLL-water; system B, PLL-water-urea; system C PLL-water-excipient; system D, PLL-water-urea-excipient. All systems were subject to thermal and/or chemical challenge.
CD Analysis: CD-UV analysis was carried out using a Jaso-810 CD spectrometer with an attached Peltier and 0.1 cm quartz cuvette. CD spectra were recorded in triplicate with a scan rate of 100nm/min, 1mm slit width with excipient/buffer solutions as blanks. HT values did not exceed 600 V for recorded data. Full scan spectra were acquired from 200-260 nm at 20°C. Thermal denaturation was carried by ramping the temperature from 20°C to 50°C at a rate of 0.5°C/min.
Data analysis: Percentage of fractional helicity (fH) was calculated according to the following equation:  where θexp is the recorded molar ellipticity (MRE) in deg cm2dmol at 222 nm, θu is the theoretical max MRE of a coiled peptide, θh is the theoretical max MRE of 100% helix peptide and estimated through the relationship:  where x (2.5) and n is the number of residues (20)10, 11. MRE θ222 values over temperature were used to monitor helicity change and quantify helix stabilization using both two and multi-state models with the following equations:

Results: For system A, without mannitol, a fH of approximately 27% was observed. Application of a thermal gradient revealed a transition temperature (TM) of 232K, ΔGοfolding -5.35 kcal/mol. System B with changing urea and/or thermal gradients produced linear changes in ΔG and TM yielding an m-value of -0.224 kcal/mol/M and ΔCP of 18.3 cal/mol (Table 1 and Fgure 1).
From systems C and D (with mannitol), it was observed mannitol more than doubled fH to over 55% (rt) for both the observed and predicted ZB model. Thermal challenges yielded nearly linear changes in fH. In the absence of urea, a peptide folding
Overall, mannitol induced fH of PLL relative to peptide-no-excipient systems with and without urea (data summarized in table 3). In the absence of urea, helicity was induced over 100% relative to non-mannitol systems. Similarly, the magnitude changes in ΔG, ΔH, ΔS, of peptide folding, were 17.6%, 47.1%, 11.7%, respectively. While TM, and ΔCP were 31.7 and 28.1%, respectively. The greatest relative difference in helical induction systems A-B and C-D occurred at 0M Urea an d the least at 1M urea. From the data, it appears mannitol has a limited ability to induce, and stabilize helicity of PLL at higher urea concentrations. Overall, multistate ZB models predicted fH matched observed data except for the PLL-water-urea system at 0.5M urea and the PLL-water-mannitol system at 1M urea (figures 1 and 2).

Conclusion: Mannitol as an excipient significantly altered the thermodynamic properties relative to non-mannitol PLL systems by inducing helicity, increasing TM as well as lowering the free energy of coil to helix folding. An increase in molar heat capacity ΔCP was also observed, indicating an increase of peptide hydration and greater hydrogen backbone bonding. From the data gathered, the effects of the mannitol excipient on helicity induction is obtained, and it’s ability to induce and maintain the helical nature of PLL under thermal and chemical challenges was noted. Quantifying these effects for isolated helices allows for a better understanding of how they may behave towards similar features in large protein structure. With this better understanding, optimization of biologic formulations can be improved. 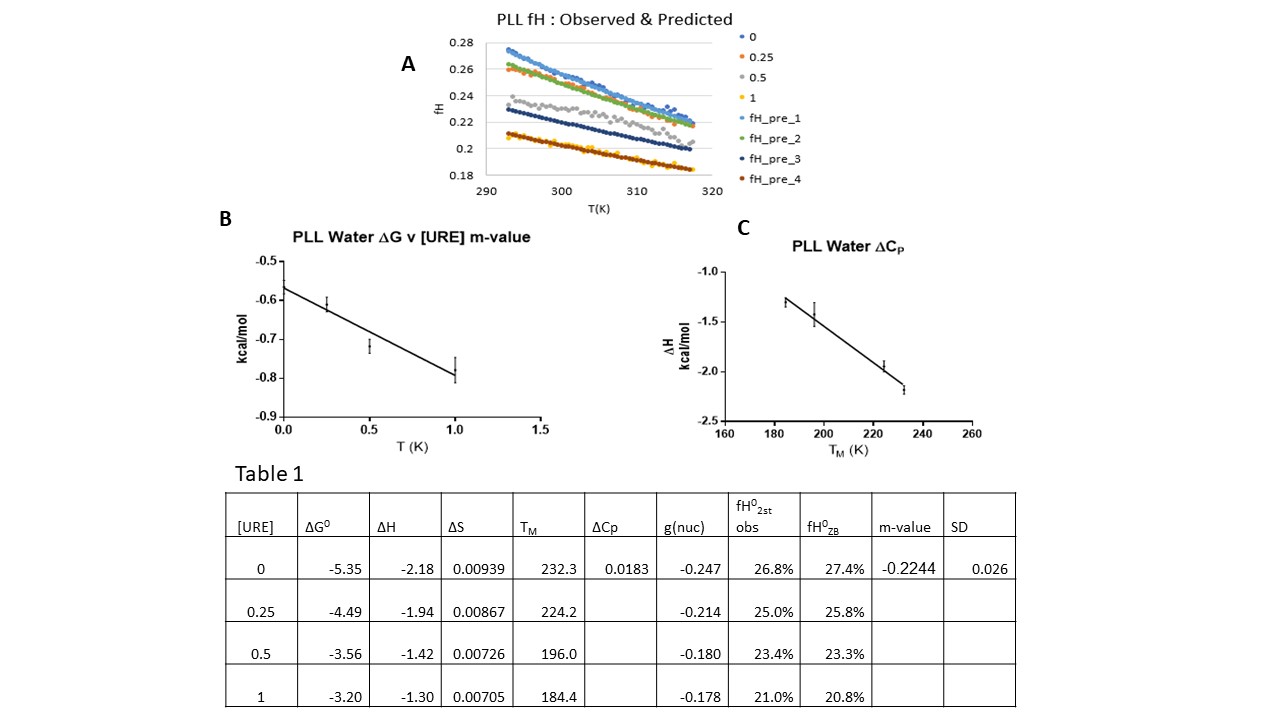 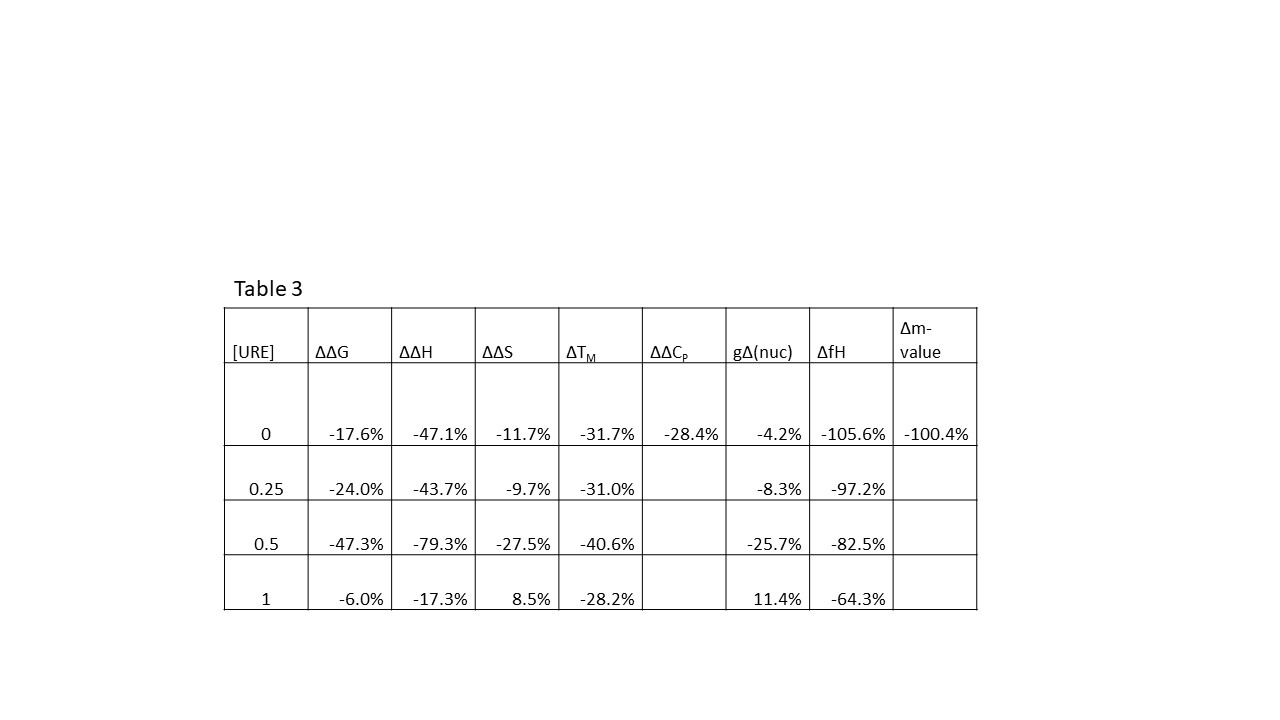 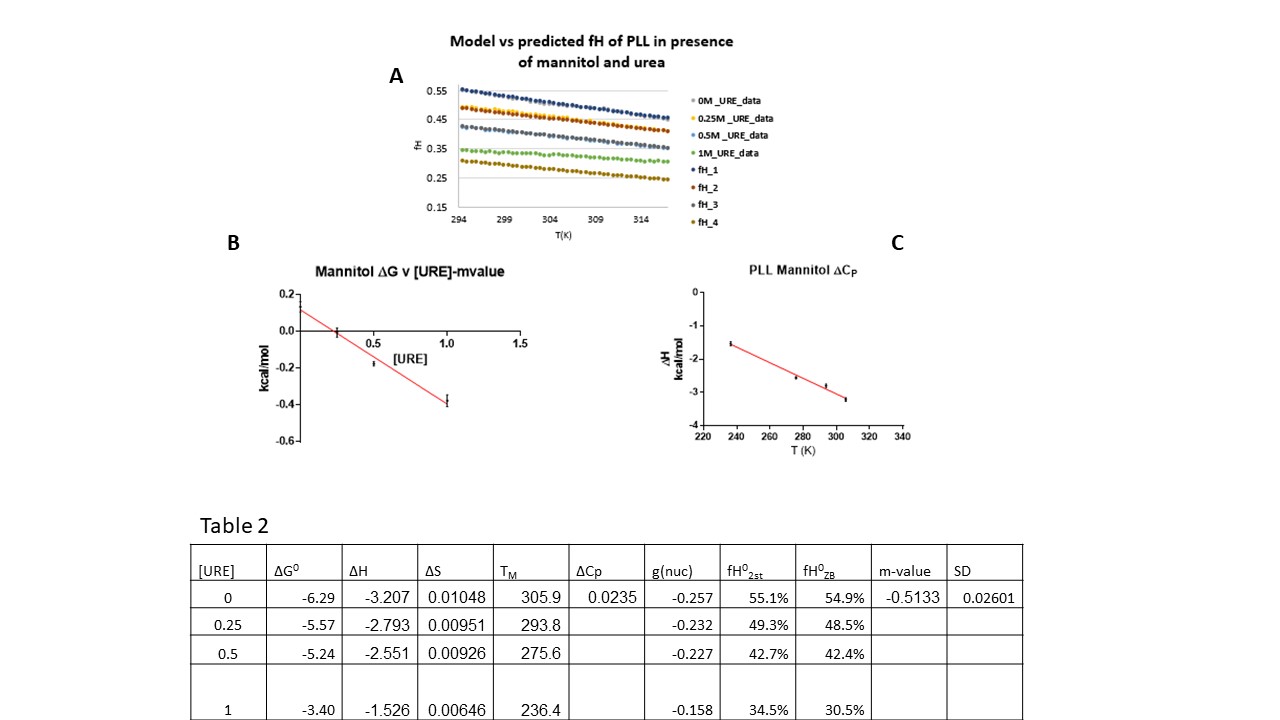