Purpose: Polymeric nanoparticles are a potential strategy to re-vitalize traditional chemotherapeutic drugs; reducing systemic toxicity and increasing local concentrations in tumours. Polymer nanostructures are advantageous over lipid particles due to greater physical resilience and reduced non-specific leakage of drug. A triggering mechanism to allow drug to escape in the desired locality is therefore required. Hydrogen sulfide (H2S) is a gaseous transmitter that is reported to have increased expression in some cancers[1]. Utilising the specific reduction of azide (N3) moieties by H2S is a recent avenue for stimulated release of drug from nanocarriers[2]. This study investigates formulation of bicontinuous nanospheres (BCN) from aryl-azide containing block-co-polymers for encapsulation and release of model drug in response to H2S.

Methods: Polymer synthesis was achieved via ARGET ATRP using a methyl-PEG (mPEG) macroinitiator and synthesized 2-azidobenzyl carbamate monomer (ABOC). Polymers were analysed via NMR, FTIR and GPC. Polymers were formulated into particles via nanoprecipitation before characterization via DLS, cryo-EM and EM-tomography. Particle response to H2S was determined via exposure of nanoparticles to hydrogen sulfide generated in-situ from sodium hydrosulfide in PBS (5 mM), with response confirmed via FTIR, 1H NMR and DLS. Particle loading was attained by incorporating Nile red into the organic solvent prior to nanoprecipitation, with unencapsulated drug removed via size exclusion chromatography. Release of Nile red was examined in PBS and sodium hydrosulfide solution with detection via fluorescence.

Results: A series of mPEG-pABOC polymers were synthesized with Mn (1H NMR) 5476 Da to 10013 Da and a narrow distribution, PD 1.16 – 1.41. Self-assembly of these polymers resulted in spherical particles of 155 – 180 nm with a narrow PDI. Cryo-EM imaging showed a complex morphology with apparent irregular internal bilayers surrounding internal pores. These particles appear morphologically similar to reported BCNs[3], with SAXS analysis showing disordered internal structure. All polymers from the polymer series, irrespective of molecular weight fractions, self-assembled into these complex particles. When exposed to H2S particles show a reduction in DLS particle count of over 90% coupled with loss of the strong azide peak at 2100 cm-1 on FTIR while 1H NMR showed loss of aromatic and benzylic protons from the polymer backbone. This suggests reduction of the azide and subsequent self-immolation leading to generation of a free amine changing the nature of the bilayer, leading to disaggregation of the structure.
Hydrophobic drugs were encapsulated in these particles, with an encapsulation efficiency of 68% for Nile red and 15% for paclitaxel. No encapsulation of hydrophilic drug was seen, which may be due to the internal aqueous pores being connected with the exterior environment.
Release of hydrophobic drug was rapid in both hydrogen sulfide and PBS, with 50% of the encapsulated drug released by 3 hrs. In PBS, particles released 90 % of drug by 24hrs, while in the presence of the hydrogen sulfide 100% was released by 12 hrs.

Conclusion: A series of aryl azide containing polymers were synthesized that self-assemble into bicontinuous nanospheres. These particles respond rapidly to hydrogen sulfide and disassemble. 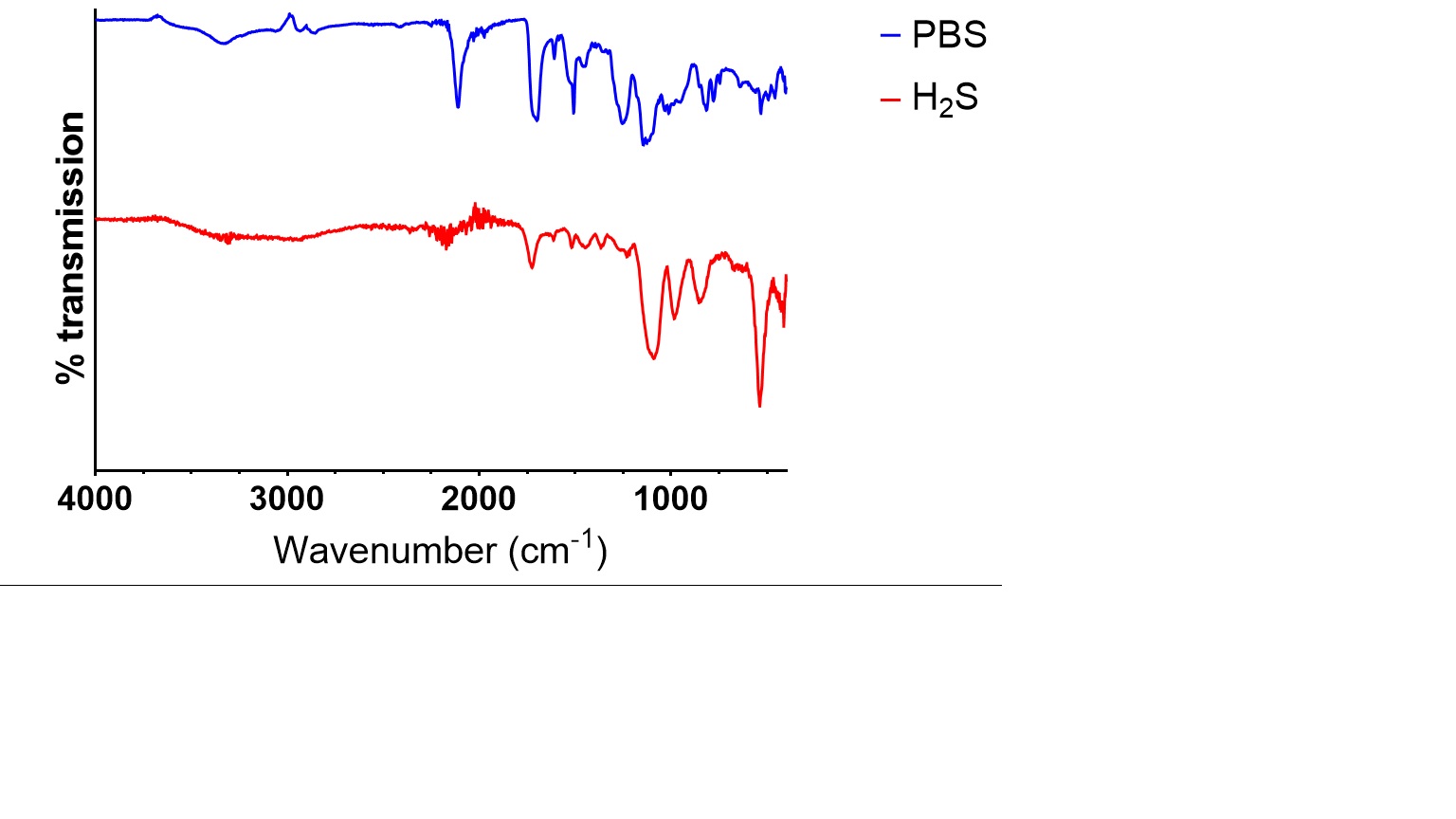 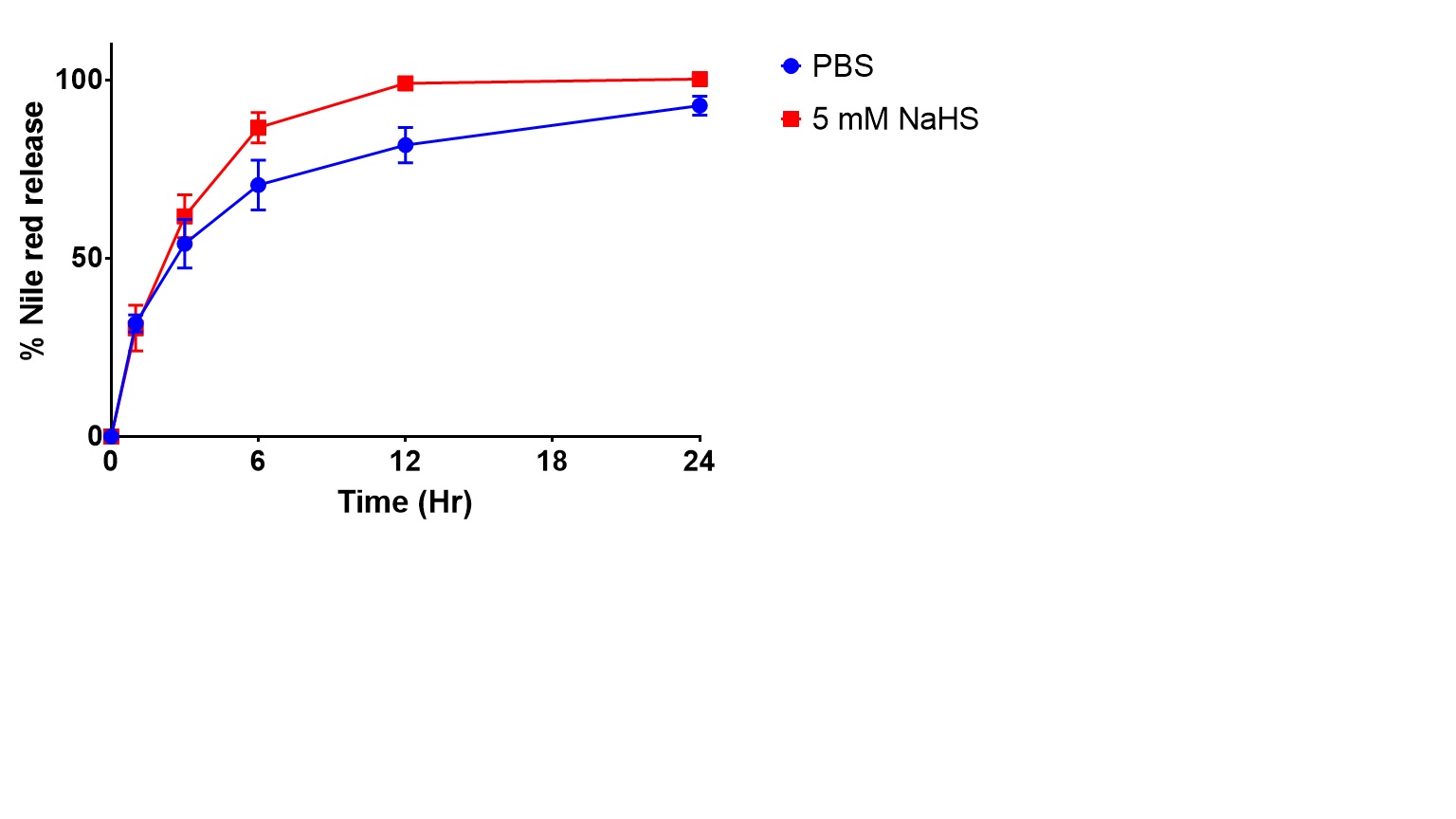