Purpose: The delivery of insulin remains as invasive dosage forms, and a powder inhalation (Afrezza®) which causes potential side effects such as decline in lung function and cough. Therefore, it is imperative to develop a safe and effective non-invasive delivery of insulin. Among non-invasive routes, intranasal (i.n.) route shows a great potential for insulin delivery such as abundant vasculature and low enzymatic degradation. Literature review shows that > 50% of research articles have used the permeation enhancers to improve bioavailability (BA) of i.n. insulin. But many enhancers can cause damage to the nasal mucosa. Self-emulsified nanoemulsion (SEN) has been reported for its safety and efficacy to enhance BA of many drugs. But there is only one publication on SEN to deliver insulin by i.n. route reported by Sintov et al. (2010), showing a relative BA of 21.5% from a w/o SEN consisted of 20% of water and 80% of other excipients including surfactants, etc. Such high percentage of the lipid phase may cause several problems after nasal delivery. Therefore, the objective of this study was to develop an o/w SEN which was suitable for i.n. delivery and enhanced BA of insulin.

Methods: The preconcentrate of SEN consisted of C8 triglycerides, C8/10 Mono/diglyceride, and PEG-40 hydrogenated castor oil at 1:1:2 weight ratio. This preconcentrate was diluted 5, 10, and 20-time with phosphate buffer saline (PBS) containing different concentrations of human insulin (HI) to prepare SENs containing 20%, 10% and 5% of the preconcentrate with the same concentration of insulin (20SEN, 10SEN, and 5SEN, respectively). The droplet size of the SENs was measured. The excised bovine nasal tissue was used for the nasociliotoxicity and ex vivo transport study of insulin in the SENs. In vivo pharmacokinetic and pharmacodynamic studies of the SENs on i.n. delivery of insulin were performed on streptozotocin-induced diabetic rats. The rats were anesthetized by isoflurane, and treated with subcutaneous (s.c.) injection of HI solution (1 IU/kg, 500 µL), or i.n. administration of various formulations (3 IU/kg, 50 µL): 1% sodium lauryl sulfate (SLS, positive control), 20SEN, 10SEN, 5SEN, HI solution, and PBS (negative control). Blood samples were collected along four hours and analyzed for blood glucose level by a glucose meter and HI concentration in plasma by ELISA. It was found that the i.n. delivery of PBS and HI solution stimulated the increase of blood glucose, which was also observed in some previous publications (Illum et al., 1989; Khafagy et al., 2009). Therefore, the increase in blood glucose by i.n. PBS was taken into consideration when the area above the curve (AAC; pharmacodynamic availability) was calculated for the other i.n. groups.

Conclusion: SEN could significantly enhance the insulin absorption through intranasal delivery, which was dependent on the concentration of the preconcentrate in the SEN. 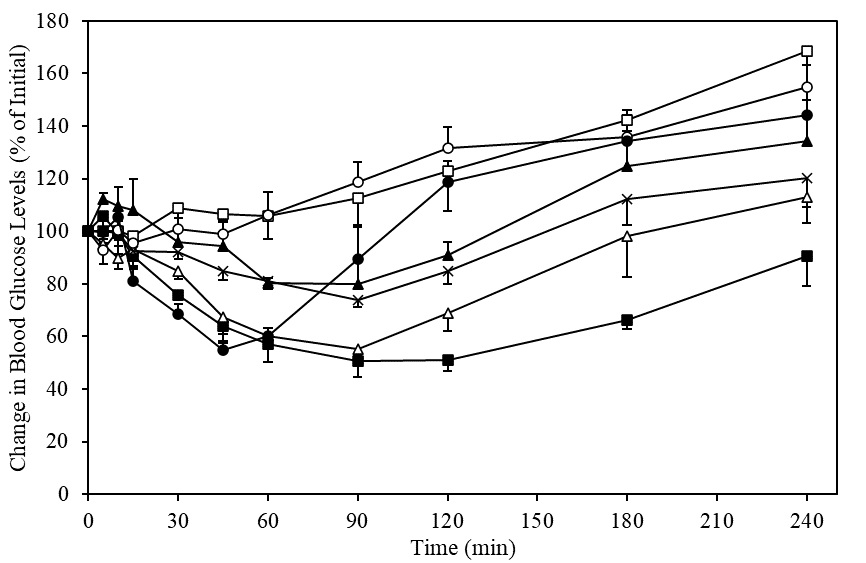 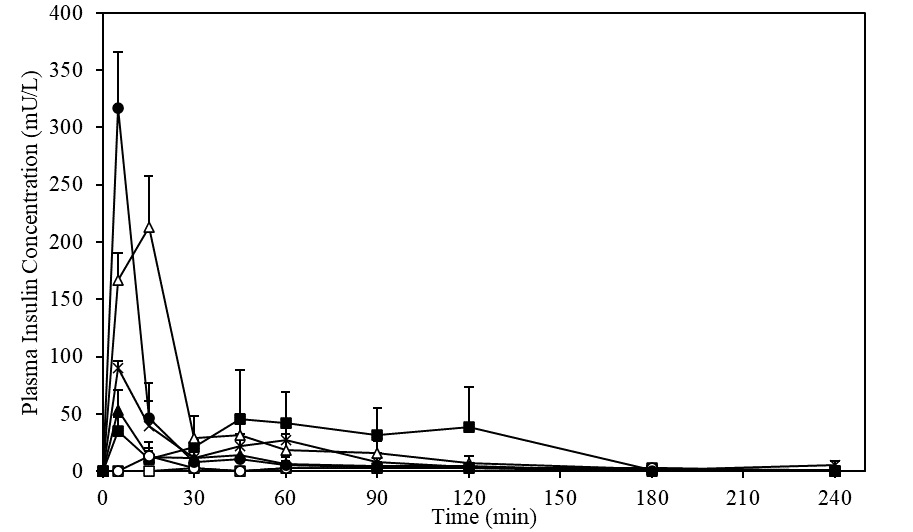