Track: Formulation and Delivery - Chemical - Drug Delivery - Other Routes of Administration - Other

Methods: Nasal vestibule and nasal cavity deposition fractions following nasal insufflation of finely (between 106 – 500 µm) and coarsely (between 500 – 1000 µm) milled powder were predicted using a three-dimensional CFD model based on methods established in Walenga et al.,1 using the commercial software package ANSYS Fluent 2019 R2 (ANSYS, Inc., Canonsburg, PA, USA).  These predictions were used as inputs to a hybrid CFD-PBPK model that was based in part on the model developed by Rygg et al.2-4  Another PBPK model was developed using GastroPlusTM 9.7 (Simulations Plus, Inc., Lancaster CA, USA) for intravenous (IV) and oral absorption of oxycodone HCl, where available IV and oral data were used to parameterize the model.  The distribution and elimination constants obtained in the GastroPlus model were used as inputs to the CFD-PBPK model, and the Pulmonary Compartmental and Absorption and Transit (PCAT™) was used to estimate the nasal absorption constant and permeability.  Dissolution data were collected for the milled drug product used in the in vivo pharmacokinetic (PK) study described in Boyce et al.5 using the dissolution method developed by Feng et al.6 (Figure 1).  These data served as nasal dissolution inputs for the simulations of nasal insufflation of finely milled immediate-release (IR) and ER tablet formulations, as well as coarsely milled ER tablets, all in the 30 mg strength.  Mucociliary clearance rate for the IR formulation, similar to that from Soane et al.,7  was adjusted for the ER formulations to closely match the PK data.5  Prediction values were compared to observed in vivo PK data on a percentage basis.

Results: Predictions of PK using the CFD-PBPK model are shown in Table 1 and Figure 2 for the IR and ER formulations.  The ranges of relative percentage differences between predicted PK parameters and mean PK parameters.5 were between -0.5% and 3.2% for maximum peak concentration (C­max)­, -6.7% and 40.0% for time to Cmax (tmax), and 3.3% and 5.4% for area under the plasma concentration-time curve up to the last recorded data point (AUC0-t).  Mucociliary clearance of particles was predicted as shown in Figure 3 for the three formulations, where the predicted time at which 50% of the particles remaining and the percentage of particles retained were 21 min and 24% for the IR formulation, 71 min and 23% for finely milled ER formulation, and 25 min and 15% for the coarsely milled ER formulation. 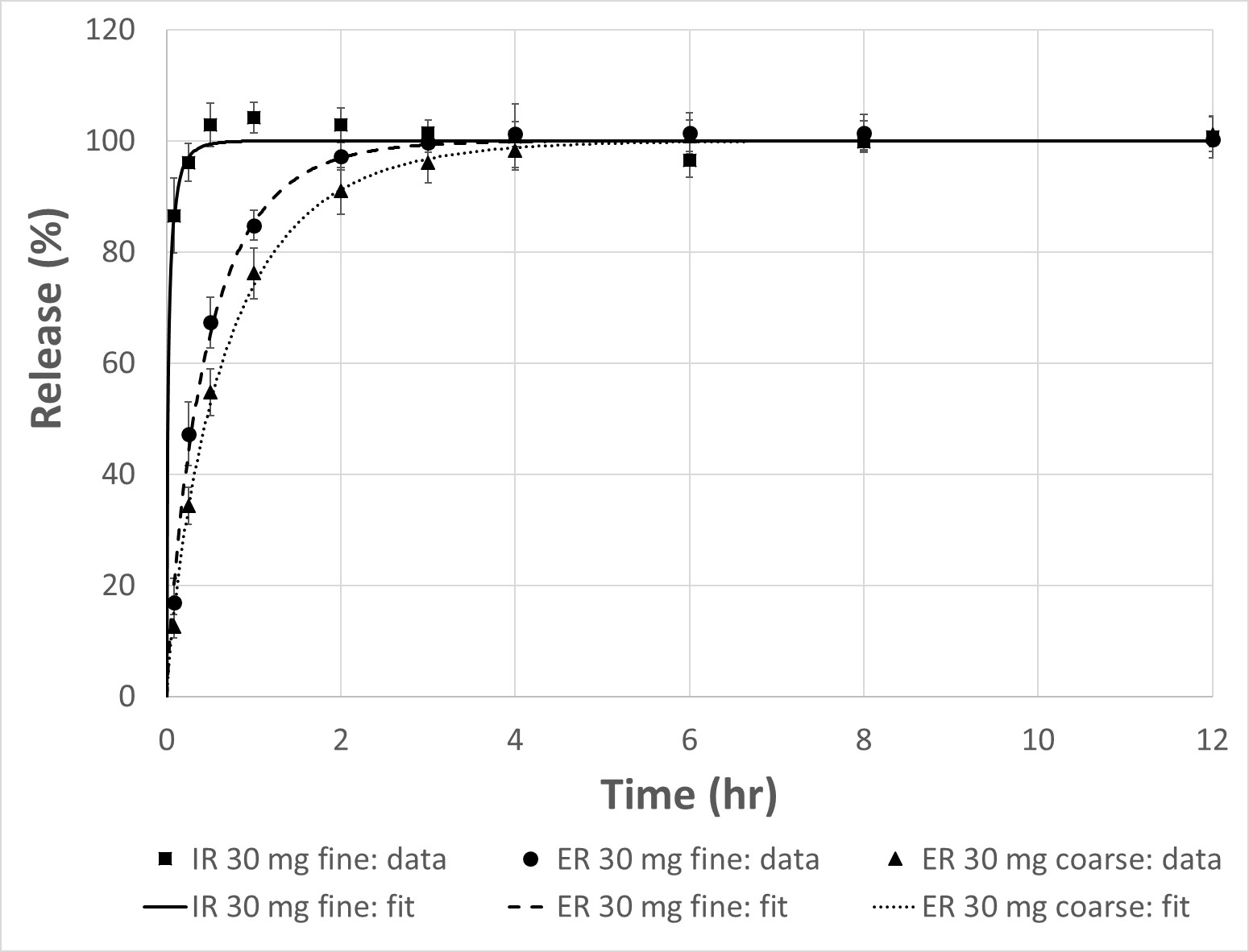 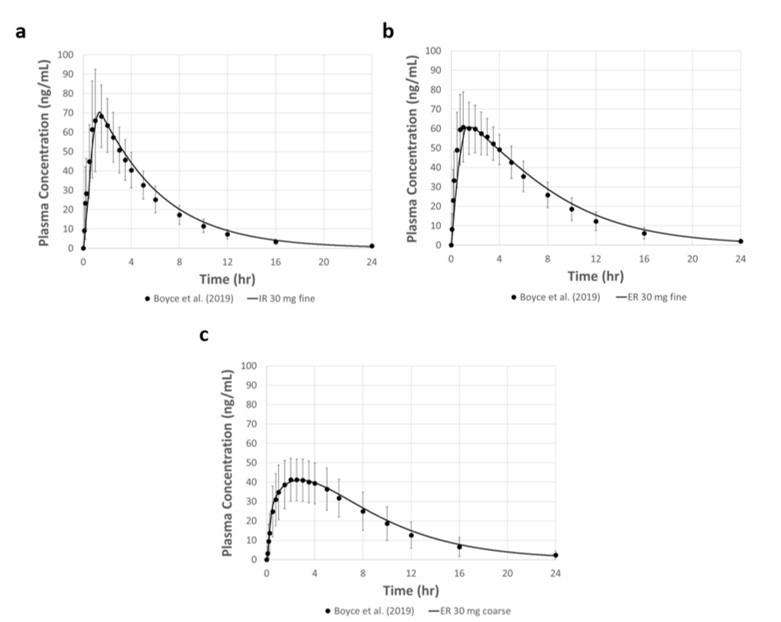 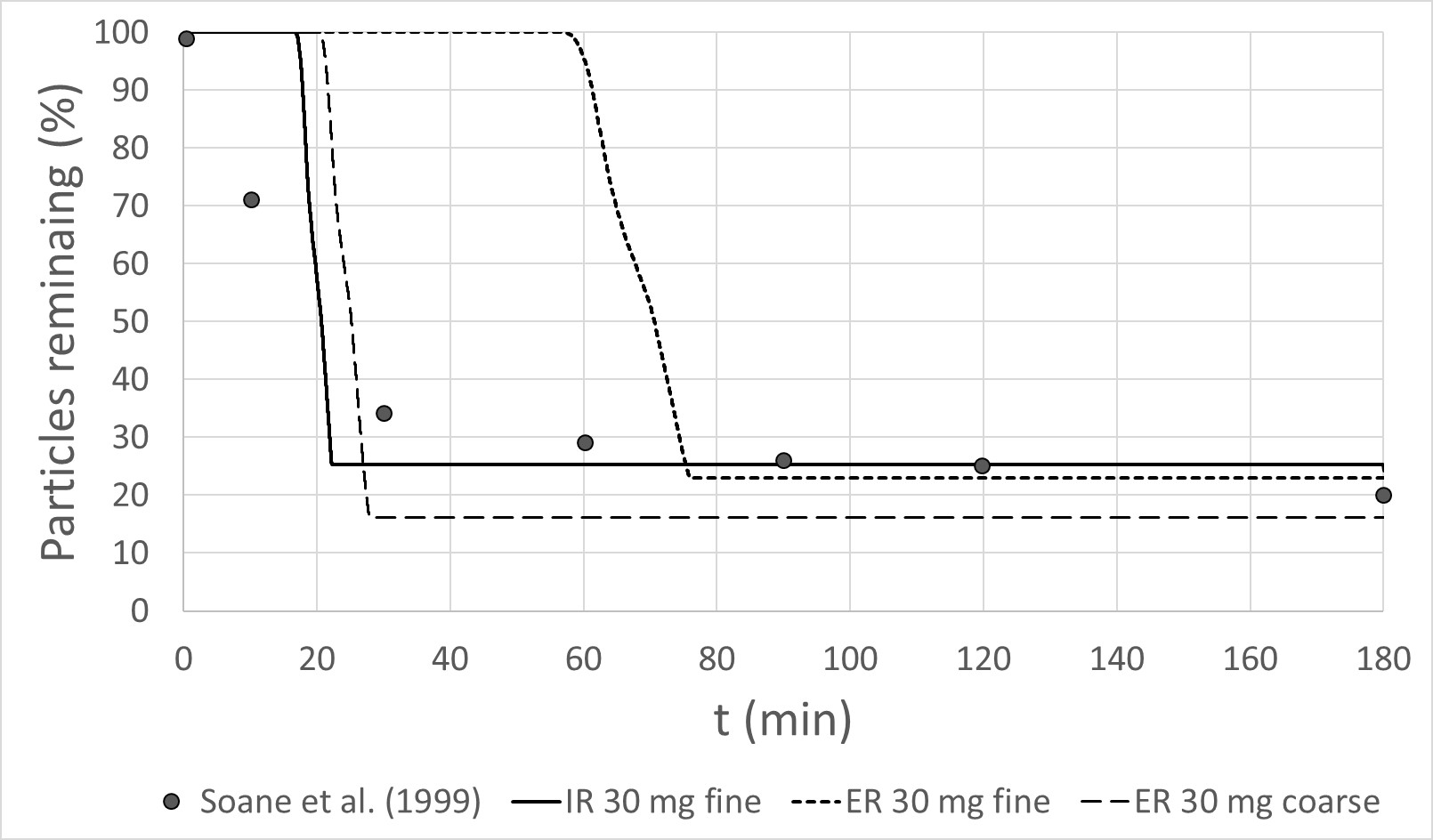