Purpose: Lipid-based excipients (LBE) are known as naturally occurring materials, being easily available, biocompatible, and attractive for the manufacturing of a broad range of dosage forms with enhanced bioavailability or controlled release properties. The main challenge is the propensity of LBEs to solid state transformations, leading to instability of the final product. The most addressed strategies to overcome this problem are tempering the product, or adding modifiers to the system, to accelerate the controlled polymorphic transformation, however, with the risk of causing additional complications, e.g. initiating lipid crystallite growth and phase separation, with negative effect on the stability. The purpose of this work was to investigate the structure-function relation of polyglycerol esters of fatty acids (PGFAs) (Witepsol PMF®) as advanced LBEs with stable solid state. The functionality of several compounds belonging to this group and the correlation between their solid state with the performance of their pharmaceutical products were investigated.

Methods: PGFAs are oligomeric hydroxyethers of glycerol, fully or partially esterified with fatty acids. Tuning the number of glycerol moieties, fatty acids chain length and free hydroxyl groups per molecule results in different HLB, melting point, melt viscosity and wettability (1-3). Thermal behavior of selected PGFAs was analyzed as received and after 6 months of storage at 40 °C via X-ray diffraction and DSC. The wettability was measured (1). The applicability of selected compounds was investigated as tableting and hot melt coating (HMC) (2) excipients and for the manufacturing of solid lipid nanosuspensions (SLN) (3). Tablets were produced using metformin HCl and dicalcium phosphate anhydrate (DCPA) as model substance and filler, respectively. PG2C22-full and PG3C22-partial (Witepsol®PMF 222 and 123) were used as matrix agents. The deformation behavior and flow properties of blends were studied. After direct compression, samples were stored under accelerated conditions for 3 months. The API release, hardness and friability of tablets were measured. The HMC trials were performed in a fluid bed equipment. N-acetylcysteine (NAC) was coated with three PGFAs with different HLB values: PG3C16/C18-partial, PG4C18-partial and PG6C18-partial (Witepsol®PMF 1683, 184, and 186) (2). SLN were produced via melt-emulsification followed by high-pressure homogenization using PG2C18-full (Witepsol®PMF 282) as lipid matrix and poloxamer 188 as stabilizer to encapsulate the model API dexamethasone (3). The analytical methods for characterization of compounds, HMC particles and SLNs including solid state, wettability, melt viscosity, API release, particle size distribution (PSD), encapsulation efficiency (EC), stability thereof, and in vitro safety studies are described in references 1-3.

Results: The DSC and X-ray diffraction data revealed the crystallization of all selected lipids into a stable monophasic system in α-form without transformation during storage at 40 °C (1-3). Direct compression: Blends composing PGFAs showed reduced internal friction between particles and thus improved flow properties compared to control blend, suggesting plastic behavior of PGFAs, confirmed by deformation behavior studies. The blends were processable via direct compression. The resulted tablets showed desired tensile strength and friability. API release was directly proportional to HLB and was stable during storage. HMC: The DSC data showed the absence of low solidification fractions, thus reduced the risk of agglomeration during the coating process. The driving force for crystallization of selected compounds was lower and the heat flow exotherms were broader compared to conventional HMC formulations, indicating a lower energy barrier for nucleation. API release was directly proportional to HLB and was stable during storage (2). SLN: SLN with an API loading of 0.1%, a sharp median particle size of 242.1 ± 12.4 nm, a zeta potential of -28.5 ± 7.8 mV, an EC of 90.2 ± 0.7% were produced. The crystallization of lipid matrix in SLN was in the stable monophasic α-form, and was not affected by process conditions, emulsifier-lipid or API-lipid interactions. This resulted in the absence of particle agglomeration, stable EC and release profile during storage. The nebulization capacity was given by atomizing the SLN through an air jet nebulizer into an inhalable aerosol (2.78±0.04 µm). The in vitro safety of SLN was given (3).

Conclusion: The stable release profile of API from HMC particles, matrix tablets and SLN, and the stable particle size distribution and EC of SLN over storage were attributed to the monophasic crystallization of PGFAs into stable α-form and no crystallite growth. The release profile could be tailored based on the HLB of selected PGFAs. In the case of SLN, the application of PGFAs as stable lipid matrices, without the addition of oils, can pave the way for developing next-generation SLN. Data on in vitro safety of all compounds are available. 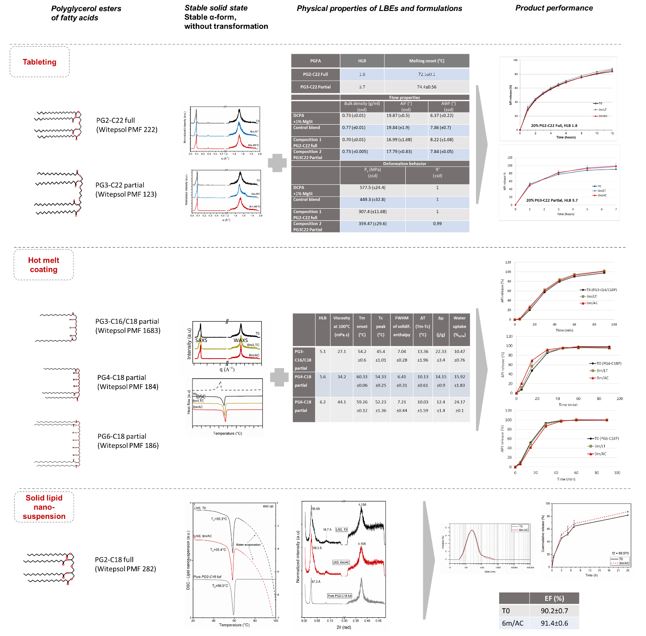