Purpose: In pharmaceutical drug development, drug substances and formulations with long-term physical and chemical stability ensure full optimization of a drug when administered to the patient. During the time-consuming process of formulation development, it is critical to employ methods that inform on possible avenues of reduced bioavailability.1 Identifying these potential failure points early can reduce the changes of late-stage failure, which can be costly and time consuming to remediate. For active pharmaceutical ingredients (APIs) administered as crystalline formulations, phase transitions to alternate crystal forms can have adverse effects on aqueous dissolution rates, and affect bioavailability.2-4 Administering these drugs as amorphous solid dispersions (ASDs) does not altogether avoid this problem, as spontaneous crystallization can occur during storage or even in vivo under certain conditions.5-6 Phase transitions can dictate physical depletion of bioavailable drugs through transitions to non-soluble crystal forms, as well as susceptibility to chemical depletion through transitions to more reactive states. Therefore, there is a need in the pharmaceutical industry to thoroughly map the phase space of potential drug candidates, excipients, and mixtures.

Methods: In this work, we demonstrated stochastic differential scanning calorimetry (SDSC), the integration of second harmonic generation (SHG) microscopy with differential scanning calorimetry (DSC) analysis to monitor phase transitions on a per-particle basis. The experimental apparatus is depicted in Image 1 and consists of a home-built SHG microscope integrated with an optical DSC stage. Images were acquired by raster-scanning the beam from a tunable femtosecond laser across the field of view with approximately 80–120 mW of power at the sample plane. Videos of the SHG data were recorded at 17 frames and 8 frames per second for urea and trehalose dihydrate respectively, while the DSC ramped from room temperature to the melting point of these samples. Standard aluminum sample pans were used in all DSC experiments, and were not sealed to allow for optical access of the sample.

Results: Development of SDSC enabled a thermal and physical analysis of single-particle stochastic phase transformations in organic crystals such as urea, which collectively contribute to the ensemble-averaged thermal transients interrogated by DSC. Image 2 shows the results of this work, such that the SHG-activity of crystalline urea was highly sensitive to the specific molecular packing arrangement within a noncentrosymmetric lattice, providing access to structural information otherwise unavailable by conventional imaging approaches.1,2 Following the studies of this model system, SDSC was performed to interrogate samples of crystalline trehalose dihydrate which exhibit complex phase-transition behaviors.3 Image 3 shows the more complex behavior of this system such that heating is complicated by the existence of varying polymorphs of trehalose that form under different conditions, leading to an ongoing debate on how the polymorphs of trehalose are connected to each other during various thermal/phase transformations.4

Conclusion: SDSC was shown to enable connection of internal structural rearrangements within crystalline materials measured by SHG on single particles to the heat flow recorded by DSC. SHG measurements were sensitive to variations in the molecular packing arrangements during the phase transitions of individual particles that are generally inaccessible in conventional microscopy. Coupling the structural data acquired from SHG imaging with DSC enabled single-particle measurements disentangled from the ensemble-averaged thermal transients recorded with DSC. A proof-of-concept SDSC experiment was performed on urea, which has a single solid/liquid phase transformation. Next, SDSC was used to characterize the phase behavior of the more complex system, trehalose dihydrate, allowing observation of dehydration events with higher temporal resolution compared to that of the temporal resolution of typical DSC measurements. Thus, SDSC is proposed as a novel technique for the pharmaceutical drug development pipeline for the characterization of single-particle phase transformations. 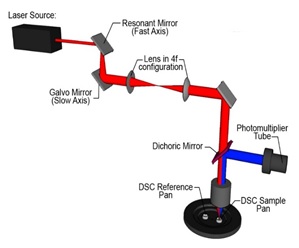 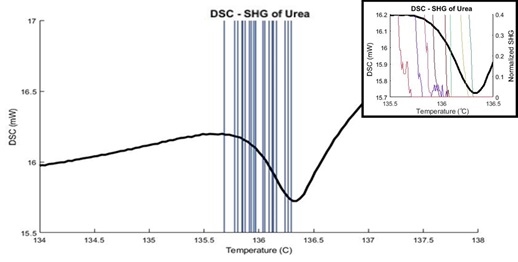 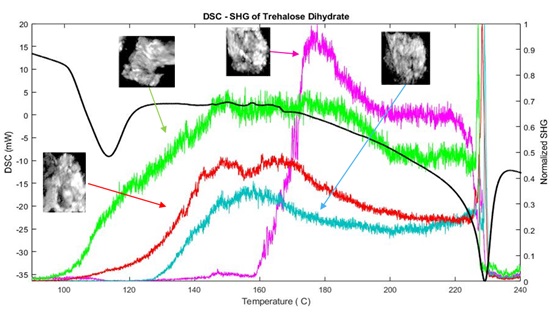