Purpose: The design of solid oral dosage forms is an important step in the development of new drug products. However, trial-and-error approaches are still widely used to select the right combination of excipients complementing the active pharmaceutical ingredient. This is not only time-consuming but also rather expensive. Optimizing the selection process requires thorough characterization of the raw materials to identify possible incompatibilities early on. One novel characterization method is in-die ultrasonic testing. To monitor the compaction process at production relevant speeds Kilian’s Inline Measurement system (KIM) has been introduced by Hagelstein et al. [1]. To ascertain its applicability, it is crucial to determine whether the KIM system can discriminate between materials with varying compaction properties. Therefore, in this study four mannitol grades with different areas of application were examined and compared.

Methods: The mannitol grades used in this study are: Parteck M 200 (Merck KGaA, Darmstadt, Germany), Parteck Delta M (Merck KGaA, Darmstadt, Germany), Pearlitol 200 SD (Roquette, Lestrem, France) and D(-)-Mannit (Roquette, Lestrem, France). Among others the materials differ in particle size, surface area and, most importantly, their crystal modification. While Parteck M 200 and D(-)-Mannit consist solely of β-mannitol, Pearlitol 200 SD is composed of equal parts α- and β-mannitol and Parteck Delta M only of the δ-modification. Parteck M 200 and Pearlitol 200 SD are typically used in direct compression formulations, Parteck Delta M is specifically designed as a wet granulation excipient and D(-)-Mannit is intended for granulation as well. The true density of the materials was measured with the UltraPyc 1200e gas pycnometer (Quantachrome, Boynton Beach, Florida) and used to calculate the relative density, i.e. solid fraction, of the powder in-die. The samples were compressed on the Styl’One Evolution compaction simulator (Romaco Kilian, Cologne, Germany) equipped with the KIM system. The time of flight of an ultrasonic signal sent by a transducer inserted into the upper punch and received by a second one in the lower punch was measured and the velocity of the sound wave was calculated. The changes in velocity were tracked throughout the whole compaction process.

Results: The ultrasonic velocity measured during the compaction process of the different substances increases with increasing relative density of the compact and decreases during decompression until the contact between punch tip and tablet is lost and the signal stops. However, there are obvious differences between the materials. Some, like e.g., the maximum solid fraction reached when applying a maximum pressure of 250 MPa, are also visible in the classic pressure-solid fraction plot. Additional differences can be observed when looking at the ultrasonic velocity. The highest value is reached by Parteck Delta M while the other three substances all reach about the same maximum. Although the absolute speed of sound at a given solid fraction differs, the materials can be divided into two groups depending on the shape of the signal: Pearlitol 200 SD and Parteck M 200 on one hand and Parteck Delta M and D(-)-Mannit on the other. The velocity increase during compression is steeper for the second group. Moreover, the velocity loss during decompression is more pronounced.

Conclusion: It is possible to discern the different mannitol grades by comparing the changes in velocity over the whole compaction process. The distinction is more prominent than in the classic pressure plot since the velocity serves as an additional dimension. There are visible differences in the velocity profiles of the samples, even though all consist of the same basic material. The closest resemblance can be observed when comparing the two grades developed for direct compression and not – as may have been expected – between the two β-mannitol samples. It has been shown that the ultrasonic velocity through the samples, especially the relative change, is not solely dependent on the basic material analyzed but rather on the compression behavior. This indicates the applicability of ultrasonic in-die measurements in the characterization of pharmaceutical materials. 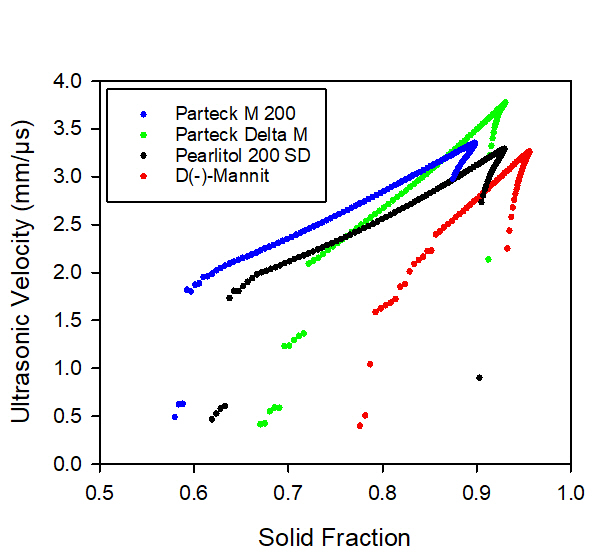 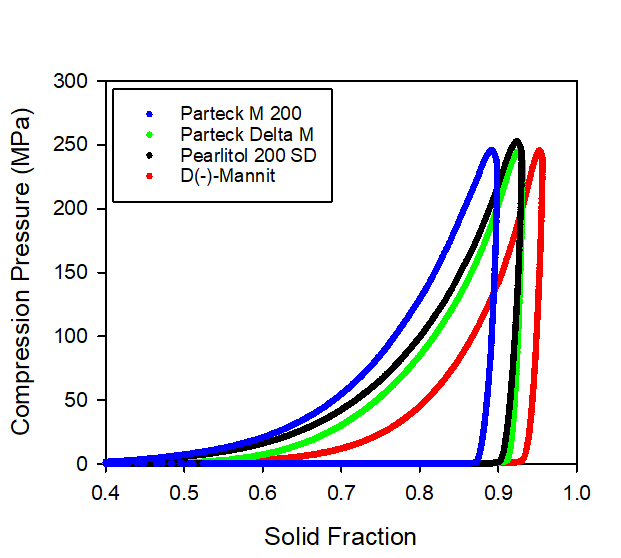 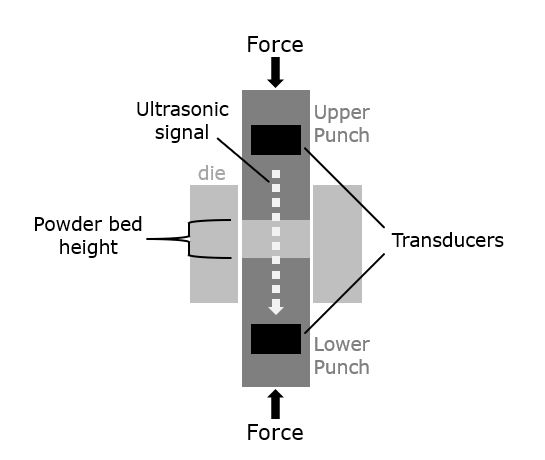