Purpose: Poorly water-soluble drugs can potentially be formulated as amorphous solid dispersions (ASD), allowing improvement in API apparent solubility. ASD polymer selection usually requires estimation of drug solubility in prospective polymer carriers. Theoretically, the saturation solubility (S=1) marks the boundary between the thermodynamically stable and metastable regions, representing the concentration of drug that can be dispersed in polymer without crystallization or phase separation. Therapeutically useful ASDs can, however, be formulated at S >1, assuming a viable shelf-life, meaning that predictions of whether a supersaturated dispersion can form is meaningful for development. Here, it is shown that the molecular descriptor R3m accurately predicts formation of dispersions for drugs in the polymer polyvinylpyrrolidone-vinyl acetate (PVPva), in cases where S=1 is well below the desired drug-loading.

Methods: Griseofulvin, itraconazole, and ketoconazole were used to prepare ASD with PVPva, via either melt-quench or spray drying, at 15% and 75% drug-loading. Confirmation of dispersion formation was done after 24 h using powder X-ray diffraction (PXRD), differential scanning calorimetry (DSC), and polarized light microscopy (PLM). The dissolution endpoint method was used to evaluate drug solubility in PVPva. Physical mixtures (PM) of each drug and PVPva were prepared, in which polymer concentrations ranged from 0% to 60% w/w. PM were cryomilled at 10 Hz to improve in situ mixing, by pre-cooling samples in a liquid nitrogen bath, followed by alternating 2 min milling and sample cool-down steps. The total milling time ranged from 4-60 min; sample-specific milling time was inferred by stabilization of dissolution endpoint. Milled samples were immediately transferred to a P2O5 desiccator and equilibrated to ambient temperature before opening, to minimize water condensation. PXRD patterns and PLM images were collected to ensure that detectable crystallinity remained of the original solid form. Triplicate samples from each cryomilling experiment were analyzed by DSC at a ramp rate of 1°C/min. Samples corresponding to the final milling duration for each PM were further analyzed in triplicate allowing a total of 6 replicates for temperature offset determination.

Results: The molecular descriptor R3m was calculated for griseofulvin (0.833), itraconazole (0.872), and ketoconazole (0.814). In accordance with our previously published model, these values all predict that, since R3m >0.632, they will all form an ASD in PVPva, since each API has a combination features conducive to dispersion formation in this polymer. The solubility of griseofulvin, itraconazole, and ketoconazole in PVPva were interpolated at room temperature (RT) using the van’t Hoff Equation fit of dissolution endpoint data (Figure 1), to project S=1 for  the anticipated ASD storage temperature. Griseofulvin, itraconazole, and ketoconazole, respectively were determined to have solubilities equal to 1.3%, 3.8%, and 3.9% w/w. The coefficients of determination (R2) for van’t Hoff plots indicate excellent linearity of data, and the confidence intervals at α = 0.05 for the RT solubilities for each drug in PVPva are reported in Table 1. The supersaturation ratio (S) for griseofulvin, itraconazole, and ketoconazole at 15% and 75% loadings are also shown in Table 1. Although all the drugs have RT solubility < 4% in PVPva, dispersion formation was confirmed for each drug at 15% and 75% w/w drug-loadings and characterized, consistent with the R3m predictions.

Conclusion: API solubility in polymer reflects the formation of adhesive interactions than can occur as an ASD forms. These data suggest that, although S=1 for each drug in PVPva is well below the 15% and 75% w/w drug-loadings, griseofulvin, itraconazole, and ketoconazole can still form dispersions that persist for at least 24 h, consistent with R3m >0.632. ASD formation is not necessarily limited by the RT solubility of drug in polymer, indicating that other factors kinetically stabilize these dispersions at high supersaturation ratios. This work further reflects that combination of molecular properties collectively described by R3m better predicts dispersion formation than relying on API-polymer solubility alone. Future work will expand upon drugs that display low solubility in PVPva and high R3m value to challenge the prediction accuracy. 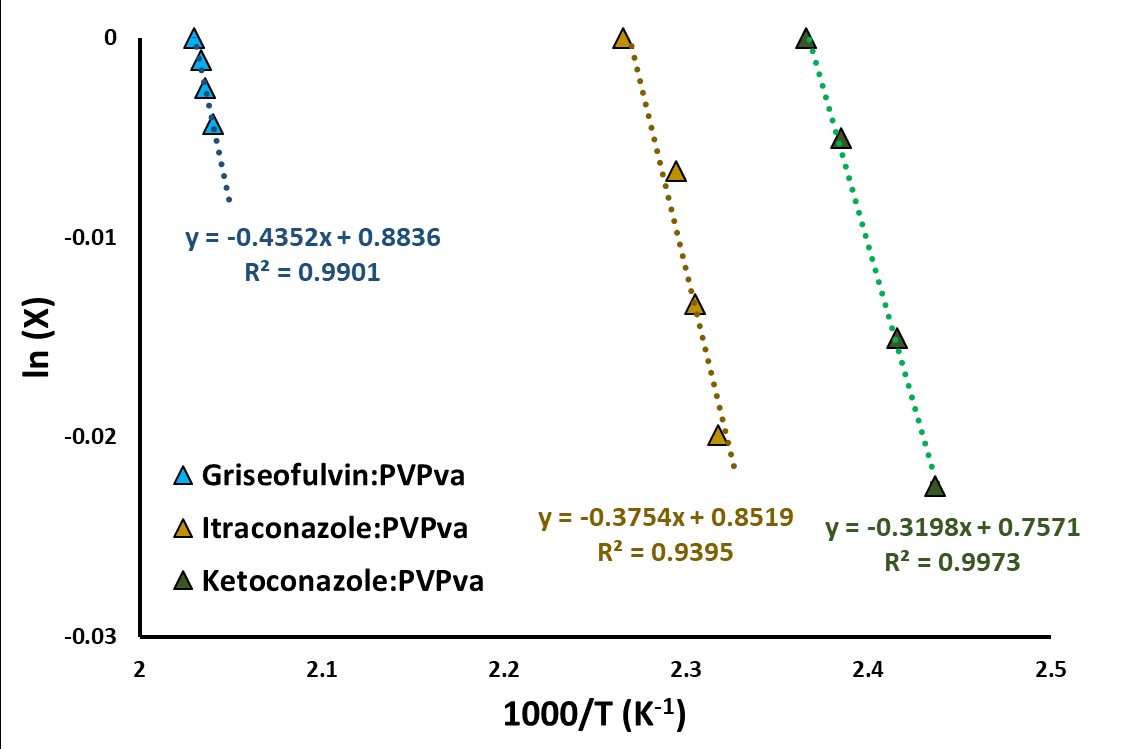