Purpose: Selective laser sintering (SLS) is a single step three-dimensional printing (3DP) process that is gaining momentum in the field of pharmaceuticals. This novel 3DP process offers opportunities for manufacturing various pharmaceutical dosage forms with a wide array of drug delivery systems. The purpose of this research was to demonstrate the feasibility of using SLS 3DP to fabricate innovative smart solid dosage forms with stimuli-responsive controlled drug release properties. Also, optimizing the printed tablets process was reported here by controlling printing parameters such as a laser scanning speed (1, 50, 100 and 200 mm/s), hatching space (25 and 12.5), and temperature (surface temperature 50oC, 85oC). Besides, carbonyl iron was loaded to the printed tablets for both aiding the sintering process and providing magnetism.

Methods: 5% Isoniazid (≥99% TLC, analytical standard, Sigma-Aldrich, USA) was used as a model drug (Molecular weight 137.14 g/mol, melting point 171-173 ◦C). Kollidon® VA64 (BASD, USA), a vinylpyrrolidone-vinyl acetate copolymer, was selected as polymeric carrier excipients (Tg = ~105 ֯C). 3% w/w Candurin® Gold Sheen and 5% carbonyl iron were added to the formulations. For all the formulations, 200 g of a mixture of the model drug and excipients were blended using a mortar and pestle. All the powders were sieved using a 300 µm sieve to permit a better flow of the powder particles and transferred to the SLS printer. The desktop SLS printer (Sintratec Kit, AG, Brugg, Switzerland) was used to print the oral dosage forms. 3D builder (version 18.0.1931.0, Microsoft Corporation) was used to design the templates of the solid dosage forms. Various printing paraments were optimized in order to get suitable solid tablets.  DSC and XRD were also used to characterize the granules and drug-loaded printed tablets.

Results: The desired sintered tablets can be obtained by adjusting the internal temperature of the SLS printer, the laser scanning speed, and the hatching spacing (the distance between interior hatching lines). The internal temperature depends on the glass transition temperatures of the excipient polymers and the melting point of the model drug. In this experiment, the suitable temperature range found is from 65 ֯C to 85 ֯C. By reducing the laser scanning speed and hatching spacing, a longer interaction time between the powder particles and the laser beam leads to the higher transmission of energy-producing denser tablets. On the contrary, by increasing laser scanning speed and hatching spacing, less energy is transmitted, resulting in the production of weaker and more porous structures in tablets (shown in Figure 1.). By comparing the mixture with and without carbonyl iron, the mixture powder with carbonyl iron produced denser tablets under the same printing parameters (shown in Figure 1.B). The optimized printing parameters fabricated desired sintered tablets with consistent tablet weight (approximately 0.02 SD) and thickness (about 0.15 SD). The denser the tablets are, the less the variation is.

DSC and XRPD analysis of the drug, polymers and mixed materials before printing and of the sintered tablets, were performed to study the solid-state of drug phase and the degree of magnetic iron incorporation in the polymers (shown in Figure 2 and Figure 3). Figure 2 demonstrated that the isoniazid raw ingredient exhibited a melting endotherm at approximately 172.7֯C corresponding to its melting transition. The DSC data of the sintered tablets showed no evidence of melting endotherm at 172 ֯C which means the model drug was either molecularly dispersed within the excipient or dissolved in Kollidon VA64due to the fusion generated during the printing process.  The X-ray powder diffractograms showed an identical Fe peak at 45֯  in sintered tablets and confirmed the presence of carbonyl iron (shown in Figure 3.) but with the absence of any drug peaks.

Conclusion: For the current results, the versatility of the SLS 3D printer was used to manufacture oral pharmaceutical tablets successfully. This printing process provides a novel way to prepare a magnetic drug delivery system in a single step. Further, the tailoring of drug release behavior is possible by adjusting the tablets' formulations and printing parameters, including the laser scanning speed, the hatching spacing, and the internal temperature. Ultimately, this concept can be adopted for the customized drug performance that specifically dependents on the patients’ requirements. 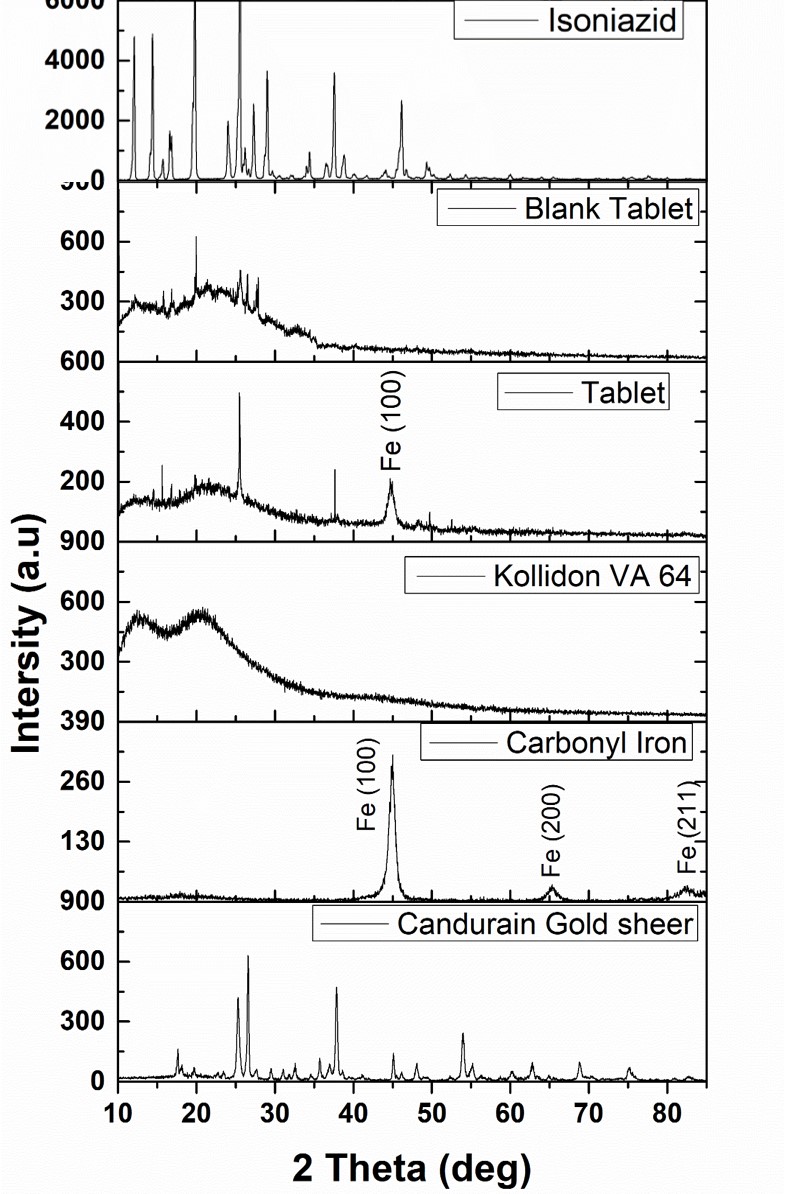