Bioavailability of Apalutamide Tablets Administered in Applesauce and Use of Yogurt, Orange Juice, and Green Tea as Alternate Food Vehicles

Purpose: Apalutamide (ERLEADA®) is a next-generation androgen receptor inhibitor currently approved in the United States and European Union for the treatment of patients with non-metastatic castration-resistant prostate cancer and metastatic castration-sensitive prostate cancer. Per its approved product labeling, apalutamide 240 mg (4 x 60 mg tablets) is to be taken once daily with or without food. Since the market availability of apalutamide, the manufacturer received a number of inquiries from health care providers for alternative routes of drug administration, especially for those who have swallowing difficulties. A common approach to improve swallowability and palatability involves crushing of the tablet and mixing with food vehicles such as applesauce. However, the act of crushing apalutamide may unintentionally expose caretakers to the drug which should be avoided due to its hormone-based mechanism of action. Due to the unique formulation of apalutamide, it can be mixed directly with applesauce without the need to crush. To evaluate the in vivo performance of apalutamide in conjunction with food vehicles, we sought to determine the relative bioavailability of apalutamide administered as a mixture with applesauce vs. whole tablets in healthy fasted male volunteers and to confirm dose accuracy and in-use stability of apalutamide tablets in different food vehicles (applesauce, yogurt, orange juice, and green tea).

Methods: In a crossover phase 1 trial, healthy men age 18-55 years were randomly assigned to receive whole apalutamide tablets followed by an apalutamide-applesauce mixture (with a required washout period of 42-56 days between the two periods) that was prepared by a pharmacy technician or pharmacist (or the reverse sequence). Pharmacokinetic assessments were performed through a 168-hour sampling period. Subsequent in vitro compatibility studies evaluated the dose accuracy and in-use stability of apalutamide tablets when mixed into applesauce, yogurt, orange juice, and green tea. Four apalutamide tablets were added to a specified amount of vehicle (ie, 50 g or 200 g of applesauce or yogurt and 50 mL or 200 mL of orange juice or green tea extract), then the content of the administration container was gently mixed with a spatula for about 10 seconds. The content was gently mixed with a spatula for about 10 seconds after 15 minutes and again after an additional 15 minutes, until a uniform mixture was formed (videos of the procedure will be shown).

Results: The phase 1 trial (N=12) found comparable total exposure between the treatment arms. Apalutamide plasma concentrations reached a maximum 3 hours after administration of whole tablets and 2 hours after administration of the applesauce mixture (Figure 1). Per statistical analysis of the pharmacokinetic parameters of apalutamide, total exposure of apalutamide increased by 5% and peak concentration by 27.6% for apalutamide-applesauce mixture vs whole tablet administration (Table 1). The compatibility studies found that apalutamide tablets were comparable in purity and dose accuracy when mixed in 50-200 g of applesauce or yogurt or in 50-200 mL of orange juice or green tea (Table 2). 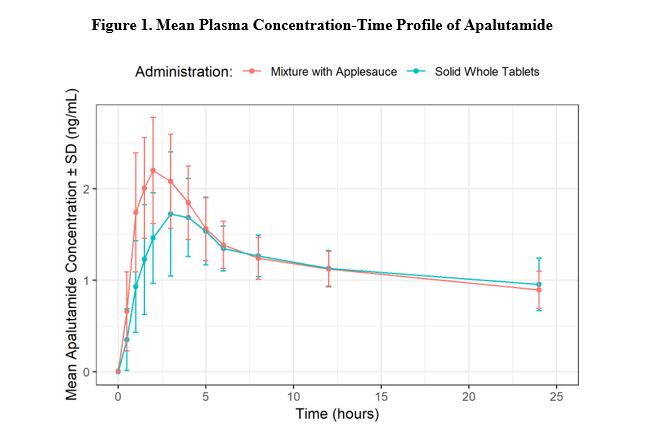