Purpose: Precise knowledge of the binding behavior of a particular drug to physiological macromolecules is essential to determine the correct dosing regimen. However, not only in pharmacokinetics, but also in drug formulation development it is important to know how the drug molecules interact with macromolecules. In particular, the quantitative determination of drug-polymer interactions will be a first means toward a rational formulation development of amorphous solid dispersions and additionally for the rational development of new functional polymeric excipients for drug delivery.

Results: Figure 2 shows the HCT concentration versus the volume of the HCT solution added to the interaction compartment. For comparison, pure HCT without albumin or synthetic polymer was investigated. In this set-up and the corresponding figures, a deviation from the ideal curve (obtained from equation 1) reflects the degree of interaction of the drug molecules with the polymer. If no drug is held back in the interaction compartment, the ideal calculated curve and the measured curve are identical. In case of interaction between polymer und drug, drug molecules are retained in the interaction compartment, as the polymer cannot cross the filtration membrane. In the literature, protein binding for HTC in plasma of 64% is observed2. The data obtained from experiments of HCT with SA matches these observations as the HCT curve with Albumin in the interaction compartment deviated substantially from the ideal curve (Figure 2).  Also, similar effects were observed for the two polymer excipients HPMCAS-MF and Eudragit EPO. Both polymers are known to act as crystallization inhibitors for HCT from supersaturated solutions. These effects could not be seen for copovidone.

Conclusion: The developed method is a suitable means to test the interaction between different polymers and active pharmaceutical ingredients. It has been demonstrate to determine the well-known binding of actives to proteins. Additionally, it has also been shown that strong interactions between polymer and actives could be detected. As known from prior studies, HPMC AS MF improves the kinetic solubility of HCT and delays recrystallization from supersatured solutions. The same effects, but to a lower extend have been reported for Eudragit® EPO. These results correlate to the degree of interaction determined with the developed tangential flow filtration method. 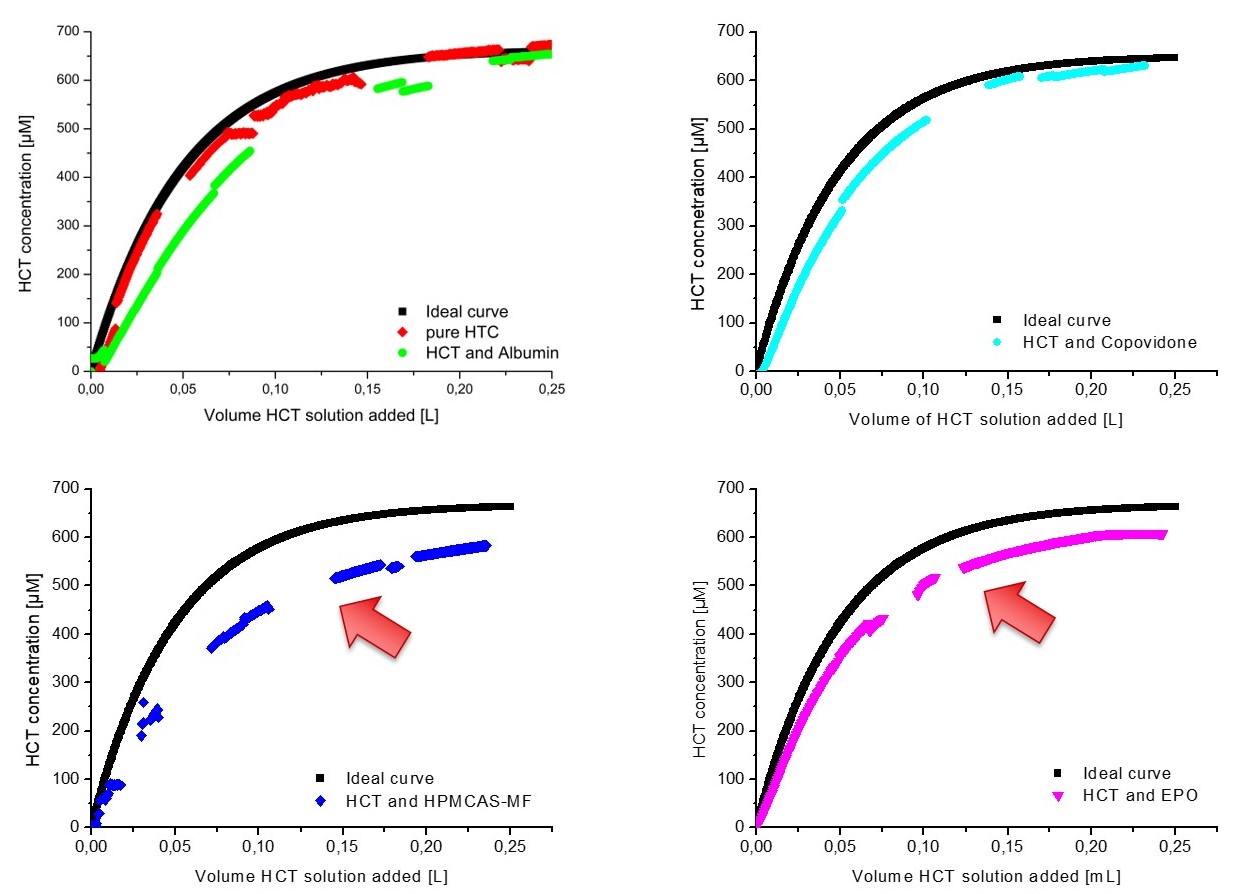