Purpose: Long-acting drug delivery systems are designed to achieve desired release profiles and release characteristics, offering multiple advantages such as improved patient centricity and reduced systemic toxicity. Due to the nature of such systems, the development phase can be long even with an accelerated in vitro release method. In this work, a new high resolution micro-image-based characterization approach has been applied with the goal of seeking a fundamental understanding of the micro-scale physical and structural arrangement of different material phases in the complex long-acting controlled release system and how the microstructure impacts the device performance. With the advancement of artificial intelligence and cloud computing, the imaging analytics has greatly evolved recently, revealing information hidden at micro-scale that traditional characterization approaches fail to divulge due to lack of resolution. The voxel-based representation of drug dispersion network was used to calculate characteristic parameters of various material phases including but not limited to particle size distribution, spatial distribution and to analyze their interactions, demonstrating itself with great potential as a powerful and time efficient tool of long-acting drug delivery systems characterization.

Methods: In this study, an in-house levonorgestrel (LNG) intrauterine system (IUS) was prepared following the same formulation (i.e., qualitatively (Q1) and quantitatively (Q2) the same) [i] and compared side by side with the commercially available Mirena IUS device (the reference listed drug (RLD)) under stressed in vitro release condition[ii] and via micro-imaging technologies. Focused Ion Beam – Scanning Electron Microscope (FIB-SEM) was used to analyze two IUS samples (in-house vs. Mirena) and for each IUS sample, one device prior to release and one post completed release were analyzed with either 2D or 3D FIB-SEM. The collected images were then analyzed by artificial intelligence-based image analytics. The active pharmaceutical ingredient (API) particle size distribution, spatial uniformity, volume fraction of each material phase and permeability were assessed based on the high-resolution FIB-SEM images. Energy dispersive X-ray spectroscopy (EDS) confirmed the material phases in these samples.

Results: Under the same in vitro release conditions, the Q1/Q2 in-house IUS had slower release than the RLD, Mirena IUS. FIB-SEM revealed two major differences between the in-house IUS and RLD (Figure 1): 1) the API particle size in in-house IUS was ~ five-fold bigger than that in RLD (Table 1); 2) the polymer used in the RLD monolithic layer was softer than the in-house IUS. Both the API particle size and the elasticity of the polymer affected the release of API, leading to faster drug release of RLD than in-house IUS, correlating with in vitro release profiles. The images of the post completed release samples demonstrated a small amount of API residue for both systems, but more thorough entanglement of API and the polymer matrix for RLD, which led to the disappearance of phase separation in the RLD sample.

Conclusion: The FIB-SEM micro-images demonstrated the inherent differences between the in-house IUS and RLD. The artificial intelligence-based image analytics approaches allowed the analysis and quantification of hundreds of images semi-automatically. The imaging analytics data correlated with in vitro observations, which may offer an alternative approach for IUS performance characterization/prediction with improved time efficiency and for Q3 microstructure bioequivalence evaluation. 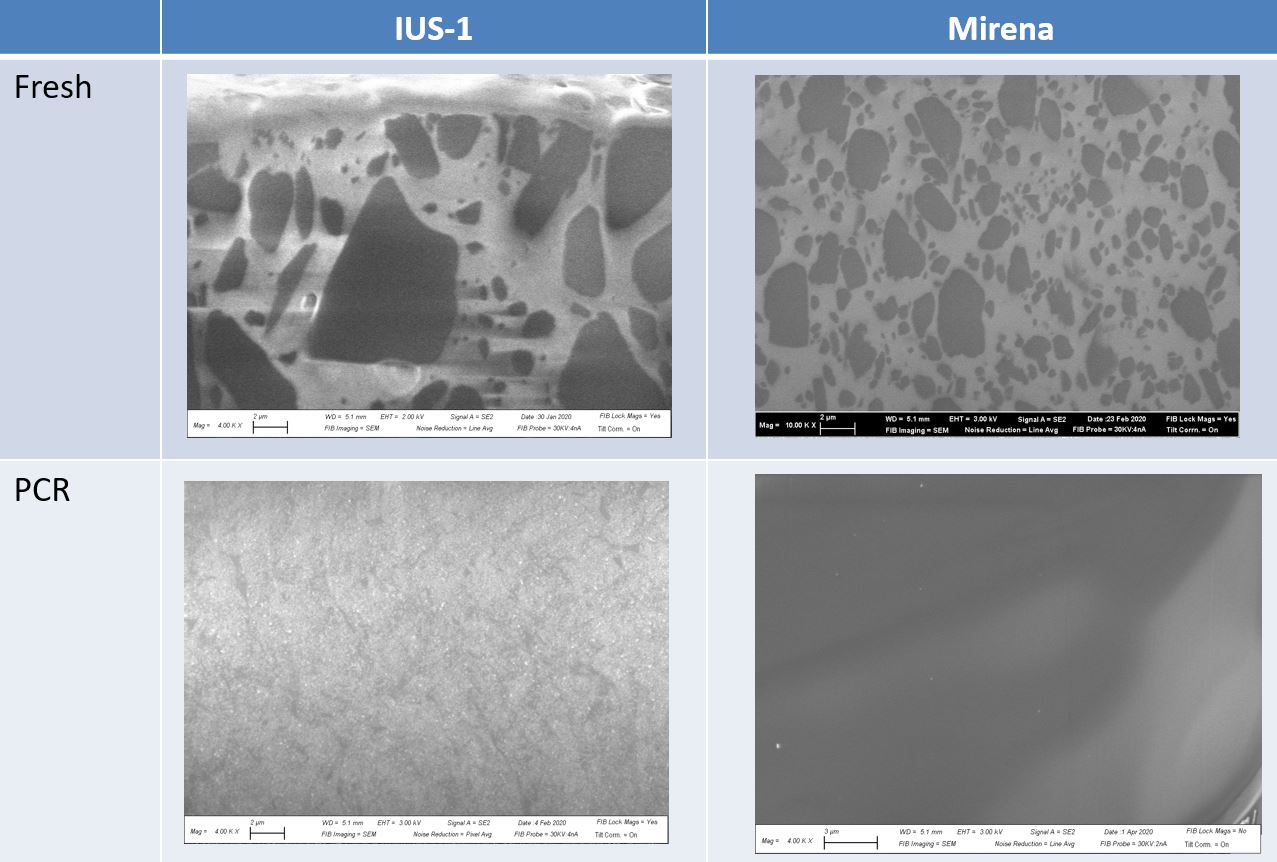