Detection of Proteins at Low Attomolar and Sub-attomolar Concentrations Using Digital ELISA: Pushing the Detection Limits of Simoa Down by 100x

Purpose: Improve the sensitivity of the single molecule array (Simoa) technology for performing digital ELISA by using 100-fold fewer beads and increasing the fraction of capture beads analyzed.  Improve the detectability of proteins in blood at attomolar concentrations.

Methods: We used 5,000 beads to capture target proteins from a sample (vs. 500,000 beads for standard digital ELISA) to increase the ratio of molecules to beads.  Sample incubation times were increased to allow capture of all proteins in the sample.  Beads were washed using a centrifugal washer to minimize bead loss during.  Beads were loaded into arrays of femtoliter arrays on the Simoa disk on a modified SR-X instrument using a method that combined magnetic fields and flow-induced meniscus forces.  All the wells in the Simoa array were analyzed using full field-of-view images.  Based on these optimized approaches, improved digital ELISAs were developed using reagents from existing Simoa kits.

Results: Bead read efficiency--the fraction of beads used during sample incubation that were analyzed—was improved from 5% to 50% using the optimized processes for assay, bead loading, and image analysis.  The increased bead read efficiency allowed us to use 100-fold fewer capture beads, and we demonstrated increased slopes (i.e. average enzymes per bead (AEB) per unit concentration) from this reduction in capture beads.  Assay background did not change from using fewer beads, so signal-to-background and limit of detection improved by 100-fold using 100-fold fewer beads.  Based on greater slopes, we developed an assay for IL-17A with a limit of detection (LOD) of 0.7 aM, 437-fold more sensitive than standard digital ELISA.  A digital ELISA with improved sensitivity was used to measure IL-17A in 100 serum and plasma samples with 100% detectability, compared to 51% for standard digital ELISA.  Low numbers of capture beads yielded improved LODs for IL-12p70 (0.092 aM), p24 (9 aM), and interferon alpha (46 aM).  IL-4 and PSA showed no improvements in sensitivity using fewer beads, due to low antibody loading on beads and increased non-specific binding, respectively.

Conclusion: The sensitivity of digital ELISA can be improved by 100-400-fold to sub-attomolar concentrations using 100-fold fewer capture beads and increasing the efficiency of reading beads by 10-fold compared to conventional digital ELISA.  The greater sensitivity of the digital ELISAs allowed us to further reduce the “sea level” of protein detection and see more of the “iceberg” of proteins in serum.  Some of the assays reported here approach the physical limits of immunoassays for detecting proteins in a sample.  For example, the assay for IL-12p70 using ~2,700 beads had an LOD of 92 zM or only ~11 molecules in the 200 uL sample.  The ability to systematically develop antibodies with high on-rates, high coupling efficiency to beads, and low non-specific interactions with other antibodies, will be key to making the low bead digital ELISA a generic approach to sub-attomolar detection limits for all proteins. 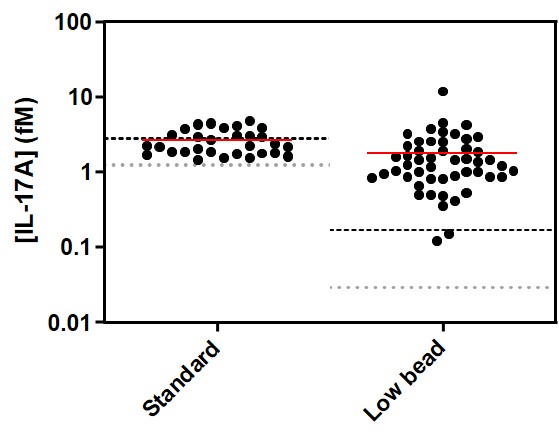