Purpose: Formation of amorphous solid dispersions (ASD) has been demonstrated to be effective in enhancing solubility of poorly soluble drugs. In our previous study, ASD was successfully converted into tablet, which can be used as a final dosage form. It inherently provides lower porosity and hence lower interaction with moisture. In addition to the aesthetic and functional benefits of film coating, when applied to tablets containing ASD this would add a moisture barrier to stabilize the formulation. As ASD is a thermodynamically unstable system, an amorphous form of the drug may recrystallize during processing and storage of the product. The resulting recrystallization would affect drug solubility, dissolution and chemical stability of the drug.  The purpose of this study was to evaluate the effect of different aqueous Opadry® film coating systems on tablets containing ASD of itraconazole.

Methods: ASD of itraconazole (ITR) and hypromellose acetate succinate (HPMCAS) were prepared by HME using a twin-screw extruder, in 1:3 ratio of drug: polymer. The feeding rate, screw speed and target processing temperature were set at 3-7 g/min, 100 rpm and 170°C respectively. The extrudates were then air-cooled, pelletized and milled (ZM 200, Retsch) into powder using a two-pass method (500 µm and 350 µm screen) at 18000 rpm. Milled extrudates (50% w/w) were mixed with StarTab® directly compressible starch (49.5% w/w), lubricated with magnesium stearate (0.5% w/w) and compressed on a rotary tablet press (Piccola 4x4 B/D) using 12.7 mm standard round concave tooling. Four different Opadry film coating systems were dispersed in water and applied on the above tablets at 4% w/w weight gain, using a perforated coating pan (O’Hara Labcoat II) according to process parameters listed in Table 1. The tablets were cooled to room temperature in the pan before unloading, and then stored in double plastic bags with a desiccator. Tablets were then packed in 75 cc HDPE bottles (closed with screw cap and induction seal, with or without desiccants). Both uncoated and coated tablets were placed on accelerated storage condition at 40ºC / 75% RH for up to six months. The tablets were characterized for appearance, dimensions, hardness, disintegration time, moisture content and drug assay. Dissolution tests were performed in 1000 ml phosphate buffer pH 6.8 using Apparatus II at 75 rpm. 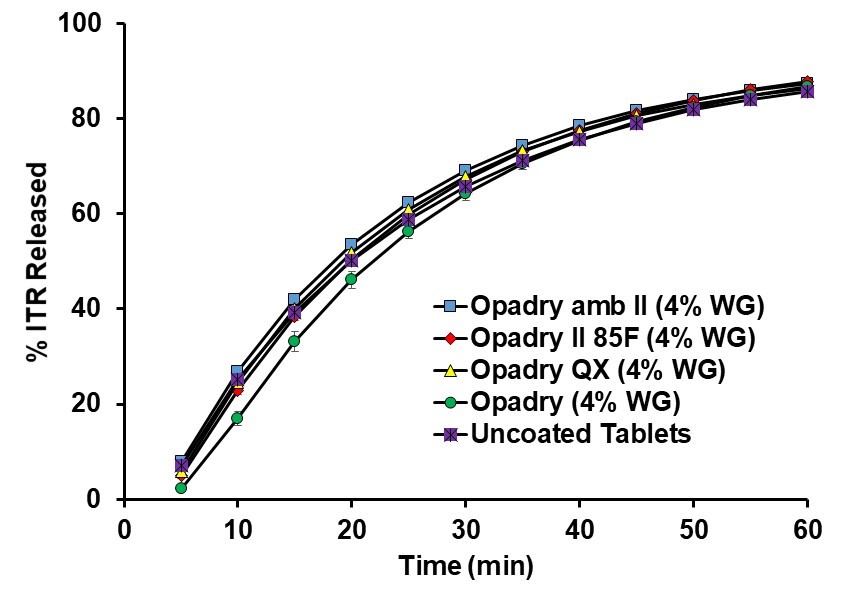