In Silico Optimization of Amino-pyrazole Ureas as Anti-Leishmanial Agents

Purpose: Leishmaniasis is a parasitic disease transmitted by the bite of phlebotomine sandflies.  It occurs in regions of Asia, Africa, South America, and the Mediterranean. Visceral Leishmaniasis (VL) is known to be the most severe form, mainly caused by L. donovani and L. infantum, with clinical presentation of fever, weight loss, anemia, and enlargement of spleen and liver. If patients are untreated, the condition is life-threatening. There are about 50,000 to 90,000 new cases every year.1 Current pharmaceutical treatment options have many unmet needs regarding drug safety, route of administration, cost, shelf stability, drug-drug interactions and efficacy.2 Our goal is to design safe and effective oral agent for treatment of Visceral Leishmaniasis using data from the Drugs for Neglected Disease Initiative (DNDi).

The goal of this project is to design new compounds with potential activity for the treatment of Visceral Leishmaniasis. The compound is expected to have the following properties: (i) good potency against L. infantum; (ii) oral bioavailability, (iii) avoidance of off-target effects, including QT prolongation; and (iv) increased CYP stability.Thirty compounds were designed and screened in-silico for activity as part of a drug-design elective. Compounds will be synthesized in the next stage of the project.

Methods: Data Analyses and Physiochemical Calculations - 427 compounds with potency data from DNDi were utilized and divided into groups with common substructures. A QSAR model was developed using Optibrium StarDropTM software. This model was used to generate new chemical structures to refine properties and activity.

Results: Understanding the structural activity relationship - Amino-pyrazole was selected as the backbone with a urea linker. Matched pair analyses were performed to determined regions that could potentially increase potency against the leishmanial effect. R1 was predicted to favor lipophilic group substitutents and R2 had greater tolerability  favoring hydrogen bond donating/accepting groups.

Generating the predictive QSAR models for potency - The StarDrop auto-modeller is designed to predict the best Quantitative Structure Activity Relationship (QSAR) model to be validated and tested on the experimental data set provided by the DNDi. A line of regression (R-value) was created to determine variability in the data set. Multiple advanced modeling techniques such as PLS, RBF, and the Random Forest Regression Model were used to predict the potency of new potential compounds. The design of these compounds is in the beginning phase and additional results will be included on the poster.

Increasing CYP450 stability - In order to assess liabilities within the compound, a cytochrome P450 analysis was conducted via StarDrop to analyze the predicted metabolic liabilities of the compounds. The newly designed compounds had reduced metabolic interactions via CYP enzymes as indicated by the analysis. 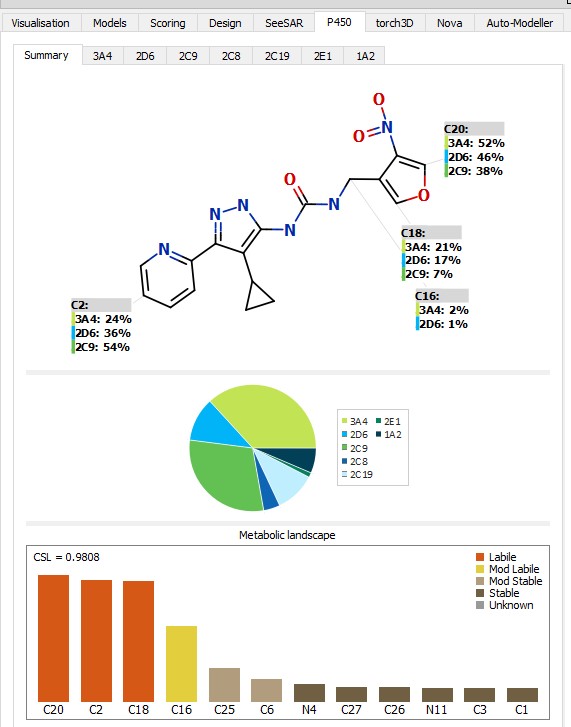 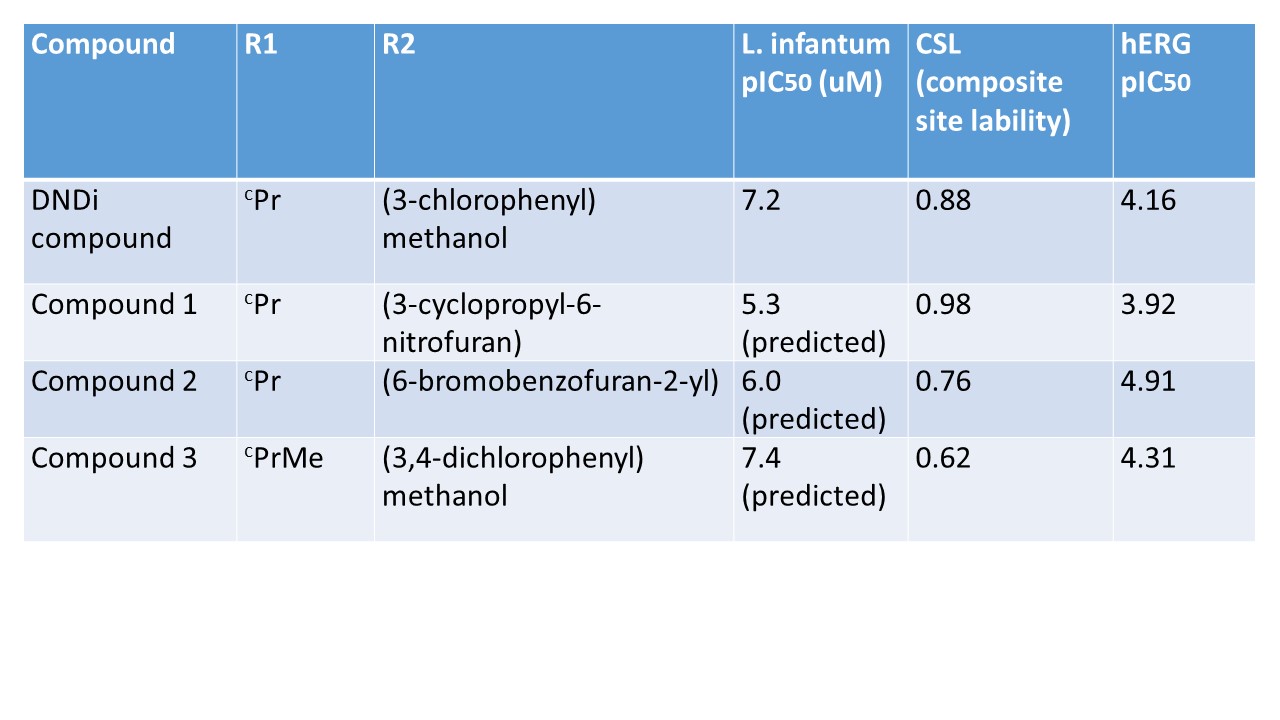