Purpose: Efficient and reproducible powder blending processes are critical to the manufacture of oral drug products. In this work a Discrete Element Model (DEM) was developed for a spray-dried dispersion of a model compound, Z160. This model utilized laboratory scale data to develop an efficient scale-up strategy for blending processes. The DEM model is widely applicable and presents an efficient and cost-savings approach to blending scale-up. Mixture homogeneity is a critical attribute throughout early development, scale-up and commercialization. In the DEM model, a variety of key particle attributes were evaluated including density, shape, size distribution, surface properties, and cohesive strength. Critical process parameters including blender design, rotational speed, filling level, and blending time were investigated. The response factors were set as drug content and content uniformity.  The operating space was generated using a DoE in a laboratory-scale V-blender simulation. The developed DEM model was then used to simulate the pilot-scale blending process to evaluate the change of operating space during scale-up.

Methods: DEM is a numerical method capable of describing the dynamic behavior of discrete particles in a system. The behavior of particles is simulated by solving Newton’s second law and the contact-force model at an iterative discrete time step in DEM. The discrete representation of the material makes this method suitable for modeling particulate solids and processes where large discontinuous deformations take place in the material. This study evaluates the predictive capabilities of a visco-elastoplastic frictional adhesive DEM model for the simulation of the blending process. An FT4 powder rheometer (Freeman Technologies) was used to characterize the mechanical properties of the powders. The test was replicated using EDEM software (DEM Solutions Ltd.) and the contact model parameters were optimized to reproduce the experimental measurements in the FT4 rheometer. A space-filling design of experiments (DOE) technique was adopted using statistical software (JMP®15, SAS) to design multiple runs to produce a set of simulations. Leveraging machine learning techniques, an advanced response model based on artificial neural network (ANN) was fitted to the simulated results. The response model was then used to determine the input parameters, which produced the closest match to the experimental measurements. The DEM model was developed by defining the calibrated input parameters, such as the material properties and interaction parameters. The developed DEM model with optimized settings was used to simulate laboratory-scale V-blender. Changes in operating space that occur during the scale-up process, including batch size and equipment changes, were validated using the DEM model. Pilot-scale blending simulations were then performed in a V-blender, and the results were statistically evaluated with the laboratory-scale results.

Results: Images of the FT4 rheometer simulation during different stages of the test are shown in Figure 1. The instantaneous vertical force and torque on the shaft of the blade were exported from the simulations with a sampling frequency of 20 Hz, which corresponds to the sampling frequency of the physical experiments. The evolution of the cumulative flow energy with penetration depth was calculated. Predictive models on flow characteristics of various excipients were then generated based on ANN for Basic Flow Energy (BFE), Specific Energy (SE) and Conditioned Bulk Density (CBD). The predictive models had high R2 values > 0.98 for all the validation tests. As illustrated in Figure 2, the effects of different material properties on the flow characteristics of the powder were identified. The DEM model with the calibrated settings based on FT4 simulation was then used to simulate a laboratory-scale V-blender. The DEM model simulation is depicted in Figure 3.

Conclusion: A DEM model has been developed as an efficient scale-up strategy for the blending unit operation of a formulation containing a spray-dried dispersion of Z160. For the development of the model, input parameters were defined using a calibration approach. The validated DEM model was used to simulate a pilot-scale blending process to evaluate the change of operating space during scale-up. DEM can be applied as a predictive approach to modeling and scale-up of pharmaceutical blending unit operations. 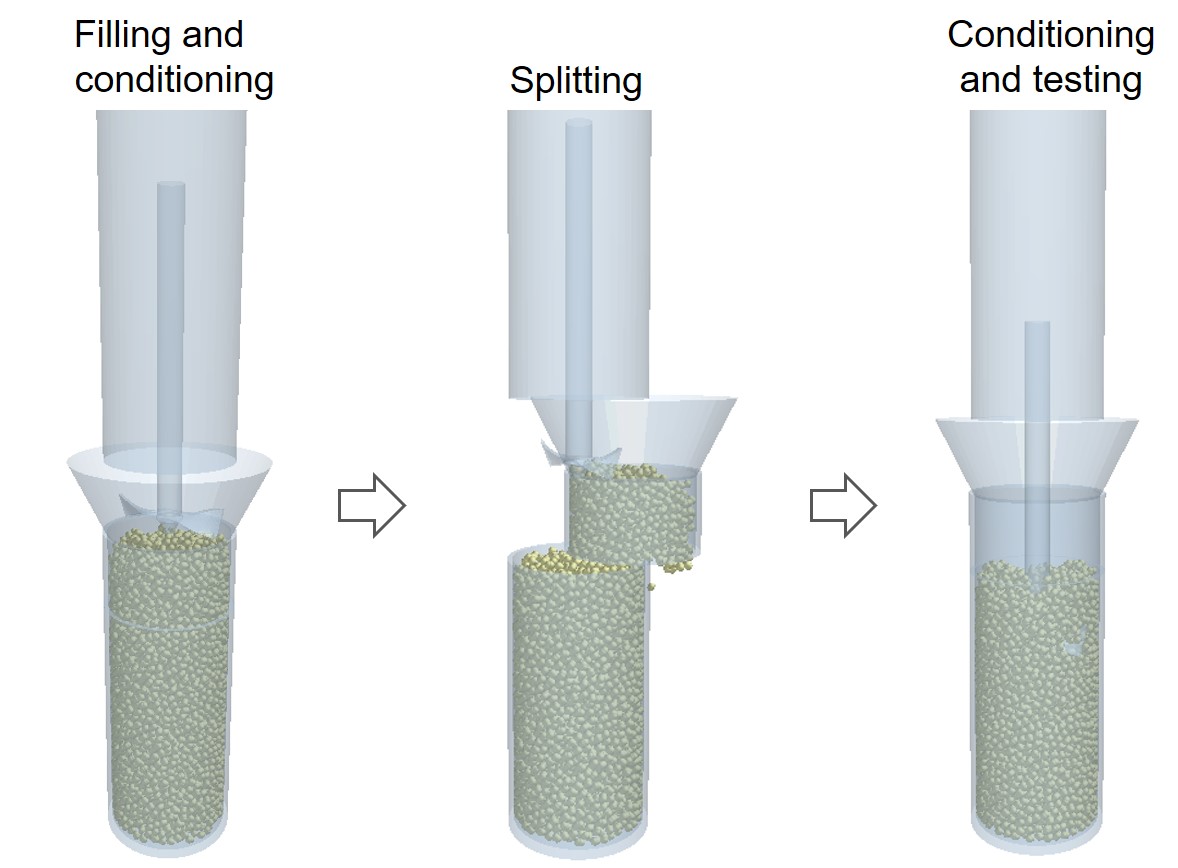 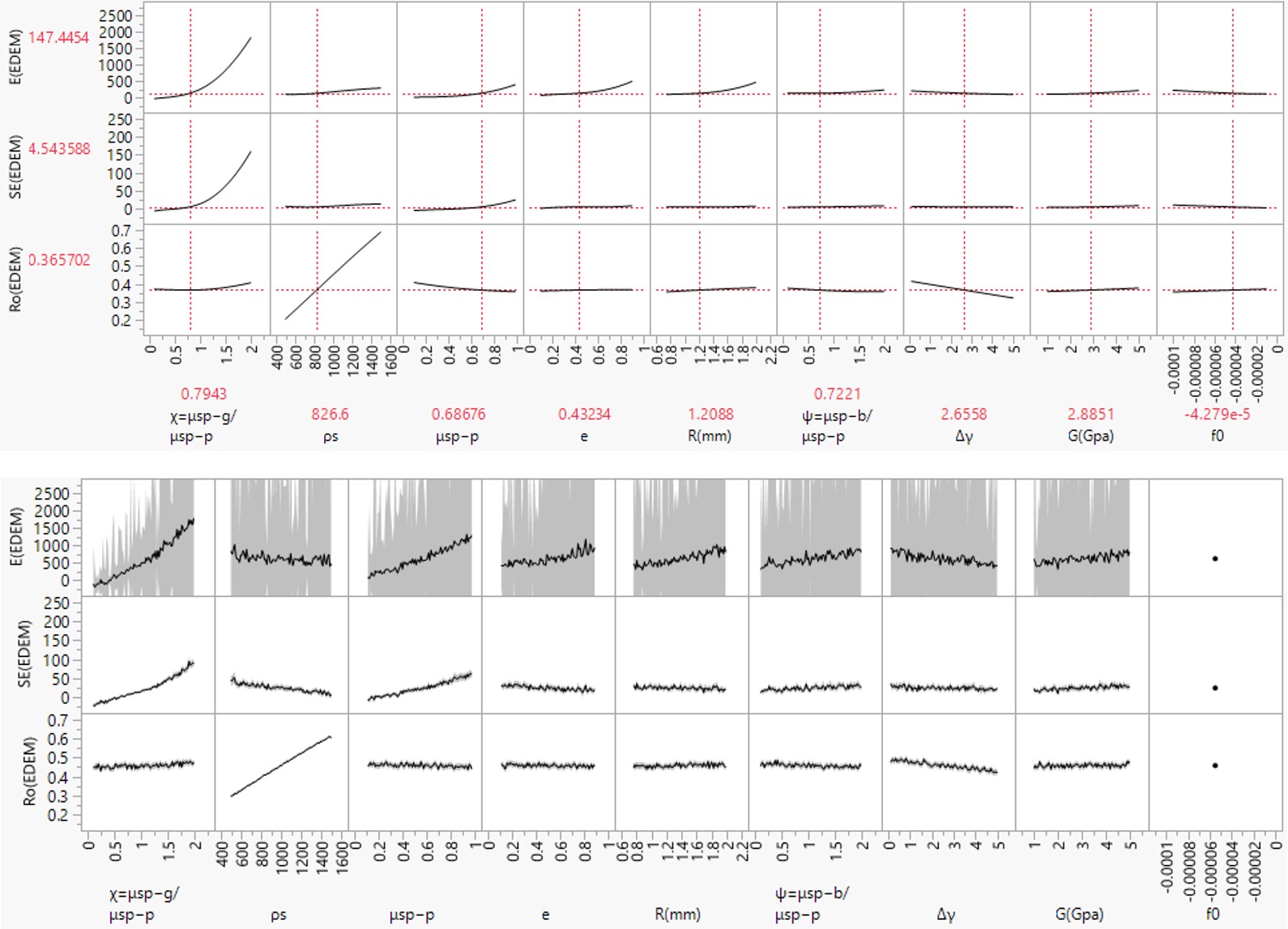 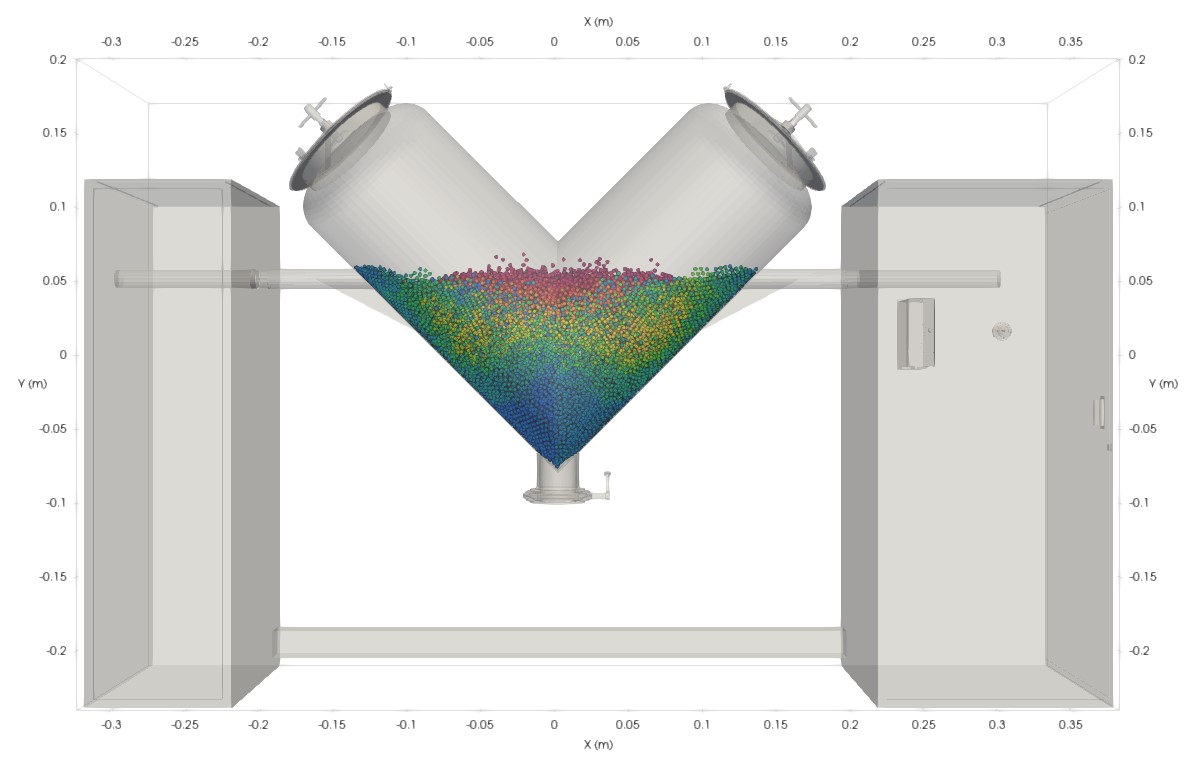